The first ever Australian SAMBO Championship was held 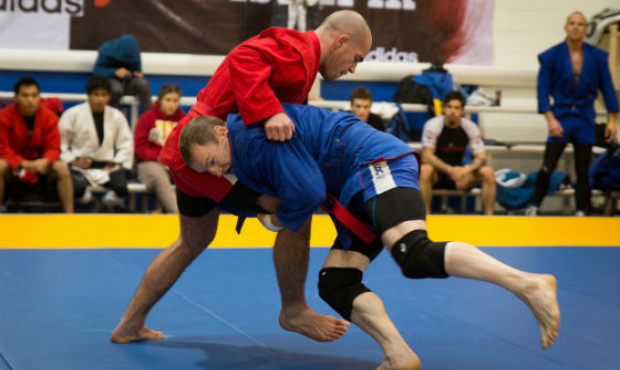 One of the newly minted winners from Trinidad and Tobago – the country where SAMBO has recently developed very successfully, said at the Pan American SAMBO Championship hold in June: “I learned about SAMBO, and fell in love with this combat sport after seminars which were held in our country by Andrew Moshanov”. And now Director of the FIAS Development Department has appeared in Australia. Read in today’s report what came out of it, and how was the country’s first national SAMBO Championship carried out.

The historical SAMBO Championship became the central event of the Australian SAMBO life. The next in order of importance – a seminar, the first of six planned by the International SAMBO Federation in this country. The Australian Championship was held in Sports SAMBO among men and women, in Combat SAMBO, as well as masters in the age group over 35 years set wits to the title of the strongest Australian SAMBO athlete. 60 athletes took part in SAMBO competitions, among which both SAMBO athletes and representatives of other combat sports, similar to SAMBO, were.

It is representatives of judo, jiu-jitsu and mixed martial arts athletes who were delighted with the opportunity to practice unique technical elements, which SAMBO is favourably endowed with – painful leg locks, at the seminar under the leadership of Andrew Moshanov. They appeared to be exactly the flair for the sake of which numerous athletes – representatives of combat sports, allied to SAMBO – have already joined the SAMBO ranks.

Robert Belonogoff, the President of the Australian SAMBO Federation, noted: “The technique, shown by the honored coach Andrew Moshanov at the seminar, convincingly proved the effectiveness of the traditional classical SAMBO school over the “new-fangled tricks” that are often taught under the name of mixed martial arts”.

Andrew Moshanov notes: “At all the seminars that I have to carry out, I always emphasize that there are no new combat sports and new holds do not appear out of thin air. As the saying goes, “everything new is actually well-forgotten old”. And in our case it is the old SAMBO school, which, I think, Australia hasn’t had the opportunity to get to know really. To date SAMBO in Australia has just enormous opportunities. In the near future a series of regional seminars and competitions is planned, as well as a training program of the Australian coaches and athletes at training camps in Russia is being prepared to start.

Terry Williams, the Vice President of the Australian SAMBO Federation shared his impressions on the FIAS seminar: “Today the foundation stone was laid in the establishment of the system of training and national accreditation of trainers in SAMBO in our country. During the seminar all participants managed to learn the basic knowledge of the SAMBO theory, as well as touch the basic skills of SAMBO technique. We plan that the next step will be the opportunity to get coaching qualification approved by the Australian SAMBO Federation by those who wish. Candidates will be able to become its holders only when passing certain tests recommended by the Coaches Commission of the Ministry of Sport of Australia. The test will be impossible to pass without a thorough knowledge of the fundamentals of SAMBO theory and practice, a modern sports administration, sports ethics, sports marketing, and so on”.

Gavin Dixon, Secretary General of the Australian SAMBO Federation, summarized that the national team, which will take part in the World Championship in St. Petersburg, will be organized. And training camp of a week’s duration, which they will carry out together with other teams of the British Commonwealth, will anticipate the participation of the Australian SAMBO athletes in the main start of the SAMBO calendar.

Winners of the Australian SAMBO Championship