St.Petersburg Arena is ready to host Sambo athletes at the SportAccord Games 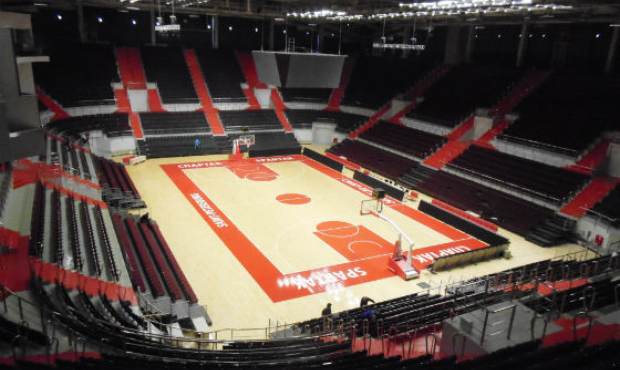 Modern and comfortable, multifunctional and cosy - these are some of the complimentary words said by the guests referring to Arena new Sports Complex at the Opening Ceremony in St.Petersburg. On September 11 Georgy Poltavchenko, Governor of St.Petersburg, Valentinva Matviyenko, Chairman of the Federation Council of the Russian Federation, and Vitaly Mutko, the Minister of Sport of the Russian Federation, opened the complex in a festive atmosphere. Arena threw its doors open to Sambo athletes and Sambo athletes are already getting ready to try the new complex in October when SAMBO tournament within the Program of the World Combat Games SportAccord will be held there.

– At the initial construction stage of the sports complex we chose this particular place for Sambo tournament because it is really good for holding large international competitions. And during all negotiations and meetings with the organizational committee I, as a technical spokesman of the FIAS, pointed out the necessity of holding our tournament at Arena, - says Sergey Tabakov, FIAS Executive Director.

As a result, the construction of the sports complex was quickly finished and it was ready to host athletes and spectators. The complex with the seating capacity of 7,044 was constructed in the shape of amphitheater. The floor covering is made of Canadian maple as at some NBA grounds. In addition to the main ground there are two training arenas, a swimming-pool, a spa zone, 8 locker rooms and halls for dances and yoga in the complex. Moreover, the complex on Krestovsky Island includes a hotel for athletes, a press center and offices.

Despite a very large infrastructure the arena does seem very cosy inside. High bleachers with soft seats are situated close to the ground. There is a good view close to the ground and from the highest seats. Moreover, modern electrical cubic display panel at the roof is very pleasant to one’s eyes. According to the information from the SportAccord organizational committee, during the Combat Games there will be billboard pyramids along the perimeter of the ground.

– Everyone who has managed to visit the new sports complex is thrilled, - continues Sergey Tabakov. – I remember visiting Arena in April this year: we walked around unfinished rooms in hard hats and there were cement and concrete under our feet. And today it is a sport facility of the European level that completely corresponds to all the requirements of multi-sport tournaments. It is also pleasant to note that SAMBO and Sambo athletes will be the first ones to have a house-warming of St.Petersburg Arena within the framework of SportAccord Games.

Life size dolls of Masha and the Bear (the mascots of the competitions) reminded everyone that in October fights of the World Combat Games will be held in Arena. The Dolls were full-rate participants of the opening of the sports complex. And the apotheosis of the event was the basketball match between the teams of St.Petersburg administration headed by Georgy Poltavchenko, Governor, and of basketball amateurs that included Spartak veterans and current club administrators. The friendly game ended in a draw 37:37.