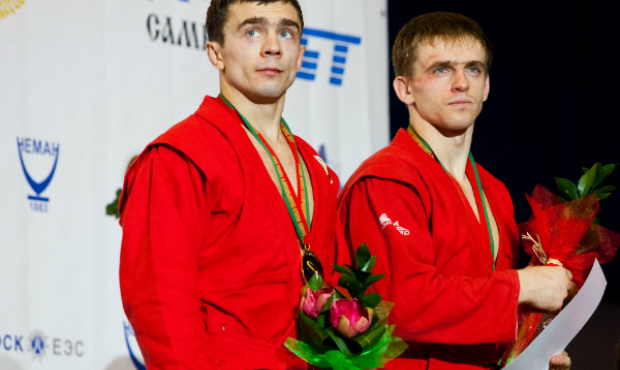 Why SAMBO fighters need to remember their mothers on the eve of a bout? What is the travel speed of Fedor Emelianenko along the Minsk Sports Palace? And why the viewers saw only 7 final bouts instead of 9 ones in the first competition day of the World SAMBO Championship? The FIAS website coverage of the World Championship-2012 in Belarus will answer these and other questions.

“Just imagine your mother standing by the window. She looks at the road and worries about you in her mind. And while setting your teeth you come to the mat and “tear” your competitor. Then you shake his hand and give him a hug after gaining victory”, - with these words Natik Bagirov, a famous Belarusian SAMBO fighter, addressed sportsmen in his interview for the website www.combat-sambo.by on the eve of the World Championship start in Minsk.

Of course, not all the tournament participants read the address of the notable professional though all of them carried out the instructions precisely. It was hard to guess the thoughts that were in the mind of SAMBO fighters before going to the mat. Though they were uncompromising combat and respect of competitors for each other that was evident for every single viewer of the World Championship.

Besides, the Minsk Sports Palace which tribunes admit more than 3 thousand viewers did not manage to sit all those wishing to see supreme level SAMBO. The Belarusians do love and understand this martial art as well as they actively support the favourites.

Being inspired by support of the home tribunes, the Belarusian SAMBO fighters actively sprang into action and got into the finals in 5 weight categories out of nine having won three bronze medals meanwhile. However, after the bright and unforgettable solemn opening ceremony, at photo- and video cameras point as well as after the loud support of fans the Belarusian sportsmen did not manage to get through the strain and yielded in 4 out of 5 finals to their principal competitors, i.e. the Russian team in the evening part of the programme. The fans of the Russian national team should be given proper respect as their sportsmen gained their victories in the competitions followed by the cheers of the local SAMBO aficionados.

The highest decibels were jointly created by the tribunes during the World SAMBO Championship opening ceremony. The sports fans welcomed Fedor Emelianenko, a famous SAMBO fighter, with especially loud applause. He acts already as a distinguished guest and not as a sportsman at this Championship. Fedor’s travel speed in the Arena approximates zero indexes, because as soon as the crowd puller makes a step, he is surrounded by autograph and photo hunters right away. Emelianenko tries not to refuse anyone. When answering the question that was asked by our website if there is a place on Earth where he can walk unrecognized, Fedor said that such places did exist. However, he found it difficult to name them.

The information about Olympic perspectives for SAMBO became one of the reasons for thunderous ovation of the whole sports complex. The news was announced by Vasily Shestakov, President of FIAS. While welcoming the participants and viewers of the Championship during the solemn opening ceremony he announced that the Candidate file on SAMBO recognition as a temporary member of the IOC was under consideration in the International Olympic Committee. “A meeting is going to take place in December and I hope that SAMBO will join the Olympic family”, said Mr. Shestakov.

The viewers which were looking forward to see 9 bouts in the first competition day saw only 7 ones. Uncompromising attitude and tune for fighting of every SAMBO fighter resulted in a major injury of Andrey Kurlypo from Belarus that was taken during the fight for getting into the final. The doctors did not allow him to participate in the final bout. The SAMBO fighter came to the mat to salute his competitor Igor Beglerov from Russia and to receive his silver medal after which he was taken straight to the hospital followed by the respectful applause. Sergey Gluschenko from Ukraine was not allowed to participate in the finals by the doctors either. He also received serious injuries in the preliminary bouts. Having shaken hands with Ali Bagautdinov, the representative from Russia, he turned him into the World Champion and won a silver medal himself.

As it was previously reported by the FIAS website, the national anthem of Russia was heard 7 times at the Minsk Sports Palace in the first competition day. The national anthems of Belarus and Georgia were heard by the viewers one time each. Thus, following the results of the first competition day the Russian national team became an indisputable leader in team placing, the Belarusians, hosts of the tournament, filled the second place and the Georgian team rounded out the intermediate trees.

The change in the placement of forces in the second competition day is coming up soon. Please, follow the World Championship finals through our online broadcasting on the FIAS website.