Working Session of the FIAS Executive Committee Members in Kazan 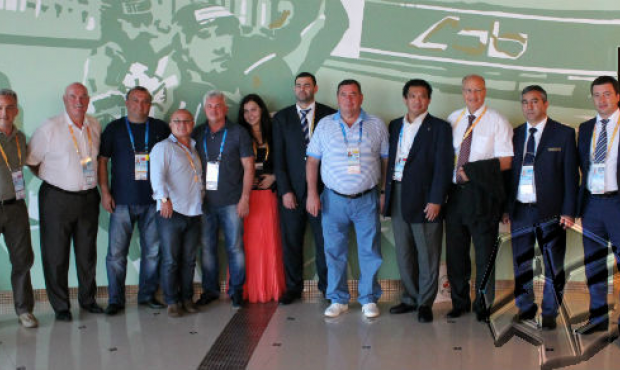 To synchronize objectives and tasks for the nearest future, to sum up the results of the continental SAMBO championships, to outline real matters and prospects of SAMBO in multi-sporting games, as well as to discuss the FIAS strategic objectives – this is the purpose for which the representatives of the main management body of the SAMBO International Federation – Executive Committee – met in Kazan the day before the SAMBO competitions within the XXVII World Summer Universiade.

It is July now, but from May till June there was a season of continental championships in SAMBO. Those starts were knockout competitions for the forthcoming SportAkkord Wrestling Games (October, Russia, St. Petersburg), and for the SAMBO athletes who start to fight for the Universiade medals today, those competitions were the control ones and became the main stage in their preparation for the competitions in Kazan.

“I would remind you that this year the SAMBO continental championships became history as to number of participating countries and their broad geography. Facts speak for themselves. Asia has collected 13 countries, then – Africa with 15 participating countries, representatives of the Pan-American SAMBO found winners among 25 SAMBO countries, Europe has taken the lead, as sportsmen from 29 Old World countries arrived at the European championship in Italy at the end of May. The statistics proves the worldwide interest to SAMBO and shows that our kind of sports is really popular and interesting for development and promotion around the world,” Vasiliy Shestakov, the President of the FIAS, commented upon the outcome of the “continental exams” for SAMBO athletes.

The “continental exams” were earlier, now the so-called “multi-sporting session”, namely, one of its stages – the student stage, will start for SAMBO today. The Universiade in Kazan this year is the first multi-sporting event in which SAMBO takes part . Then the World Games in Kali (Colombia) and SportAkkord Wrestling Games in St. Petersburg (Russia) will follow.

Though we know a lot about the Universiade and Games in the northern capital of Russia, we haven’ heard much about the World games. Sergey Eliseev, the vice-president of the FIAS, cleared up the situation with SAMBO representation in the World Games: “The games in Kali will be very soon, from July 28 till August 4. SAMBO will participate as a demonstration kind of sports. The Games organizers gave us 3 days during which we will hold the exhibition performance and master classes, as well as the Colombia – Russia match meeting with participation of sportsmen of 4 weight categories of each of SAMBO disciplines – sporting (male and female) and combat SAMBO. This is a good format for us. On the one part, we will be able to demonstrate all SAMBO disciplines, i.e. all various techniques. On the other part, team competitions will enable us to “highlight” the emotional component of this kind of sports in the brightest manner and to show its sporting dramatic and spectacular effects.”

Today we will be able to see the dramatic and spectacular effects of the student SAMBO in the Tatneft-Arena Sporting Palace in Kazan or on the FIAS web site in the course of live broadcast of competitions. We would like to remind that the International SAMBO Federation has done its utmost to represent our kind of sports by the largest number of teams in Kazan. The FIAS partially bears the expenses for travel, meals and accommodation for the teams which need in such help. This regards Kazan, but in general, the representatives of the Executive Committee discussed the matters of financial aid from the International SAMBO Federation in the course of their meeting.

“The areas of the financial aid for the National SAMBO Federations (NSFs) are well-known. They include seminars of referees and coaches, purchase of mats and sportswear for sportsmen, compensation of travel expenses. At the present moment the size of aid is considerable and will increase, but this aid will be given to such Federations which work actually and have got the exact development program. And this is not a prerequisite, this is a real necessity, necessity in synchronization of our actions – actions of the FIAS and National SAMBO Federations,” Vasiliy Shestakov, the President of the FIAS, commented upon the matter of the financial support to the NSFs.

At the end of this working session the participants discussed the forthcoming events, namely, SAMBO competitions during the Universiade. All members of the FIAS Executive Committee noted the high-level organization and conduct both of the Universiade and SAMBO competitions. The members stated that the arena for the student SAMBO is 100 % ready. They appreciated not only its functionality and purposefulness, but also aesthetics and style. The SAMBO athletes of the following weight categories: 52, 68 and 90 kg – for males and 72 kg – for females will enter such arena – functional and purposeful, aesthetical and stylish. As to us, we will tell you about all peripeteias, sensations and interesting particulars of such fight in our today report.