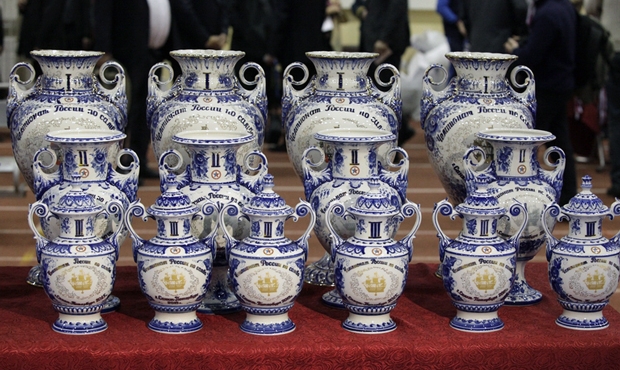 The first European Games in history will take place in the capital of Azerbaijan from June 12 to June 28. The quota for sambo wrestlers’ participation in this European sports forum was created on the basis of the European Championship 2014 (Bucharest, Romania). Judging from it, the Russians as the founders of "Self-Defense without Weapons" and, of course, the leaders of the world sambo, have their right to be represented in the competition within all 8 weight categories of the tournament. At the Russian Sambo Championship which took place in the past few days in St. Petersburg, they announced the names of sambo wrestlers, who are going to compete in Baku for the most prestigious awards in the history of the first European Games.

The head start of Russians which was qualifying not only for the European Games, but also for both continental and world championships, took place at the Winter Stadium of the Northern Capital of Russia. Over 400 participants representing about 70 regions of the country; coverage – from Kaliningrad to Sakhalin. The qualifying principle is simple. The champion wins the pass to the world championship in Morocco (Casablanca, November), the silver prize-winner prepares for the Old World championship in Croatia (Zagreb, May). The gold winners of the Championship of Russia within weight categories of 57, 74, 90 and 100+ kg for men, and 52, 60, 64 and 68 kg for women also guaranteed their participation in the European Games in Baku. Our today's article is about them. The head coach of the women's national team, Yury Borisochkin and the mentor of the men's team of sambo wrestlers, Dmitry Troshkin will tell you about sambo team, which will present Russia at the Baku Games. 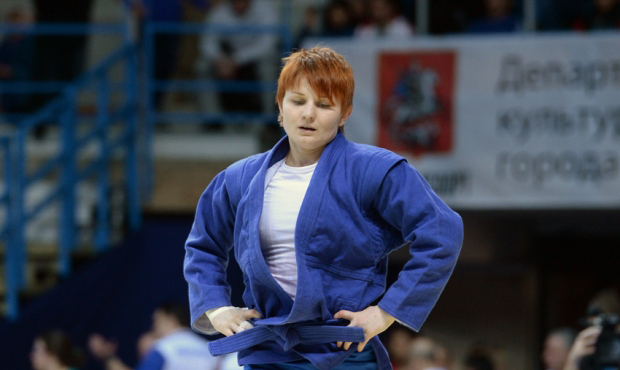 The pass to the Baku Games 2015 within the category up to 52 kilograms was won by Anna Kharitonova from Moscow. In the final, she gained an advantage of her competitor from Krasnodar Anna Gorelikova. "Unfortunately, the leaders of the past years, Diana Aliyeva and Anna Kharitonova from Moscow got to one subgroup and met in a wrestle to come through to the final. If it turned out to be another draw, perhaps they could meet in the final,” said Yuri Borisochkin. “Nevertheless, Anna Kharitonova showed bright wrestle, and we hope she will also perform the same at the first European Games. She’s a confident athlete. Good for her!” 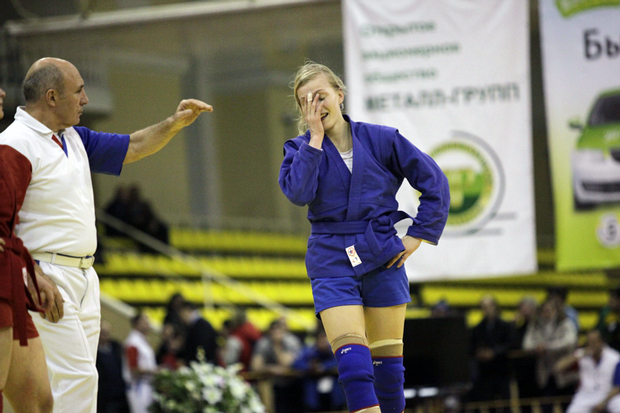 The selection to the European Games in Baku in this category was passed by Svetlana Burtseva from Perm Oblast. "In this category there was a difficult situation,” Borisochkin noted. “Last years’ leaders Yana Kostenko and Tatyana Zenchenko (who passed from the category of 56 kilograms), did not manage to make it to the final. Sveta Burtseva and Nastya Shinkarenko from Moscow area met in the final battle within this weight. Svetlana participated in the European championship, but failed. One could say she is a “home fighter”. We hope, her trainer Valery Rakhmulin will prepare her well for the international competitions, will also work with her at the meeting."

Within this weight category Anna Shcherbakova from the Republic of Buryatia, who defeated Ulyana Bessonova from Penza Oblast, became the champion of Russia. "Anna Shcherbakova, the debutante of the national team, however performed excellent, she came won everything", the mentor of the women's team noted. 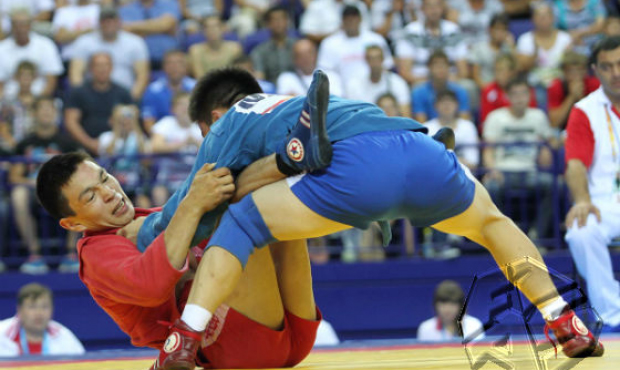 Within the category of 57 kilograms, the gold prize and the pass to Baku were won by the representative of Sverdlovsk Oblast, Aymergen Atkunov, the current champion of Europe. In the final fight he defeated Sayan Khertek from Moscow. "Both sambo wrestlers had training at the national team, and both of them fought in the World Cups. Now Atkunov is going to perform at the European Games,” noted Dmitry Troshkin.

There was a serious competition for leadership within this weight category; traditionally there is the largest number of participants within this weight category. "There has always been a furious competition within this category, and it makes the victory of Azamat Sidakov, representative of Stavropol, even more valuable,” noted Trochkin. “He participated in Sambo National Championship for the first time, and his debut was a triumph. Azamat made all the pre-fights a very bright performance, and in the final with Ali Kurzhev from Ryazan, made a pure victory, in just a minute. The hall gave a standing ovation." 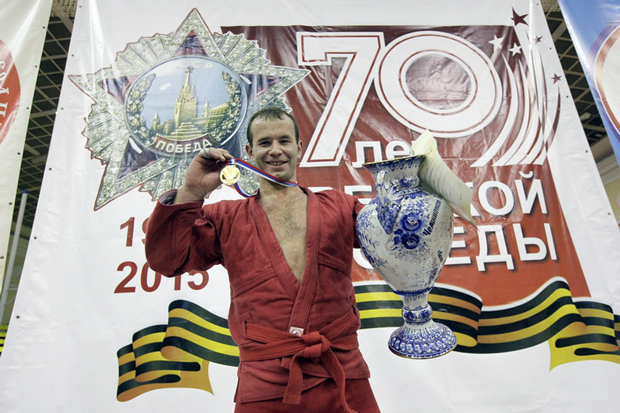 Within the category up to 90 kilograms, there were many contenders for the leadership: three world champions, the champion of Europe and winners of youth championships around the globe; the competition turned out to be very serious. In the final, the team leaders of the last year, Arsen Handyazhyan from Krasnodar Krai and Alsim Chernoskulov from Sverdlovsk Oblast, met.

"The fight was beautiful, fascinating. We saw reaps, hip and overhead throws; both wrestlers were dislocating. They showed a great technique arsenal,” said Troshkin. “The fight was open, magnificent, and the three-time world champion Alsim Chernoskulov won. He will also represent Russia at the first European Games in Baku." 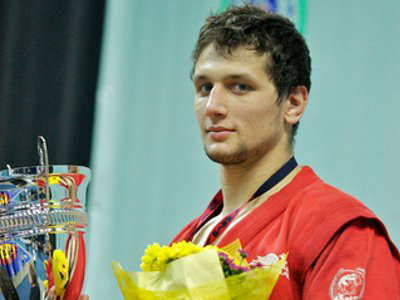 Within the super heavyweight, the coaching staff was hoping for successful performance of the current world champion Artem Osipenko (Bryansk), and in the end he became the best, though the victory was not easy for him. "Artem won, but it was difficult. In the final, he was confronted by Rustem Arslanov, the giant, weighing 160 kilograms and 197 centimeters in height,” told Dmitry Troshkin. “Artem has much smaller constitution, but he drew up the fight skillfully, and won tactically. In a couple of moments he could come with a throw, but he decided not to take any chances. In general, it was good for him - a chance for the World Championships and the Games in Baku 2015 was at stake.

At the first European Games, which will take place in the capital of Azerbaijan on June 12-28, 2015, 253 sets of medals will be awarded. The program of Games included competitions in 20 sports, 16 of which are Olympic sports. For the athletes of 12 sports, the Games will become a stage of qualification selection to the Olympic Games 2016 in Rio de Janeiro.

About 6.5 thousand athletes, who will represent 50 National Olympic Committees of the continent, will take part in the First European Games. According to preliminary calculations, the heads of at least 20 states will visit the European Sports Forum. Over 50 television companies of the world became owners of the rights for demonstration of the European Games. 12 thousand volunteers will be involved in competitions.

Sambo tournament within the European Games will take place on June 23 in recently reconstructed sports and concert complex named after Heydar Aliyev. In Baku, Sambo will be represented by the athletes from 20 countries of the continent within 8 weight categories: 57, 74, 90 and 100+ kg for men and 52, 60, 64 and 68 kg for women.