Sambo Spain: ready for the Youth Championship and its own progress 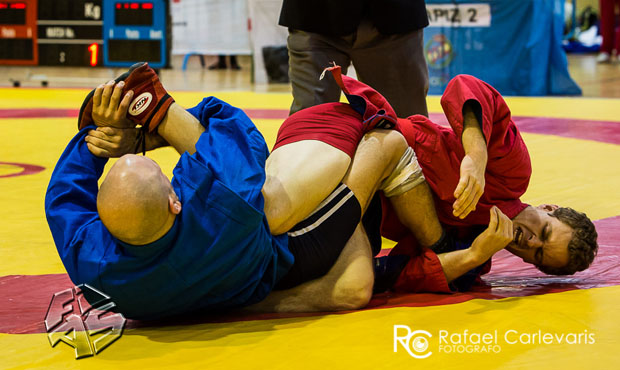 In the near future Spain intends to promote development of Sambo in its country and will be able to demonstrate serious results at international level. That is the conclusion made by Roberto Ferraris, FIAS Secretary General, when he visited this country in February. The Italian expert met the Chief of Sambo in Spain, visited the national championship of the country, and carried out technical inspection of the facilities prior to the European Youth Championship to be held in the Basque Country this April.

Sambo is a separate discipline in Spain included into the Spanish Federation of Olympic combat sports and related disciplines. That particular Federation is engaged in development of Sambo in the country and organisation of national tournaments. Spanish National Sambo Championship took place in Madrid on February 23. Competitions in 9 weight classes for males and 8 weight classes for females were held at three mats in the National Academical Sports Center. The tournament gathered participants from across the country fighting ardently for the medals of the Championship.

- I was pleased to notice that Spain has preserved strong traditions of Sambo and there is a constant development of martial arts – shares his impressions Roberto Ferraris. - I believe that in the near future FIAS will focus its efforts on developing a strong team of judges in Spain and holding master classes for local athletes. This will help to improve technique of Sambo wrestlers which will naturally have a positive effect on their results in the international arena.

"I believe that in the near future FIAS will focus its efforts on developing a strong team of judges in Spain and holding master classes for local athletes".

At the championship FIAS Secretary General discussed the development of Sambo with Angel Lopez Rojo, the President of the Spanish Federation of Olympic Combat Sports and Associated Disciplines. According to him, Sambo has hardly ever before been seen in such a good situation as it is now. Over the past 5 years this combat sport has made a big step forward and it has extensive prospects opened to it. Angel Lopez Rojo expressed his personal gratitude to Vasily Shestakov, the  President of the International Sambo Federation, and Sergey Eliseev, the President of the European Sambo Federation, for their support of Sambo in Spain.

Then Roberto Ferraris’s program of visit to Spain included technical inspection of the facilities of the future European Youth Championship. During this work FIAS Secretary General was assisted by the Technical Director of the Spanish Wrestling Federation Javier Iglesias Serna.

"Following the negotiations, I can say that in April we will see a well-organized championship".

- He is a real professional who is not only the right hand of the Federation’s President, but who is also really in love with Sambo - says Roberto Ferraris. - We went to Caceres (a town in the autonomous community of Extremadura) where we had an important meeting on preparation for the tournament. Following the negotiations, I can say that in April we will see a well-organized championship. The competitions will be held in a wonderful sport complex, athletes and coaches will be able to stay in one of two four-star hotels and a well-established team of organizers will do their best to make everything go in a perfect way. The main promoter of the upcoming event, Jose Maria, the President of the Wrestling Federation of Extremadura, is a person who is deeply in love with Sambo.

They say in any business the most important thing is the human resource. It seems that in Spain everything is fine in this respect. And it means that we can look forward not only to a bright and memorable Youth European Sambo Championship in April, but major successes of Spanish Sambo in the international arena in the future.

[Photogallery] National Sambo Championship in Spain 2014
Share
Blog
Recent photos
Latest news
Recent videos
Latest news
Follow latest news You are subscribed!
Thank you! Your confirmation email has been sent to your email.
This website uses cookies to ensure you get the best experience on our website More info Got it!