SAMBO wrestlers in red win more often than those in blue 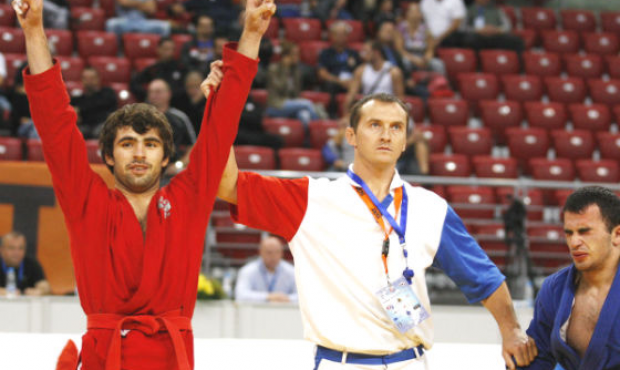 Cyclists, skiers and biathletes dream of putting on a yellow jersey of the leader. This piece of clothing helps to single out the leading sportsman among competitors in these sports. According to the statistics, now SAMBO wrestlers also have a piece of clothing to dream of. According to the results of major last year championships, it turned out that during the finals sportsmen in the red uniform win more often than those in the blue one.

Analysis of the videos from the Finals 2012 of the World Championship in Minsk, the World Youth Competition in Sofia and the World Cup among students in Kazan shows that SAMBO wrestlers in red jerseys and shorts have more chances to win than their opponents in the blue uniform.

However, it should be noted that at The World Senior Championship statistics in favor of the red ones was minimal: only by one victory more. Meanwhile youth and juniors at the World Youth Competition showed greater perception to colour differences. Out of 16 finals that were broadcasted by Bulgarian TV, SAMBO wrestlers in the red uniform won 12 of them and those in the blue one won only 4. The same difference was demonstrated by students at the World Cup in Kazan. According to the results of 18 fights, SAMBO wrestlers in the blue uniform managed to win only 5 times. Other 13 fights ended with the victory of contestants in red jerseys and shorts.

It’s up for everyone to decide whether to believe this statistics or not. But sportsmen are not in vain considered to be very superstitious. That’s why it shouldn’t be surprising if during the next competition some SAMBO wrestlers will try to do everything possible to gain the right to perform in the red uniform. And attention should also be paid to the fact that according to SAMBO rules participants of competitions come to Opening and Closing ceremonies, as well as to the award ceremony in the red uniforms. It is not for nothing.