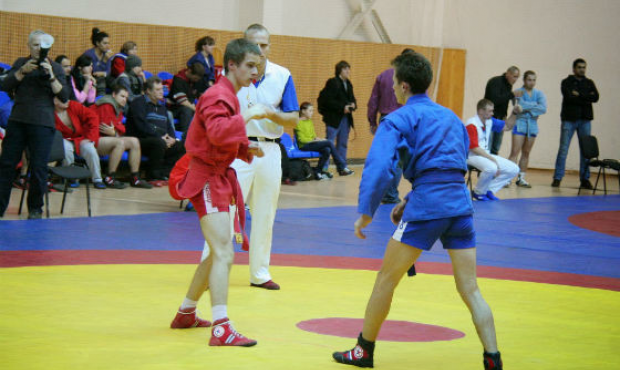 The Moscow Open SAMBO Championship among athletes with health restraints was held at the Moscow State University of Instrument Engineering and Informatics (MGUPI) Palace of Sports on September 29. The blind and visually impaired, deaf and hearing-impaired participated in the competitions, and fighters with the problems of the musculoskeletal system – in the exhibition performances.

The Championship traditionally began with a competitors’ parade. Sergey Baydakov, the President of the Moscow SAMBO Federation, greeted the athletes. He stressed the importance and significance of SAMBO tournaments for people with health restrictions. Eduard Filbger – General Director of the Deshele Company, which became the sponsor of the Championship – also talked on the serious role of such competitions for the disabled. He handed over a check for 500 thousand rubles for a complicated surgery for a daughter of Victoria Potapova – a three-time Paralympic medalist and a regular member of SAMBO Tournaments for the disabled. Daughter Victoria is 2.5 months old, and she was diagnosed with cancer of eyes. Currently she is receiving treatment in the USA clinic.

Exhibition performances were held before the competitions. Valentin Budarin, the world’s only SAMBO athlete-wheelchair invalid showed a large range of SAMBO holds. Despite serious health restrictions, he showed a high level of training, his performance was clear and spectacular.

– I was struck by the exhibition performance of Valentin with a healthy athlete. I have never seen a wheelchair-using athlete participating in a demonstrational fight. Iron men! Without exaggeration, it’s really worth it! Guys with a disability have a great strength of mind, and these guys perform very professionally, – shared Sergey Baydakov. He also noted that the Moscow SAMBO Federation have held SAMBO competitions for the disabled for the past three years thereafter, and in the future they will continue to organize such tournaments.

– For us, these events are an additional start. Unfortunately, few of these tournaments are held around the world. In my opinion, no one except the Moscow SAMBO Federation does it. I hope that the initiative will be also seized elsewhere in the world, – commented on Islam Ibragimov, Chief Coach of the Russian National Judo team among the blind.

Vasily Emelyanov, the President of the Martial Arts Federation of the Deaf also noted the importance of SAMBO tournaments for deaf athletes. In addition, he stressed that this Championship was the qualifying for the deaf fighters to the Championship of Russia.

Following the results of the tournament winners and medalists received medals as well as valuable prizes from the general sponsor of the Championship. The Moscow SAMBO Federation plans to hold the third Open SAMBO Tournament among athletes with health restraints Preodolenie in April next year. All SAMBO athletes with health restraints are invited to take part in this tournament, which will take place in Moscow (Russia). Complete information about the event can be found at the Moscow SAMBO Federation.