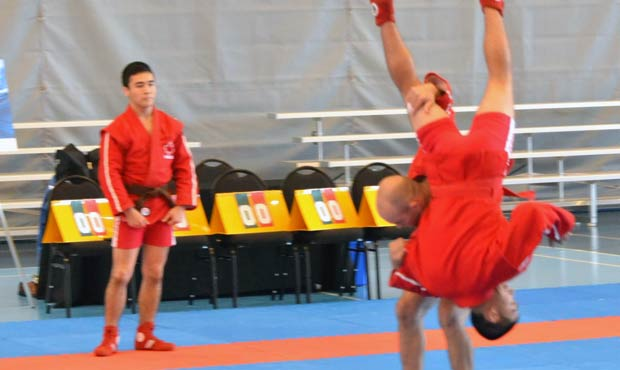 On September 3–7, the city of Richmond, Canada, hosted the first-ever TAFISA Martial Arts Games which also included sambo competitions. The games in the country of the maple leaf were held under the patronage of the International Olympic Committee. The competitions of amateurs of single combats and martial arts were held on the most famous Richmond Olympic Oval – the stadium where the 2010 Winter Olympics were held.

About 350 athletes from 11 countries of the world took part in the competitions and presentations of the Games. Sambo included in the program of TAFISA Martial Arts Games was represented by the Sambo Federation of Canada in collaboration with the International Sambo Federation. The presentation of “weapon-free self-defense” in Richmond stipulated the exhibition format and the work of the exposition stand.

Sambo exhibitions started on September 4. The main heroes were Canadian athletes – members of the Canadian national sambo team. The audience and experts of the world of martial arts and single combats worthily appreciated bright and amplitude throws of sambo athletes, and also the distinguished self-defense technique and elegant holds in ground position.

The exhibition stand of the International Sambo Federation decorated in the FIAS corporate style and sambo colors organically mixing with the red-blue sambo uniform also aroused much public interest. During four days the representatives of FIAS and Sambo Federation of Canada held a number of working meetings and negotiations. In particular, Ju-Ho Chang, President of TAFISA, and Wolfgang Baumann, Secretary General of the organization participated in the discussion of future prospects of sambo development within TAFISA movement.

Besides the top members of TAFISA, the representatives of FIAS and Sambo Federation of Canada got a chance to talk with the leaders of sports organizations from the United States, British Columbia and some of the western provinces of Canada which are interested in sambo development and promotion.

The sambo debut at the first-ever TAFISA Martial Arts Games turned out to be such a success.