SAMBO at the World Games in Colombia: a view from within 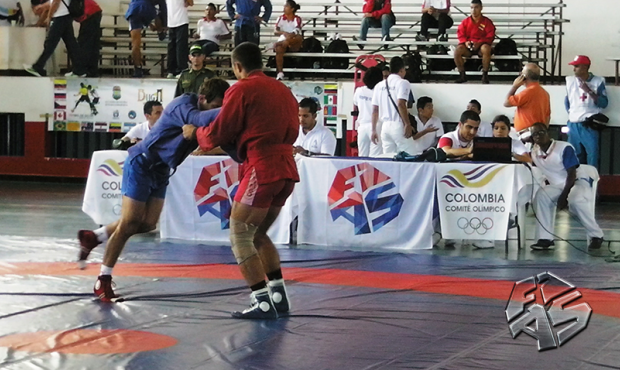 On our website Anna Kharitonova - European champion and winner of the 2013 Universiade in Kazan in her diaries from Colombia told us all about what's happening at the SAMBO event of Games. Today, through the mouth of the FIAS specialist working in Pan America - Tigran Karganyan we will tell you about the new edges of the last World Games in Colombia.

SAMBO Tournament as part of the World Games in Colombia was held in the city of Buga. In the same place the audience could enjoy other two sports that was the part of the presentation program of the Games - futsal and kudo. Comparing martial art with the game - a thankless task, but viewers, of course, compared kudo with SAMBO. And unanimously said that SAMBO is much more spectacular and dynamic, and a lot of spectators came to the SAMBO competitions. To all of them the International Federation of Sambo gave souvenirs and gifts, and children were presented with SAMBO equipment. So the recruitment of children to SAMBO clubs and schools in Buga certainly will now begin to grow rapidly.

The growth of popularity of SAMBO in Colombia and its further development and promotion in the country was discussed at official meetings, which were part of the Games in Cali and Buga and were held by FIAS specialist working in Pan America Tigran Karganyan. The Mayor of Buga, the city where the tournament was held, Mr. John Harold Suarez mentioned the interest of the authorities in the development of SAMBO, and expressed the wish that this city has become in 2015 he capital of the Pan-American Championship of SAMBO.

Let us remind that in 2014 this continental championship will be held in Trinidad and Tobago. Mr. Suarez attended all official events and ceremonies of SAMBO, and despite the tight schedule, was even able to watch the fights and demonstrations, highlighting the entertainment and attractiveness of our martial arts.

Tigran managed to talk with Mr. Armando Farfanom - a member of the executive committee of the National Olympic Committee, the Head of Mission of the Colombian delegation to the World Games IX. It was he who told Tigran about the background of these Games: it turns out that the capital of the World Games was supposed to be German Dusseldorf, but because of the economic crisis, the Germans abandoned the preparation and staging of the Games. Second on the list of candidates to become the capital of the Games was Kali, and although the Colombians know about his lucky chance just the year before the start of the Games, they prepared them very well. Mr. Fanfan also noted that SAMBO tournament was the highpoint of the World Games in Colombia and noted the growing interest to SAMBO in his country.

In Colombia, Tigran Karganyan met with leaders of sports close to SAMBO - Judo and Wrestling- President of Colombia Judo Federation Hernando Arias and Technical Director of the World Games, which this year will run for the post of President of the Wrestling Federation of Colombia - Jose Luis Echeveriya. With them it was agreed to unite and work together because, precisely because of this cooperation, representatives of all three types of martial arts would be able to enrich themselves and thus become stronger. As a result of a working meeting, parties managed to negotiate on holding of a series of workshops by Tigran Karganyan in Colombia, the first of which will take place in September.

It should be mentioned that the city of Buga in which SAMBO Tournament as part World Games took place - from the sports point of view - is unique. It turns out that the strongest Colombian school of wrestling based here, and 2 Olympic medalists (2008 and 2012) are trained here.

This city is also a center of pilgrimage for Colombia and is famous throughout the country for its unique monasteries. Members of the Russian SAMBO team were able to see that the aura here is unusual and sacred places helps. Exactly after a visit to one of the most famous monasteries of Buga, has finally lost luggage of Russian coach Sergei Portnov was found, and iPhone of Diana Aliyeva previously lost in Buga, was miraculously found and delivered to the airport in Kali and handed to a happy owner just in one hour before her flight to Moscow. We have not yet heard about the rest of the wonders, but we sure they are make come true!

So, all those Pan-American athletes, coaches and team leaders and federations who are planning to participate in the Pan-American SAMBO Championship in 2015 certainly must make a wish before leaving for Buga, because that is the place where they come true!