Sambo in Moscow — 75 years of victories! 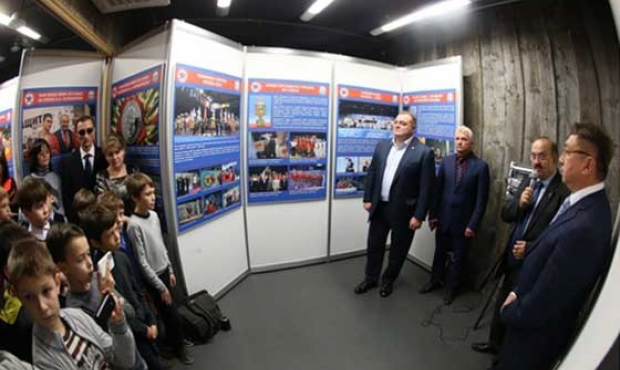 The photo exhibition with this name opened in the Russian capital on the 13th of November. On this date in the creative workshop of the sculptor Alexander Rukavishnikov a solemn opening ceremony of the exposition took place. The exhibition confined to the All-Russian day of Sambo became a sort of the presentation of achievements of the Sambo Federation of Moscow. The exposition reflects the modern stage in the development of this combat sport in the Russian capital and in the country on the whole.

On the opening ceremony of the exhibition a crowd of spectators gathered. It was especially pleasant to see in the museum young Sambo athletes who were looking at the photos of famous sportsmen with admiration. Honoured guests, leaders, sambo veterans and the event organisers were actively discussing the exhibition stands marking good shots, the most interesting historical facts. All shared their memories with pleasure.

The President of Sambo Federation of Moscow Sergey Baidakov told how the idea of creation of such an eminent creative project appeared:

– We remembered the 70-th anniversary of sambo when a big festival took place on the Red Square. And we decided that we still except for celebrations and competitions had to do some presentation of our achievements. We wanted to show how fast moving sambo was. There are some very good results.

While talking about the achieved results, Sergey Baidakov admitted the increasing number of the people going in for sambo in Moscow. For the five years the number of sambo divisions in sports schools of Moscomsport doubled. The number of sambo clubs increased by three times at the places of residence. As of today sambo is on the fourth place after football, swimming and track and field athletics in the number of the people going in for sport in sports schools of Moscomsport. So, sambo left more than 80 kinds of sport behind, a variety of Olympic disciplines.

In addition, as it was emphasized by Sergey Baidakov, for the five years Moscow held a number of international competitions: European Sambo chambionship, traditional annual tournaments of the President of the Russian Federation in Sambo, World Sambo Super Cup “Memorial of А.А. Kharlampiev”. The sportsmen from Moscow for this time won the team championship of Russia three times. It is interesting that since 1986 the select team of Moscow could not achieve this result. And now after a 26-year break in 2010, then in 2011 and 2012 the Muscovites kept the superiority among all federal districts of Russia.

As it was declared by the President of the Sambo Federation of Moscow, the organisers tried to reflect the most important factors in the exhibition stands. The exposition turned to be not entertaining, but informative.

– Of course, it is intended for the boys, young Sambo athletes. But I think everyone will find useful information here. Even those who (Lord forbid!) do not go in for Sambo, – smiled Sergey Baidakov.

– On this holiday, on the birthday of sambo 110 Russian towns will hold competitions and celebrations. And the Sambo Federation of Moscow made another way: in addition to the traditional events they organised a photo exhibition. It can be used as an example for all regions.

Sergey Yeliseev paid a special attention to the exposition content. He emphasized that sambo in Moscow has a 75-year history, but on the whole the events presented here are modern – the tournaments that are held in Moscow, active programs for sambo development.

– There is information about the biggest competitions of the international level. Happy faces of the champions, symbolic figures, teams... Beautiful decorations – it is clear that the Sambo Federation of Moscow put the heart and soul into it, – the President of the All-Russian and European Sambo Federations commented the exhibition. – If every region will organise such an exhibition in their territories, and then we all will combine them and release the monumental photo album for the next Sambo anniversary – it will be a grand campaign. I think it is a very good idea, very important for the children who are beginning to go in for Sambo.

The shrewd choice of the site for holding the exhibition was admitted by the Director General of the Educational centre Sambo-70 Renat Layshev:

– At once a question appears – why is the exhibition held in the creative workshop of the sculptor Alexander Rukavishnikov? Sambo… Then you begin to grope for an answer – may be because Alexander Rukavishnikov is also related to sport, to combat sports. And indeed because sambo is a part of our culture, a part of the country’s history. Here you definitely realise that your life was in sambo, you see your friends, colleagues. You see epochal events combined in one exposition.

Renat Layshev emphasized that similar creative projects – it is very important, and it is necessary for people. He promised that he would advise his friends to visit the exhibition, he also declared that he was planning to visit it again already with his family.

– There is a part of history here relating to Sambo-70. For us 2013 was marked with important events. Our school was honoured to receive the Russian President, the mayor of the city, the Minister of Education, the Minister of Sport, many famous people during the opening ceremony of the palace of combat sports, a new sport building of the Educational centre Sambo-70. It is a part of history that I am proud of. And it is included into the exposition, – emphasized Renat Layshev.

The exhibition “Sambo in Moscow – 75 years of victories!” will be open till the 18th of November. The entry is free for everybody.