SAMBO in Police and Army of Republic of Guyana 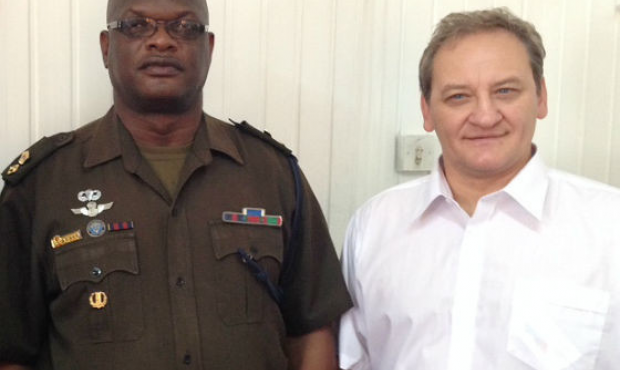 Not so long ago, we wrote about how SAMBO “gets accustomed” in the US defense and law enforcement agencies on our website. Today we have news of how our martial art finds its “niche” in the police and army of South America, namely, in the Republic of Guyana. This is the topic of our today's reporting.

Not long ago, following the seminars held by Ivan Morozov and Alexander Perepelyuk, the representatives of the FIAS presentation group, in the United States for the FBI agents and the police, Vasily Shestakov, FIAS President, said in his interview to ITAR-TASS news agency, “Today SAMBO is considered as a part of various training programmes for defense and law enforcement agencies in many countries. SAMBO offers a variety of self-defense techniques that perfectly suit defense and law enforcement agencies. We are definitely going to develop this direction.”

Less than a week passed and his words were confirmed with fresh information regarding the introduction of SAMBO to the training of the defense and law enforcement agencies. We are talking about the Republic of Guyana, the state in the north-east of South America. This country has good traditions in boxing, judo is well-developed, and SAMBO is gaining strength as well. As a result, the first in the history Pan-American Championship bronze medal was won by Paul Ignatius for his country in the category of 62 kg in combat SAMBO in Panama in June this year.

It should also be noted that SAMBO with its roots lying in Russia is actively supported by the Embassy of Russia in Guyana. It is worth mentioning that Nikolay Smirnov, Russian Ambassador to Guyana, personally attended and congratulated all the participants of the official opening ceremony of seminars held by Andrey Moshanov, FIAS Development Department Director, in the defense and law enforcement agencies of Guyana.

Two most important decisions regarding the use of SAMBO in training of the army and the police forces of this country have become the result of the seminars and public meetings of the FIAS representative and management of defense and law enforcement agencies of Guyana.

Supreme command of the army of Guyana has approved a mandatory three-week SAMBO course for new recruits. 10 army physical training instructors have completed the first initial seminar and now SAMBO will necessarily be included in the daily four-hour sessions on the physical training in the army of Guyana. The same decision was made by the police senior management. As we can see, the representatives of the defense and law enforcement agencies of Guyana liked SAMBO and its powerful practical aspect. And what is most important, SAMBO has moved from the amateur level into the area of compulsive measures.

So, we can say with confidence that Guyana SAMBO gave us another point on the map called “SAMBO in the defense and law enforcement agencies.”