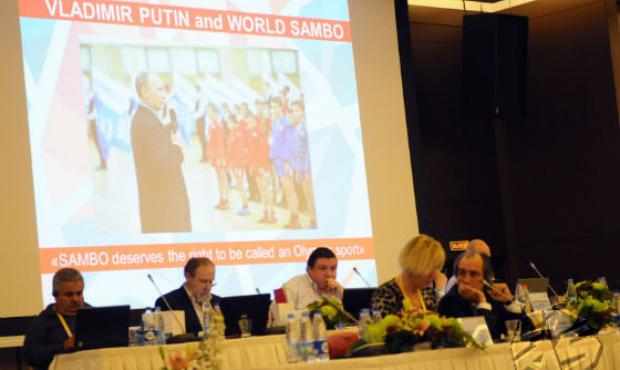 76 Congress of the International Sports Press Association (AIPS), Russia, Sochi – the capital of the future Olympic Games, which will be opened in 298 days from the day of the Congress start. The official opening ceremony of the AIPS Congress – the main event of the year for all sports journalists of the world took place on April 15. It was then that Russian Sports Minister Vitaly Mutko, AIPS President Gianni Merlo and Sochi Mayor Anatoly Pakhomov opened the Congress which was attended by 318 delegates from 108 countries.

In a number of numerous working sessions and discussions, elections of a new membership of the AIPS Executive Committee, in Sochi journalists managed to find some time to take a look at the presentations – a familiar form of interaction between the cities of the future Olympic Games and Universiades, Federations and Organizing Committees of events with the cream of the sports press of the world.

This time there were a few of the International Federations representing their sports, apart from FIAS – they were FILA (United Fighting Arts Federation) and FIFA (International Football Federation). Others just didn’t have such opportunity due to the large number of presentations participants. Judge yourself: candidates to host the 2020 Olympics – Tokyo and Istanbul, the capital of the Summer Universiade – Kazan, II SportAccord World Combat Games Directorate in St. Petersburg, Minsk – the capital of the 2014 Ice Hockey World Championship, the Chinese Nanjing hosting the II Summer Youth Olympic Games in 2014, and Moscow – the capital of the World Championship in Athletics in August.

Among the performances let’s emphasize those presentations that are akin to SAMBO: the Universiade in Kazan and the II SportAccord World Combat Games in St. Petersburg.

Let’s start in chronological order, i.e. from the Universiade in July, the start of which will be less than in a hundred days. Presentation of the Universiade Media Director clarified the figures of the main students start for the last four years. We offer them to your attention. It turned out that the Universiade in Kazan will beat records of student competitions: for the first time in the history of the International University Sports Federation (FISU), the number of athletes representing 170 countries and performing in 27 sports will reach 13 500 people. And according to the preliminary estimates a number of journalists, for whom everything has been done for a successful and comfortable professional activity in Kazan, will be equal to one and a half thousand.

Besides we’ve learnt the updated statistics of the II SportAccord Combat Games in St. Petersburg. In October the northern capital of Russia expects 2000 athletes – martial arts and combat sports fans from over 150 countries around the world. The Games will be broadcasted on TV in 50 countries, and the registration of journalists on the official site of the competitions will begin on May 1.

At the Sochi Congress SAMBO was represented by the FIAS Press Commission Head, AIPS Vice-President Nikolai Dolgopolov, and your humble servant – FIAS Press Officer. Our objective was – to talk about the work done for three years of our cooperation with AIPS, show SAMBO attractiveness for journalists once again and continue working on the formation of the SAMBO Commission in AIPS.

Everything was done, the commission was formed, numerous journalists contacts were received and I’m sure that on the next major SAMBO competitions the number of journalists will increase rapidly. It means that SAMBO will be much more written about, shot and covered in the world. And it will be much easier for us to promote our beloved sport in the world of modern sport movement.

The International Sports Press Association (AIPS) was established in 1924 during the Olympic Games in Paris. At the moment AIPS joins 154 National Sports Journalists Associations. The Italian Gianni Merlo is AIPS Head from 2005. The main projects of AIPS, in addition to coverage of all major events in the sports world, are: the award “Best Athlete of the Year”, the award “Best Opportunities For Press”, and organizing and annual celebration of the “Sports Journalists Day” (July 2).

Natalia Yukhareva
www.sambo.sport
Share
Blog
Recent photos
Latest news
Recent videos
Latest news
Follow latest news You are subscribed!
Thank you! Your confirmation email has been sent to your email.
This website uses cookies to ensure you get the best experience on our website More info Got it!