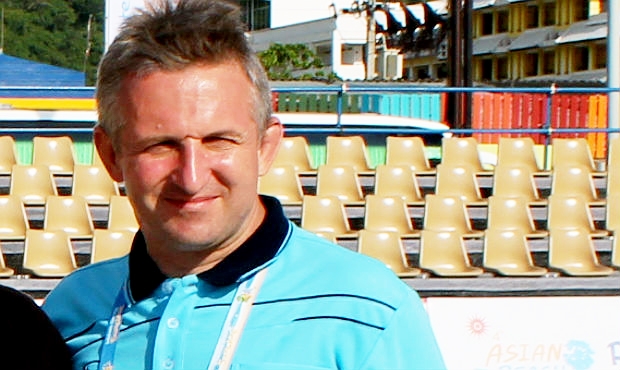 Sergey Tabakov, FIAS Executive Director and technical sambo delegate at Asian Beach Games in Phuket (Thailand), summarized the results of the first Beach Sambo Tournament, rigorously explaining the organization and carrying out of the competition, in his interview to FIAS website. Here are all parts and entire structure for your attention.

Structure of the site

“In the course of tournament there were some suggestions concerning the structure of the site, particularly, to limit the site by clear lines on the sand. However, this will give rise to many questions and discussions as to where a hold is to be made be taken into account, what to do if a sportsman steps over, etc. By simplifying the beach sambo rules, we tried to avoid such nuances as much as possible. Therefore, to my mind, this option with four flags at the corners is the best possible solution.”

Position of the panel of judges

“Perhaps, next time we will have to pay attention to the sun position or to provide all tables with sunshades or tents. We have to do everything to make the display board visible to the judges without narrowing their eyes. It’s not important in a hall; however, the sun position is critical at an open air beach.”

“We carried out an experiment: we allowed holding not only a jacket, but also shorts. No torn jackets, no torn shorts as a result; I believe, everything was alright in this component. The sportsmen’s jackets were white with a styled FIAS logo on the chest. And shorts and flexible protectors for ankle joints (that reminded of sambo boots from afar) were blue and red as in classical sambo. Both sportsmen and fans who followed the competition liked beach sambo uniform.”

“The fact that there were no injuries is satisfying. No injuries at all! This can be explained by short-term fights, on rare occasions the full time, 3 minutes, was required, the majority was finished ahead of time. And secondly, the beach sambo tournament was carried out for the first time; therefore, the sportsmen were extremely focused on the result, which allowed avoiding injuries.”

“The referees admitted that they liked the uniform. It looked good at the referee’s ground and did not take the audience’s attention away from the fights due to its color. The only issue to discuss is the style of a headwear for judges. The referees need a cap (fitted hat) to protect them from the sun and to allow paying all their attention to the combat avoiding sunstroke.

“There were both individual and team classification. This idea was good. Not all national teams were ready to demonstrate high level of team competition. However, team competition semi-finals and finals were incredibly expressive and spectacular. I suppose that the format of team competitions needs to be constantly improved, and appropriate events are to be found in the sports calendar to carry them out. Moreover, there were tournaments with mixed teams, including men and women, which are always especially interesting for the audience.”

“When such countries as Lebanon, Nepal, Syria, and Thailand were among the winners? As for the beach sambo, the gap between the all-time favorites and less experienced sportsmen (which is obvious on the carpet) is definitely reducing. Due to the beach sambo rules, everyone had a chance to get a medal. It was very difficult to predict the result of a fight. Eventually representatives of 12 countries of 15 participants took their medals home.”

“Beach sambo was an experiment to a certain extent. I think it was very successful. There are many other areas for us to develop, e.g. demo-sambo, sambo for people with reduced capabilities, fitness sambo. The competition demonstrated that if we move on at such a pace, sambo will face interesting future.”