Sergey Tabakov, “Sambo athletes will be pleasantly surprised in Baku” 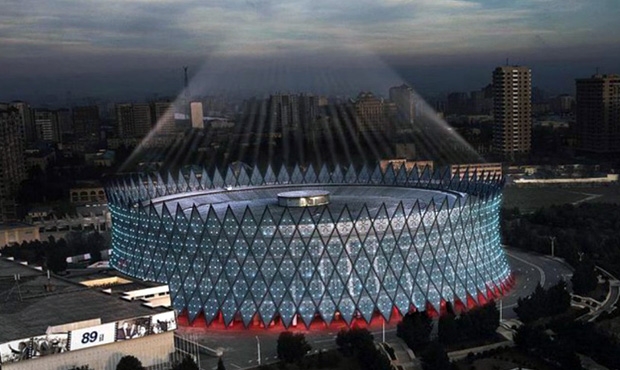 On June 12–28 the first-ever European Games will be held in the capital of Azerbaijan, Baku. Sambo competitions, which were included into the program of this main sports event, would be inscribed in history of our favorite kind of sport on the separate line. FIAS website learned the details of this event from the visitors of the competition. Individual saunas for athletes, airport astonishing with its size, “flying” front of the Palace of Sports — these and other peculiarities of Baku-2015 in our today’s review.

“The first thing that strikes in Baku is an airport wherein international flights arrive. Previously it was domestic airport. It was completely destroyed and made international. The one that previously was an international turned into domestic,” says Executive Director of the International Sambo Federation, FIAS Technical Delegate to the Games, Sergey Tabakov. “I think sambo athletes going to Baku start to get pleasant impressions upon their arrival in the airport. This is a big beautiful building with thoughtout European design that will set holiday spirit for all participants.”

After airport the athletes and coaches will be brought by special transport with Games logos to check in the Olympic Village. By the way, in addition to the standard buses and cars the vehicle park of the Games will include colorful cabs, like London taxi. As for the village where the athletes will reside the experts describe it simply and clearly: “All conditions are the same as at the Olympic Games.” 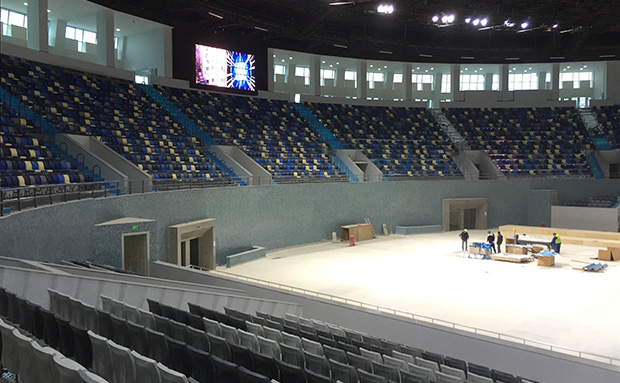 The most important place in all competitions is the hall where they are held. Sambo tournament will be held at the Sports Palace named after Heydar Aliyev on June 22. In the building constructed in 1972 the restoration works are terminated, but it is obvious that it will shine by the target date and create unique atmosphere for the competitions.

“There is a saying among builders: the object goes or does not. Sometimes you work at small building, drudge with it and think when it will be over. And this object is not small, responsibility is big, but everything goes very well: the materials are interesting, the projects are unusual,” shares Rauf Aliyev, Director of the construction company involved in the reconstruction of the Sports Palace. “And it’s not my personal feeling, but the mood of all team. We studied how we could decorate the front of the building, and faced with the fact that there was no additional foundation for its fixation. So we made “flying” front — the original project, which looked awesome. All details were worked out inside of the building. I am sure that everyone who will be in contact with these competitions — from athletes to spectators — will be satisfied. Made with love.” 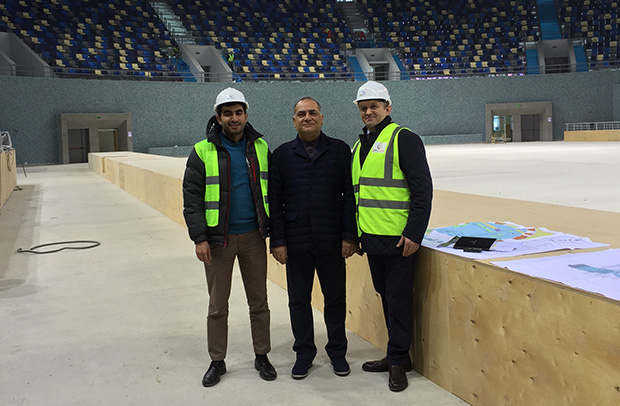 Sports Palace is located in the center of the city, about 7500 spectators can fit in its grand stands, and its arena allows holding the highest level competitions. There are all conditions not only for brilliant performances of sambo athletes, but for comfortable preparation. There are separate changing rooms for each team, 6 sambo mats in the warm-up hall, a lot of tiny individual saunas (each is for one person), huge hall for weighing and many other auxiliary rooms, including specially equipped room for the doping control. The athletes travel over a distance from the Games Village to the Sports Palace of about 15–20 minutes. First of all, the arena will be tested by the wrestlers, after a few days break sambo athletes will compete there and then it will be judo athletes turn. 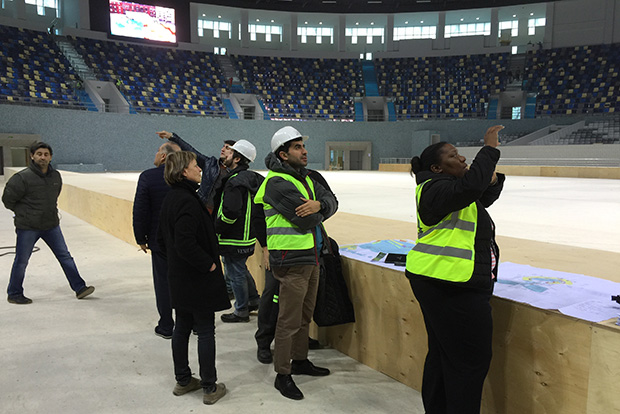 “I think that in Baku sambo athletes will be pleasantly surprised not only with their participation in the significant event, but with its organization level and place where it will be held. I think our athletes have never seen something like that. It is Olympic Games format,” says Sergey Tabakov.

The Games will start in less than four months, and the work in Baku-2015 is humming. European Games Directorate Office occupies 7-floor building. Everything is in a typical European style inside the building. The huge hall is with workplaces, separated by partitions, more than half of the employees are foreigners from different countries of Europe and of the world. There are a lot of people who worked in the Olympic Sochi-2014 and in the capital of the summer Universiade-2013 in Kazan.

“Organizers say that sambo is loved in Azerbaijan, so the grand stands during the Games surely will be filled. Additionally, Dagestan is near, where sambo is also very popular, and in Baku it is expected that many spectators would come from there,” says Sergey Tabakov. “Everyone lives with the Games in the city and aware of the seriousness of the upcoming event. I come to Baku with certain regularity, and the city dynamics in notable — it becomes European city. It is pleasant to note that after the European Games in Baku so well-developed sports facilities will stay — the capital of Azerbaijan will be ready to hold almost any large competition.”