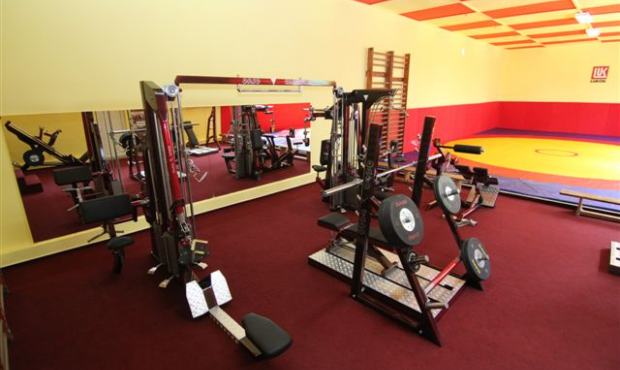 Romanian Ploie?ti has recently become a part of history as a city where the third specialised SAMBO gym in this country was built. It is pleasant to know that this historical fact is closely connected to the natural peculiarity of the region, to be more exact: the largest oil reserves in Romania are situated in Ploie?ti. It was an oil company that provided financial support for renovations of the premises and installation of the new sports equipment in the gym. The opening of the new gyms is near at hand, which is evident from the partnership agreement that has been signed between Lukoil Corporation and Romanian SAMBO Federation.

One can see the gym in the photos from the place. We have learnt detailed information about facilities the gym provides to the athletes from the Romanian Federation. Besides their own gym, sambo athletes also received separate shower rooms, restrooms and locker rooms. There is a sauna, ventilation system, glass units and other facilities in the gym. In its turn, Romanian SAMBO Federation provided Petrolul Sport Club with a SAMBO mat and SAMBO uniform.

The Grand opening of the gym has become a great event not only to SAMBO community, but to the whole sports community of Romania, as well as to Ploie?ti with its population of almost 200 thousand people. Ioan Dobrescu, Secretary General of the Romanian Olympic Committee, Andrey Bogdanov, Director General of Petrotel-Lukoil OJSC, Alina Instratescu, representative of the Ploie?ti Mayor's office, Viorel Gyske, President of Romanian SAMBO Federation, Eduard Kryngashu, Head of Petrolul sport club, as well as coaches, athletes and parents of young sambo athletes were present at the Grand Opening of the SAMBO gym.

However, not only those present at the event could see the new gym. Thanks to the broadcasts of Dolce Sport and TV Prahova, as well as to the presence of many journalists this event had heavy coverage in the Romanian mass media.

According to Viorel Gyske, President of Romanian SAMBO Federation, two more special sambo gyms are going to be opened until the end of this year.

– Interest to SAMBO in Romania has increased lately, - says Viorel Gyske. –This year there has been the first graduation of SAMBO coaches from the national coaches school. Applications for next year are accepted on competitive basis right now. It only goes to show that we have chosen the right way for SAMBO development in Romania. I wish further development and popularisation of SAMBO, as well as high results at the world and European sports arenas to athletes and coaches.