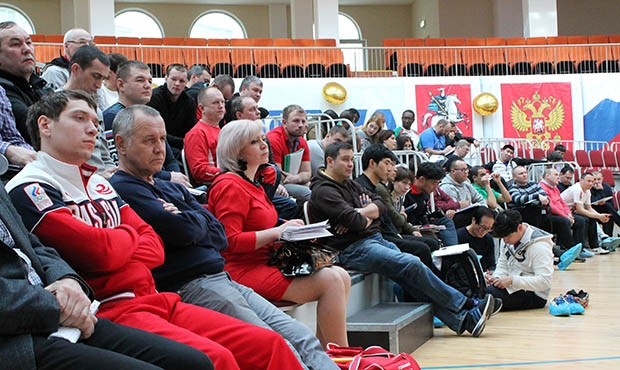 Nearly 50 referees from different continents arrived in Moscow for the International SAMBO Seminar for Referees, which started on March 22 at the famous SAMBO 70 school. The FIAS website visited the seminar to learn the opinions of the participants and instructors.

Being a SAMBO referee is one of the most controversial occupations. In any dispute, there will someone who is happy with the referee's decision and someone who will be totally against it. Referees are usually blamed for defeats, regardless of whether these accusations are true or not. When a referee works well in competitions, he rarely receives much praise, but if he makes a mistake, everyone hears about it.

It was specifically to prevent mistakes in their work that referees from around the world came to the international seminar in Moscow, where they studied complex situations for refereeing. Even on the first day, a lot of participants said the set of videos chosen for analyzing the fights was really hard, and it wasn't easy to make the right decision. But the famous saying of a celebrated military leader is apt here: "Train hard, and the fighting is easy!".

Referees from Korea gathered around an interpreter and listened carefully to her: for two days, she became their ears and carefully translated what the Russian referee instructors leading the seminar were saying. At the same time, the Koreans were taking photos and videos of what was going on using gadgets manufactured in abundance in their country. The interpreter faced a real challenge: you have to work hard to adapt the names of methods and other technical actions from Russian to Korean. She was trying. 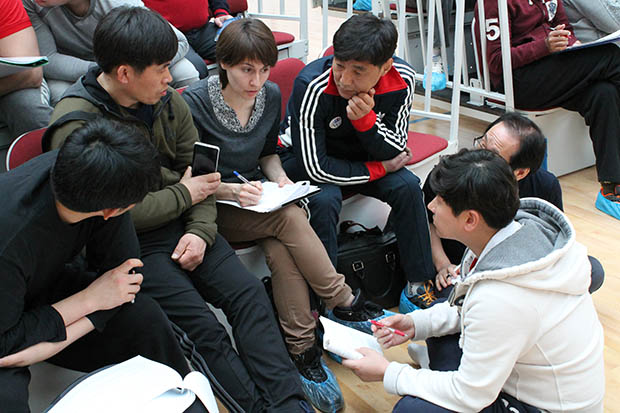 "The language barrier is the only problem during training. But this problem was overcome through the efforts of our interpreter," says Korean referee Sang Jo Han. "This is my first international SAMBO seminar for referees. I came to SAMBO 12 years ago, and immediately took up refereeing. I traveled to Moscow to study the finer points of the work and to learn about all the changes in the SAMBO refereeing rules. I did a lot of preparation before the seminar: I watched videos and studied the work of referees and reviewed situations from various competitions. I hope it will help me pass the exam successfully. After the seminar and the World Cup events, I would like to visit Red Square and the Mausoleum." 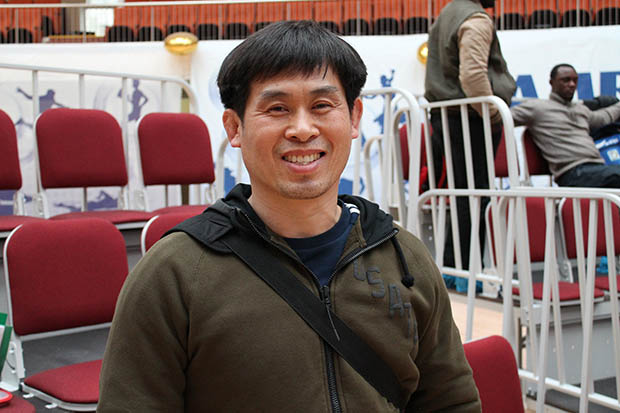 SAMBO's role in increasing tourist traffic to the Russian capital was highlighted by one of the seminar facilitators, Boris Sova, Chairman of the Referees Commission of the All-Russian SAMBO Federation (RSF).

"It's encouraging that the geography of participants in international referee seminars is expanding year by year. Today we have representatives from Algeria, Cameroon, South Korea, the United States, and a huge number of referees from the CIS. We've managed to gather a large number of Russian referees, and new people have also joined the referee corps. I think this is why the geography of professional referees has expanded. I'm also very pleased that a lot of young referees have joined us here. This means that a change of generations among referees is gradually taking place (there has been a lot of talk about this in recent years). I think this is one of the achievements of this seminar." 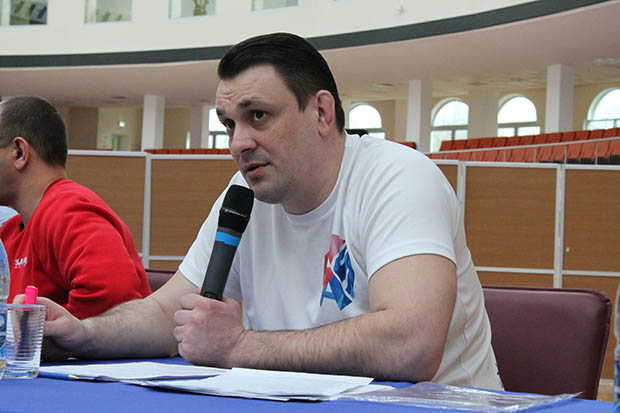 The prospects are really encouraging, but now let's return to the present from the bright future. We took this opportunity to ask Boris Sova what he thought about the refereeing at the recent Russian championship.

"Of course, I think there were mistakes. But we shouldn't forget how hard we worked: in three days of competitions, we worked 31 hours. It's no wonder that under such a load the referees made mistakes, but thanks to the video reviews, we were able to undo the mistakes that were made. I think the champions and winners were eventually identified correctly. There were mistakes, but I didn't see any deliberate bias," Sova said. 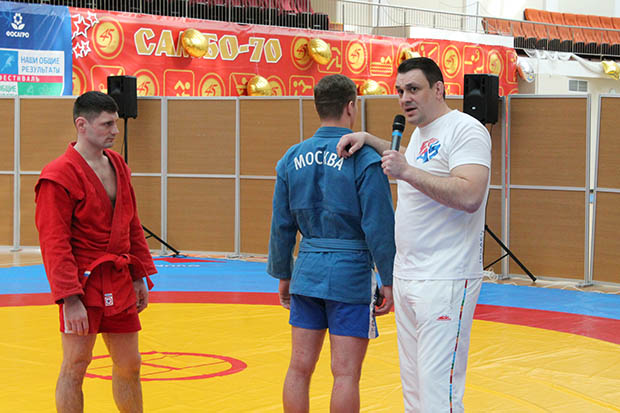 From Russian affairs, we turned to international affairs. We broadcast the remarks of the seminar's Korean participants about the language barrier during training.

"As with other sports, we need a universal language that everyone can understand," Sova says. "The founders of judo were Japanese, so obviously all techniques and combinations have Japanese names, although communication is mainly in English. I think an international SAMBO referee must at least have knowledge of English. But as the founders of the sport, we have the moral right to ensure that foreigners studying SAMBO knew the turns and names of holds in Russian."

Kuntskeri Takunbaev, a participant from Kazakhstan, had no problems with language at the seminar, but noted that the event program was more complex compared to the previous year. This was especially true of the set of videos from past events where referees had to judge the actions of the athletes on the mat. 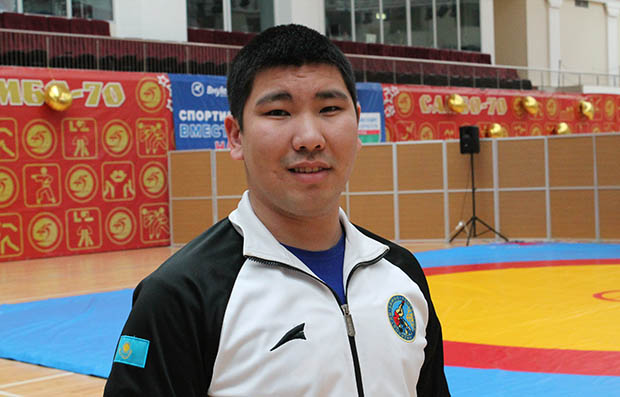 "I also attended the international seminar in Moscow last year. Then I was able to successfully pass the exam and receive a certificate. Now, of course, I feel more confident than the first time, but I'm well aware that the level of requirements for SAMBO referees is always increasing," Takunbaev says. "The thing about being a referee is that there are always people who are unhappy with your performance. We're all human, and we can make mistakes. After a fight, you start to analyze your actions and realize that at some point you could have made another decision. That's why practice and constant self-improvement are so important."

One of the most regular participants at international referee seminars is François Nama from Cameroon. A country that only recently discovered SAMBO has achieved notable results in international competitions, which includes winning medals at world championships. Cameroonian referees, like the athletes, are also constantly improving.

"We often come, and we try not to miss any opportunity take part in these seminars, because we're well aware of the importance of these events," says Nama. "It's very important for us in Cameroon to form a good, self-sufficient referee corps. This is our main goal. After training at the international seminar, we will then be able to hold national seminars in Cameroon to pass on our experience and knowledge. As a result, a group of referees able to judge both nationally and internationally should form in our country. 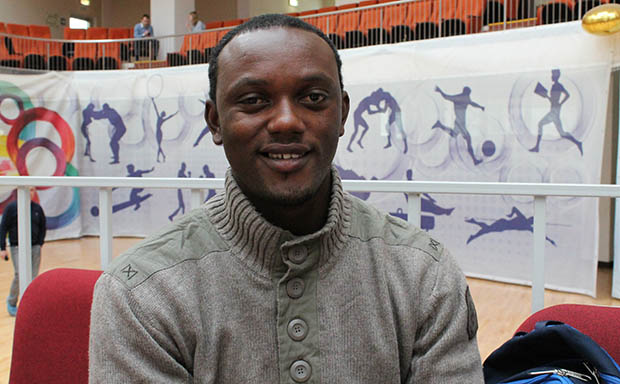 "Its purpose was to train local referees according to the changes made in the rules last year. Our plans for this year include holding a similar seminar, most likely in late April. We will also hold separate training for athletes, where we can tell them about all the changes that have been made in the rules," Nama says. "Right after the seminar in Moscow, we'll be going to the A. Kharlampiev Memorial World Cup, where sambists from our country will also compete. Every time we enter a competition, we expect to do better than last time. Last year at this tournament we won a bronze medal, and in this one, we want our sambists to compete for a higher award."

"Until the last minute, I hoped there would be someone else from our continent, and I was even a bit nervous about this on the day I arrived in Moscow. But in the end I realized that it didn't matter, and now it doesn't bother me at all. Especially because I have a first-rate interpreter working with me. Unfortunately, I don't speak Russian, but the more I get involved in SAMBO, the more I realize I have to learn this language," De Rose said.

The American referee said this was not his first seminar, so he felt a lot more confident than before. An experienced referee, De Rose also talked about whether he got enough practice at the national level in the U.S. 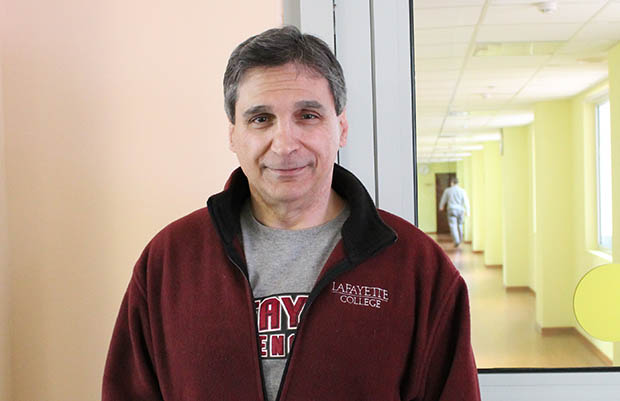 "You may be surprised, but I'm getting more and more. Every year, I work as a referee at 3 or 4 SAMBO tournaments in the U.S. Today, I'm really seeing a rise in SAMBO in the United States. This is mainly because people come to SAMBO from other martial arts, like judo, jujitsu and others. Most of them don't leave their sports completely; they start training in SAMBO along with them. I've also noticed that the level of sambists in the U.S. has really improved. Of course not all of them are ready to compete at the international level, but their progress is obvious," De Rose said.

Finally, we asked the American referee whether he would be working at the A. Kharlampiev Memorial World Cup, which starts in a few days at the Druzhba Multipurpose Arena in Moscow. De Rose answered:

"The referee leadership will decide everything. I'll be very happy if they trust me as a referee at such an important international tournament. But even if they have me checking the athletes' uniforms before the fights, I'll do this to the best of my ability, because it's important work too."

The international seminar for referees runs from March 22 to 24. The first two days will be dedicated to studying theory and analyzing complex situations, and the exam will be held on the last day. Referees who successfully pass it will receive a certificate and the right to work at international tournaments. Their first international competition may be the A. Kharlampiev Memorial World Cup, which will take place in Moscow on March 25 and 26. You can watch a live broadcast of the tournament on the FIAS website.

[Photogallery] International SAMBO seminar for referees in Moscow
Share
Blog
Recent photos
Latest news
Recent videos
Latest news
Follow latest news You are subscribed!
Thank you! Your confirmation email has been sent to your email.
This website uses cookies to ensure you get the best experience on our website More info Got it!