My coach told to me: “Get ready, you know how to win!” 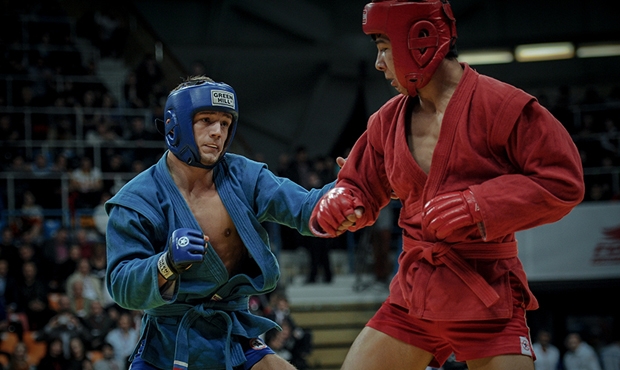 On March 27 there was the first day of the Sambo World Cup Stage “Anatoly Kharlampiev Memorial” held  in the Druzhba Sports Arena of the Luzhniki Olympic Complex in Moscow. The FIAS web-site has collected opinions, emotions and impressions of the participants and now wants to share them with you.

The Russian athlete Elena Bondareva won her first final in the under 48 kg weight category in 48 seconds. Some spectators didn’t even manage to take their sits in the Druzba Sports Arena when the judge victoriously raised her arm. 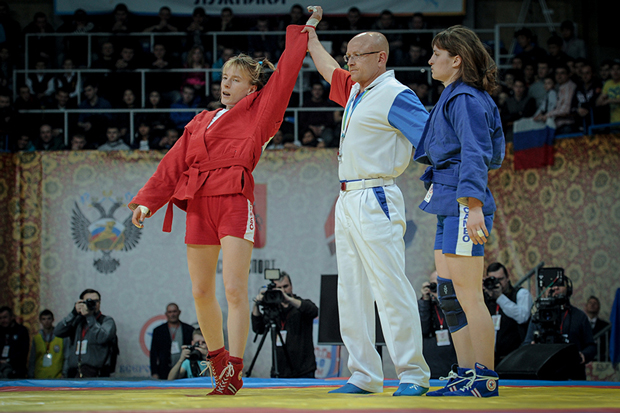 “Everything looks very easy during the competition but in fact there’s a hard work behind it,” said Elena during her interview to the FIAS web-site. “We trained at the Sambo 70 School while preparing for this World Cup. Since we prepared quite well and avoided sleepless nights before the competition, the fightings went without a hitch. This year I was only the third in the Russian Sambo Championship, consequently the World Cup became a good opportunity to demonstrate my strength. I’m very glad that I won the tournament in Moscow. Am I tired of the Anti-Doping Committee attention? Absolutely not. After the World Championship I had been supervised for 2 years: there was a diary registering everything including time and places I went to. Several time they visited me at home. This is the evidence that sambo reaches a new height and I hope it will enter the Olympic family soon.”

The Kazakh sambo wrestler Beimbet Kanzhanov (52 kg) became a winner of the Sambo World Cup Stage “Anatoly Kharlampiev Memorial” for  the second time in a row, and was very happy to the max. 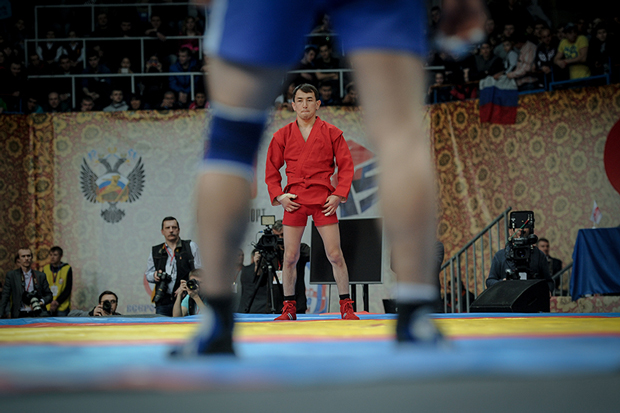 “I can say it is my favorite tournament, not least because it is one of the most reputable tournaments. I won’t be satisfied with what I’ve already achieved. This year we’ll have the World Championship – the main tournament of the season. I have already been qualified for our national team and I will try to win medals in Morocco. And of course I would like to come back to Moscow in a year to win the World Cup again.”

Kota Yamamoto, the Japanese wrestler, had contradictory feelings after capturing bronze in the same weight category. 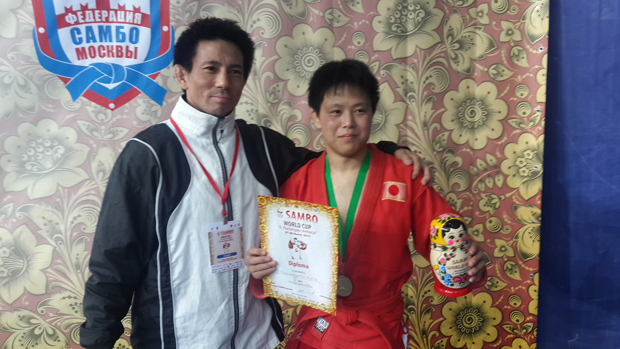 “I can’t say that I’m satisfied with my result but this bronze medal is my first prize gained during the international sambo tournament,” Kota Yamamoto shared emotions. “I have practiced sambo for 3 years already, I participated in three world Championships and the Sambo World Cup Stage “Anatoly Kharlampiev  Memorial,” however, I didn’t win then. I exercised a lot and finally I managed to succeed. This June we will have a qualification for the Sambo World Championship. I hope I will be qualified and will go to wrestle in Morocco.”

Novruz Atayev (52 kg), the gold winner of the combat sambo competition from Turkmenistan, told us that the recipe for success was his good preparation and readiness to compete in the final. 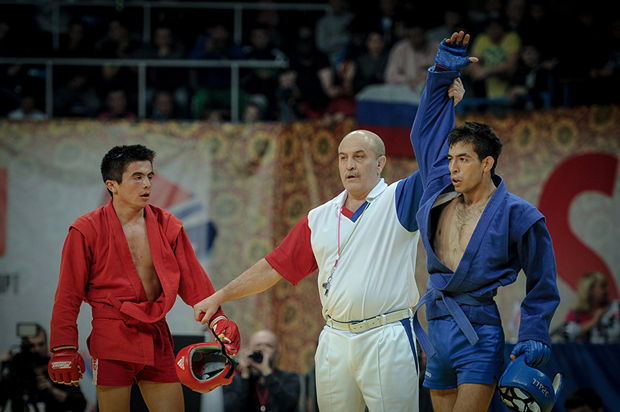 “I’ve already met this competitor in the Sambo World Cup Stage in Kazakhstan. And I had a special training to fight against him. I’m very glad I managed to complete all my plans and win, as the Anatoly Kharlampiev Memorial  is one of the most significant sambo competitions in the world”, declared Novruz Atayev.

The Belorussian sambo wrestler Ekaterina Prokopenko (60 kg) told the FIAS web-site before the tournament that she expected a high competition in the tournament. 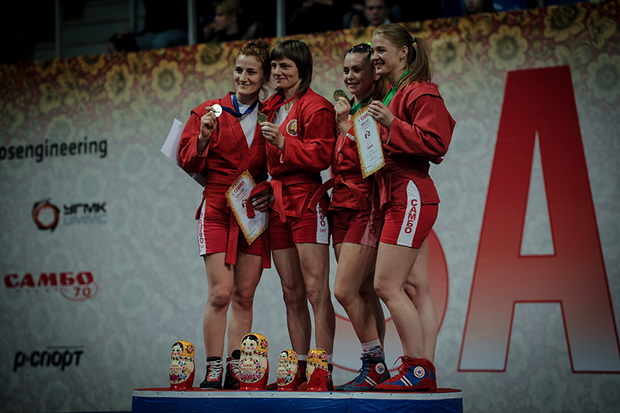 “Honestly I expected more serious competitors in my weight category. However, the combat can’t be easy; I’ve said it hundreds of times. You should prepare yourself for each rival. Every combat is difficult, and everything depends on the athlete’s mental approach. I’m trying to stay focused before every tournament. Sometimes some life problems knock me down and prevent me from concentrating. But if you really want something, you have to force yourself. In the final my rival and I wrestled for getting into the final in Kazakhstan. The Georgian athletes are strong competitors, especially physically. I had a plan for the fighting to enter upon the mat and make the right throws. I managed to do this.”

The Romanian sambo athlete Daniela Hondu is famous for her performance in the weight category of up to 56 kg. However, starting from this year, she transferred to “heavier” weight category – 60 kg aiming to participate in the First European Games in Baku.

“It is more difficult for me to stay in this weightier category. But I feel good, and I’m preparing for the European Games. Physically and emotionally I don’t feel much difference in my new weight, but the fact that all my rivals are new for me and I’ve never fought with anybody of them before is really difficult. I’m only 10% satisfied with my today’s result. I haven’t managed to carry out all the plans of my coach,” said Daniela in her interview to the FIAS web-site. 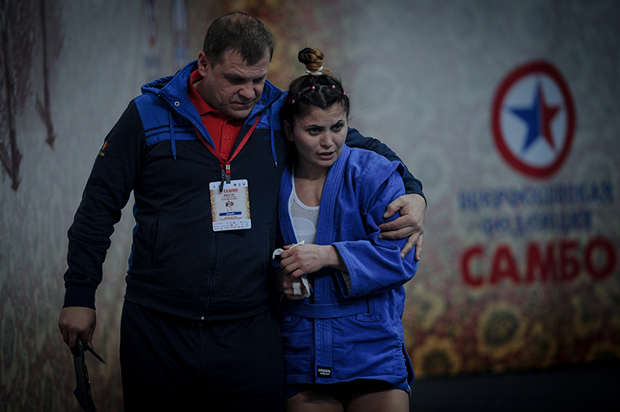 Viorel Gyske, the President of the Romanian Sambo Federation and the coach, comments on the performance of his trainee.

“We have a plan from January to June in Baku, we change nothing in it. All the previous tournaments including this World Cup and the future European Championship are test competitions and training tournaments for the European Games. Despite the competition practice, every day we have workouts and training camps. For the Games in Baku we set the only possible goal – to win the gold medal.”

The loyalty to the chosen tactics  allowed Eugeniy Sukhomlinov (68 kg) to win the final fighting. 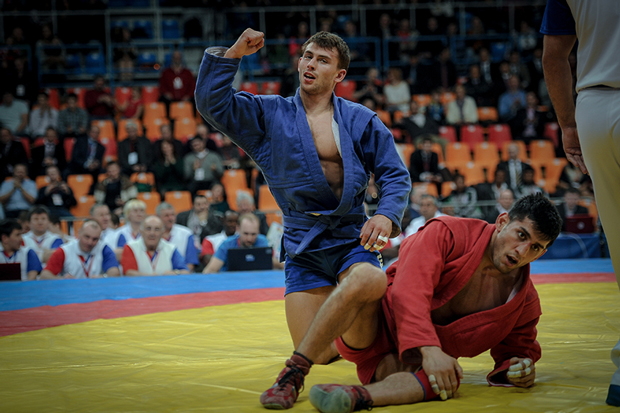 “The combat was very difficult, and I want to thank fans who supported me,” said Eugeniy Sukhomlinov. “It helped me to win the combat. In the beginning I scored 1 point and then acted according to my tactics. I didn’t want to allow the competitor to grip, to attack and to make me wrestle in his manner. I’m glad that I participated here for the first time and won at once. My competitor – Emil Gasanov – is a very good, strong guy, he is perfectly prepared for the fighting. He is a worthy opponent. After his semi-final my coach and I analyzed his wrestling, prepared well and beat him tactically, and this really helped me.”

Yong Joon Jeon from Korea gained the “silver” in the weight category up to 90 kg in combat sambo contest. Just after the prize-giving ceremony the Korean TV Company KBS journalists surrounded the medal winner. They came to Moscow to shoot a news item on the Sambo World Cup Stage “Anatoly Kharlampiev Memorial”. 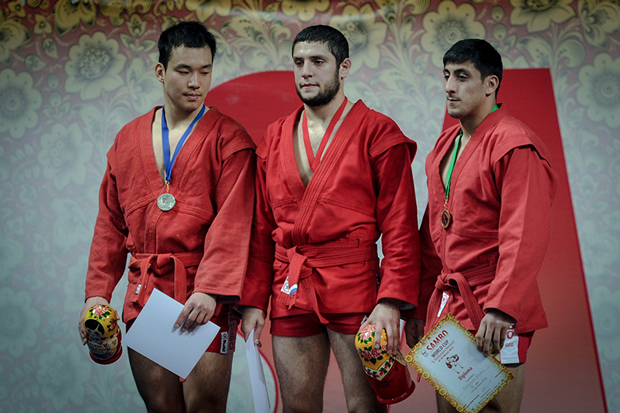 “I’m very content to win a silver medal in such a large-scale competition with a long history. I want to thank the Korean Sambo Federation for the support. I think today I’ve honorably represented our country in Russia. Honestly, while going to Moscow I didn’t even think of winning the medal. Now I feel confident, and next time I will try harder to win the gold one,” told us Yong Joon Jeon. “I planned to use more blasting techniques; however, unfortunately I couldn’t bring my plan to life. Before every fighting I feel excited that I can demonstrate my skills in front of the spectators. Now sambo has became very popular in my country , and many people are interested in this kind of sport. When I say that I go in for sambo in Korea, I’m pleased with people’s positive reaction.”

Vadim Shagin, the combat sambo gold winner in the weight category of up 68 kg, emphasized that the main thing for the athlete is to be morally ready for the fighting. 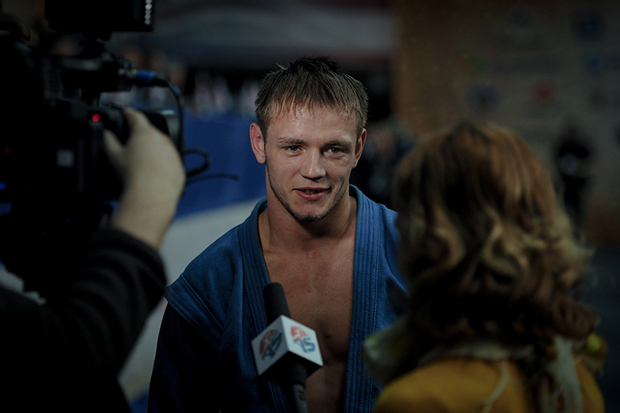 “Before the fighting my coach said, “Get ready, you know how to win”. I warmed up, set up my own plan for the fighting and carried out all I planned. Morally it is very difficult  to start every fighting; it’s difficult to psychologically overcome yourself. To be punched in the face is dreadful and painful. From outside it could seem I got an easy victory, but actually I trained a lot to decently participate in this competition,” Vadim said. “I hope next year you could see me in the World Sambo Championship. At the last Russian Sambo Championship I won the semi-final fighting, and I felt I could do more. I wanted to end my combat more vividly. As a result, I was mistaken, the rival got ahead for a split second and I fell down. I lacked time to correct the situation. I suppose, the victory with the 8 point advantage according to the new rules is more spectacular for the audience. Every athlete tries to put out his strength in order to finish the combat; this is the reason why combats become more vivid and dynamic.”