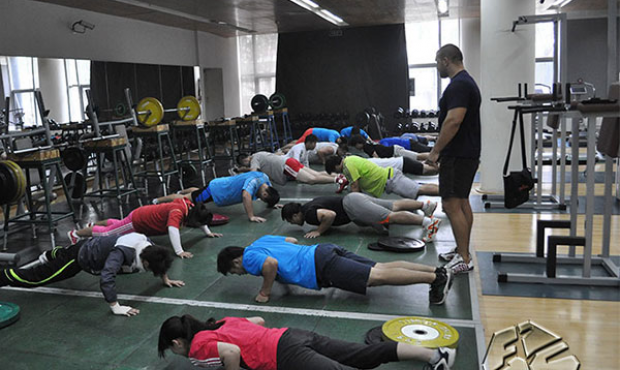 In different sports in different ways they solve the problem of joint training camps aimed, on the one hand at the growth of athletes’ sports skills, and on the other – at the development and promotion of a sport in the world. For example, in our sister sport – judo there are traditions in the form of a training camps after a series of Grand Slam and the Continental Cup tournaments established over the years. The European Judo Union project in the form of a series of international camps for athletes with a bright name «Going for Gold» is also interesting.

Unwishing to “reinvent the wheel” and having examined the experience gained on this subject in the world of modern sports, we asked ourselves: “And in what way will SAMBO develop?"

We contacted Sergey Tabakov, the International SAMBO Federation Executive Director with this question. He says: “This issue is currently being actively debated by Sports Department and the FIAS Development Department. To introduce this kind of practice in SAMBO – is our challenge for the next year or two.

We are planning to attach this kind of training camps on the model of judo to 4 stages of the World Cup. These are the following cities – organizers of the World Cup: Uralsk (Kazakhstan), Moscow (Russia), Caracas (Venezuela) and Casablanca (Morocco). We would like to organize training camps, lasting 3 – 5 days after each of the stages. But if judo directionality of the majority of such projects is training, we see that the modern SAMBO has a slightly different way. This project will be not only training, but in many respects the educational one. Let me explain what I mean. If a high-class judo athletes “have a registration” of many countries of the world, in SAMBO we face a situation of dominant Russian SAMBO School and CIS countries. Therefore, our task – is to raise the level of athletes from other countries, try to reduce the difference in class athletes, which we observe today. And in parallel we should include an educational program for coaches to this project. That’s how we see it and we will run for it”.

Another interesting question of organizing such international sports camps. In judo, already mentioned earlier, training camps are held, for example, in Tokyo Kodokan or Paris Institute of Judo. In Russia – it is a recently rebuilt Judo Academy in Zvenigorod, in Belarus – Staiki Olympic Sports Complex.

And in this regard we have one more question to Sergei: “Are there similar bases in the world of SAMBO?”

And the word goes back to the FIAS Executive Director: “Let us consider this question in two planes. If we talk about training camps following the World Cups, there are certainly bases of the proper level in these countries – with the necessary infrastructure and competent personnel. Give us a year, and in 2014 we will try to implement our plan into action.

But there is another layer –continental SAMBO centres. These are the points on the map of the continental SAMBO, which could be attended by athletes and coaches in their region to prepare better for the main starts of the season. In this direction, we are now trying to find centres that would be optimal from many sides, beginning from just a geographical convenience, and finishing the level of service provided and the equipment available.

During the European Championship among Youth we inspected the base in Limassol, studied in details similar centres in Casablanca, where the FIAS Sports Department carried out seminars for coaches and athletes. In the very near future we will be able to learn more about SAMBO base in Tokyo where in mid-May seminars for Japanese SAMBO athletes and coaches will be carried out.

I think that next year we will conduct an inspection of SAMBO centres most suitable for this role and then we will be able to mark points of Continental SAMBO centres on the map of the modern SAMBO. At a recent meeting of Vladimir Putin, the President of Russia, with representatives of the World SAMBO, Sergei Sobyanin Moscow Mayor said that in August 2013 on the territory of the Luzhniki Moscow Olympic Complex the first stone of the future International Centre of SAMBO Development will be put. I am confident that the Moscow center, along with other continental centres will provide SAMBO with necessary energy and give an additional impetus to the development of our sport”.