Trinidad and Tobago in the SAMBO family 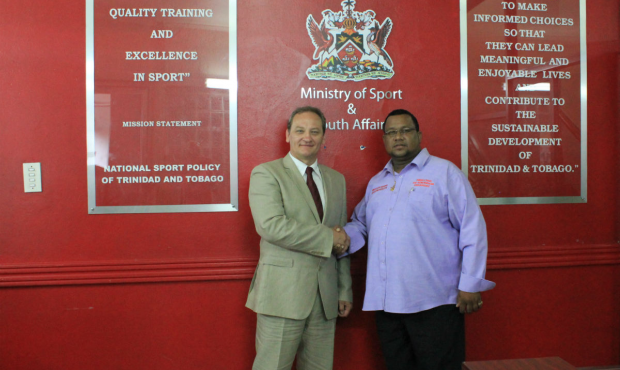 The increase in the number of National SAMBO Federations in the world is a tricky issue. This is both the IOC’s condition for including new Federations into the Olympic family and the call of the times, plus the desire of the whole SAMBO family to become bigger, which means stronger at the same time.

In this connection the news that has come today to the FIAS office in Moscow can be called nothing but pleasant. SAMBO is now acknowledged by the Ministry of Sports of one more country – Trinidad and Tobago.

The Republic of Trinidad and Tobago is an archipelagic state in the southern Caribbean, lying just off the coast of Venezuela. It consists of two main islands, Trinidad and Tobago, and numerous smaller landforms. Till 1962 the country was a British colony; since it obtained independency, the country has been a member of the Commonwealth of Nations.

During the whole period of performing in the Olympics, the country’s athletes have won 14 olympic medals including 1 Gold medal, 5 Silver and 8 Bronze ones. All the medals have been gained in the competitions in track-and-field events, swimming and weight-lifting.

In a short time probably we will see SAMBO in that list, provided that it becomes an Olympic event. Still and all, the first step - the acknowledgement of the country’s National SAMBO Federation – has already been made.

The key role in that decision belongs to the SAMBO Association of the British Commonwealth and personally to the President of the latter, Lord Simon Reading. His influence and authority promoted quicker acknowledgement of SAMBO in Trinidad and Tobago. At another point, the fact that SAMBO is not only the kind of sport but a modern system of youth’s education and development, also contributed to friendly disposition in relation to SAMBO in that new country.

Despite just a few months that newly-acknowledged SAMBO Federation of Trinidad and Tobago has existed, it sets pretty ambitious goals. The programme of SAMBO development has been discussed during the visit of Andrey Moshanov, Head of FIAS Development Department, to Trinidad and Tobago. The future work to the benefit of SAMBO has been approved by the management of the country’s Ministry of Sports and local NOC.

The team of Trinidad and Tobago will participate in the Pan-American Championship, which will be launched in a few days and bring over 130 participants together from the Americas.

7 athletes will represent the SAMBO team of Trinidad and Tobago – some of them actively promote SAMBO in the country’s national defense forces, while the other part of the team includes students from the University of the West Indies. Participation in Cali will be like an exam for them before performing in the coming 2013 World Universiade in Kazan.

Within a year SAMBO shall also be introduced in elementary and high schools; the instruction will start with the FIAS base programme “How to Fall Safely”.

Moreover, SAMBO will be taught in mixed martial arts clubs, 6 of which are ready to provide their sporting halls for holding SAMBO classes right now.

As early as in March 2013 it is planned to hold the first National SAMBO Championship of Trinidad and Tobago. Based on performance results, the team for participation in 2013 SAMBO World Championship will be established.

Therefore, it’s safe to say that people in ultramarine and scarlet SAMBO uniform are now rendering habitable the islands of the Caribbean. Well, in the very near future, they will get used to this uniform, and it is going to bring health and good state of mind.