SAMBO Tournament at the Universiade in Kazan: the first medal winners are already known 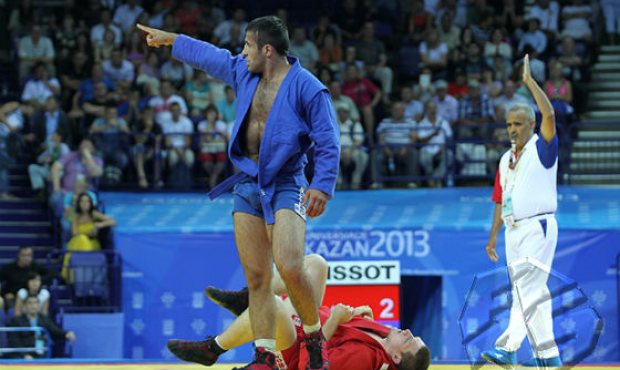 Today, on July 14, 2013, at 10 am a historical event took place at Tatneft Arena. This is the place where SAMBO tournament included into the XXVII Universiade Programme started for the first time throughout the timeline of the International Student Games. On the first day of the tournament about 150 sambo athletes from different parts of the world began to fight for the medals of the Student Games. The champions in 6 weight categories (3 for men, 3 for women) will be determined in the evening part of the programme. According to the results of the preliminaries and repechages, the first SAMBO bronze winners in the history of the Universiade became known.

The team from Azerbaijan had the best luck in winning bronze medals: they already have two medals in their collection. Azerbaijanian sportsman in the category of up to 52 kg Agasif Samadov drew excitement and applause of the bleachers. His ‘bull’ and a back throw over the back went for 4 points in total and then Samadov fooled his competitor from Turkmenistan Rustam Ismailov. Having shown that he was going to attack him with his ‘bull’, he did a wonderful side undercut in the step pace when moving counter his opponent and he remained in the stand. As a result, he had a flawless victory, the audience was thrilled and SAMBO athlete from Turkmenistan Ismailov had tears in his eyes.

Sportsman from Uzbekistan Sugrob Ostonaev, in the weight category up to 90 kg, thrilled the audience when wrestling in the small finals. At first Sugrob earned 2 points in his fight for the bronze medal with a Frenchman Jourdain for an amplitude throw ‘mill’ that was uncontrolled at the end and then he left no chances to the Frenchman by having performed precise and effective submission lock on the knee.

We can’t but mention the bronze medal of the Serbians that was won by Nicola Miloshevich for his team. When losing by one point to his opponent from Japan Ueharu Shigiuki he performed a great amplitude undercut with a fall for 4 points 1 minute before the end of the fight, which helped him to become the third in the final table in the weight category up to 90 kg.

Emil Khasanov from Azerbaijan performed the second clean throw of the day during the small finals. He performed the throw by grabbing the leg and remaining in the stand at the same time. Thus, he didn’t let the sportsman from Korea Yung Minsuk in the weight category up to 68 kg to get the bronze medal.

So in the evening the following athletes will get ready to step onto the third step of the medal stand:

Very soon at 3:50 pm FIAS website will begin broadcasting of the evening part of the programme. The first winners of SAMBO gold in the Universiade Programme will be known after 6 finals. The finals will be between: