Representatives of the Asian SAMBO movement met at the conference hall of Corinthia Hotel on the eve of the FIAS Congress, which starts in St Petersburg (Russia) tomorrow. The schism in the SAMBO world that recently took place on this continent is now gone forever as of 4 October. Representatives of 17 national SAMBO federations of Asia met in Russia’s northern capital to reunite and become a single whole. For more on this, see our report from St Petersburg.

This day will go down in the “SAMBO chronicles” of Asia as a day of reunion and reunification: the representatives of 17 national federations of Asia held a roundtable today and decided to consolidate their forces for the sake of developing and promoting SAMBO both in Asia and around the world. 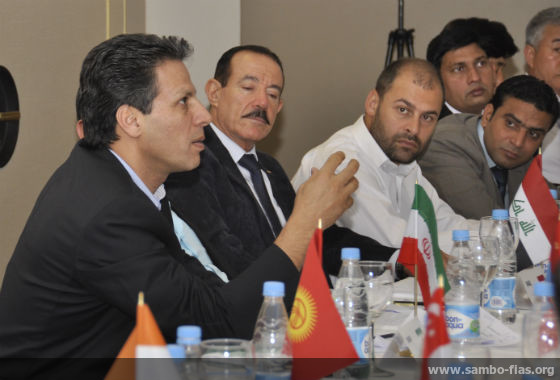 Alamzhon Mullayev knows our sport first-hand. He is a Master of Sports in SAMBO and his track record includes managing the Taekwondo Federation of Uzbekistan. He is currently deputy general secretary of the Eastern Martial Arts Development Centre in Uzbekistan. This organisation unites 27 martial arts federations around the Republic of Uzbekistan. It is no coincidence that at a time when Asian SAMBO needs consolidation its leader is a person who knows a lot about unification work.

“Sure, the experience from the Centre’s work in our country will certainly be useful to me. We have established a very strong, working and functional relationship within the organisation, which is working to unite the country’s efforts to promote martial arts. I am sure that the main goal for Asian SAMBO now is specifically to consolidate everyone who loves, knows and works for SAMBO on the continent. There is very serious work ahead: we need to expand the geography, establish new federations and organise the work of the newly created union in accordance with the requirements of the global sports movement.

“A great deal of work awaits us in matters of cooperation with the Olympic Council of Asia (OCA). In this regard we face very serious work, but the result may be significant – SAMBO should join the programme for the Asian Games and the Asian Indoor Games. Of course, this requires the establishment of relations between federations and an improvement in the level of Asian SAMBO competitions. I am happy for the trust shown in me today by the leaders of Asian SAMBO and am confident that we can solve all the problems facing us,” Asian SAMBO Union President Alamzhon Mullayev said in comments on his election.

“Since ancient times, fighting has been a sport based on the idea of unification. Fighters have always been united – this is how it has been historically. And I am sure that we SAMBO fighters can only become stronger by uniting and, as a result, reach the greatest heights and realise the Olympic dreams,” FIAS President Vasily Shestakov said in comments on today’s meeting of the Asian SAMBO representatives.

The Asian SAMBO Union was founded, its leaders were selected, and its sports calendar was approved at the meeting. Very soon – within three months – the SAMBO World Cup stage “For the Prize of Republic of Kazakhstan President N. Nazarbayev” will open the 2014 competitive season for SAMBO fighters from around the world. The continental SAMBO championship in Asia will be held in early June in Mongolia’s Ulan Bator. The Asian SAMBO Union calendar also includes an international tournament in the memory of internationalist soldier V. Gordeyev (Bishkek, Kyrgyzstan) in February and an international tournament in the memory of former world champion S. Rakhimov (Dushanbe, Tajikistan) in September.