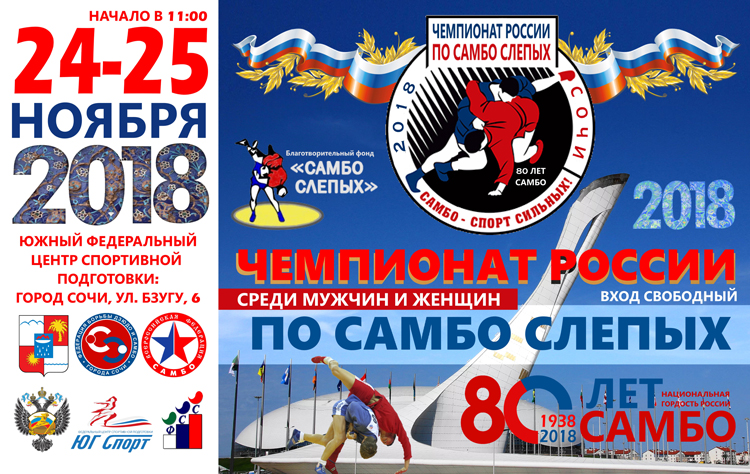 Russian SAMBO Championships among the Blind and Visually Impaired will take place on November 24-25 in Sochi. Approximately 100 sambists from 32 regions of the country are going to take part in the tournament that will be held at the "Yug Sport" Federal Center of Martial Arts. Medals will be awarded in 9 weight categories among men and 9 among women.

'The competition rules in this SAMBO discipline practically haven't undergone any adaptation for the blind, which shows the democratic nature and accessibility of SAMBO for everyone. The combat technique is based on tactile and auditory sensations. However, despite the challenges of sight, athletes demonstrate a high level of skills, since vision loss is not an obstacle to using the rich variety of SAMBO techniques to the full,' noted the organizer of the Championships, a member of the FIAS Commission for Athletes with different abilities Roman Novikov.

The following year, the first Open SAMBO Tournament among the disabled “Overcoming” took place. Its main participants were the athletes with visual and hearing disabilities, as well as the athletes with the musculoskeletal system challenges who took part in demonstration performances. In 2013, the tournament was held for the second time.

'To date, SAMBO competitions among the disabled have no analogues in the world practice,' remarks Roman Novikov.

According to him, the historic event was November 5, 2016. A meeting was held at the Ministry of Sport of Russia that day and the SAMBO sport discipline was included into the sport of the blind in the All-Russian Register of Sports.