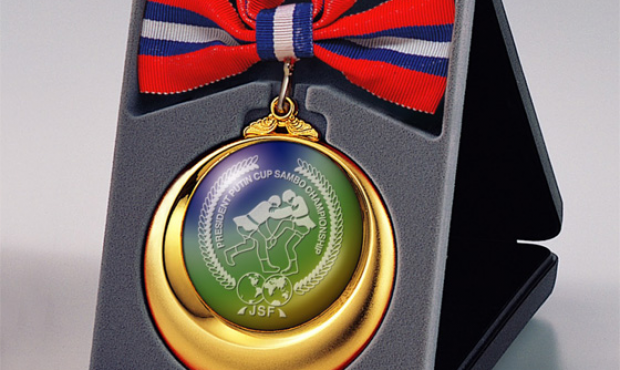 Medal – from French medaille – is a metallic sign, oftener circular, with convex images, awarded for heroism, outstanding services, in memory of an event or a person. As in the world of sports Olympic Games are an Apogee of recognition of athlete’s merits, let’s talk a bit about the Olympic medals.

Their first holders were the winners and medalists of 1896 Olympics in Greece. Then Olympic champions were awarded with silver medals and olive wreaths and diplomas, and runner-ups - with copper medals and laurel wreaths with diplomas. On the front side of those very first medals Zeus holding in his hand a globe with the goddess Nike was depicted. Near there was an inscription in Greek: “OLYMPIA”. On the back side an image of Acropolis with an inscription in Greek “International Olympic Games in Athens in 1896” was placed. Those awards weighed only 47 grams and were minted at the Paris Mint.

Medals of the Summer Olympics in London this year were the most expensive in the whole history of the games. For their manufacture eight tons of gold, silver and copper have been delivered to the UK from Mongolia and the American state of Utah. They were also one of the heaviest Olympic medals. A gold medal weighed about 410 grams, if compared to medals in Beijing – they weighed about 200 g.

The design of medals was developed by a British artist David Watkins, who decided to represent the Greek goddess of victory Nike on them. On the reverse side - the Olympic Games logo on a background of light emitting stars that reflects the spirit and tradition of this event. The river Thames is also depicted on them.

But let’s back to SAMBO. As we already reported on our site in early February in the Japanese city of Saitama a student championship of the country will be held, which will have a respected name - “Russia’s President Vladimir Putin SAMBO Cup”.

Japan is a country with very strong wrestling traditions. Suffice it to say that the Japanese are trendsetters in modern judo, and freestyle wrestlers, especially female ones, consistently rise to the pedestals of world championships and Olympic Games.

So SAMBO in Japan is now thriving with the support of judo legend Mr. Yasuhiro Yamashita and his assistant, a member of the Executive Committee of the FIAS Mr. Nobuyuki Asai. And the tournament in January, which will be the qualification stage for the wrestlers of the country of the rising sun for 2013 Universiade, is a glorious confirmation of that.

Medals are an Apogee of the holiday, but we need to think about them now. That is why in December Japanese designers presented their projects to the consideration of our spectators, that we present today to our readers.

And who will be awarded with them, we will know very soon, as it is just a bit more than a month to the beginning of Japanese “Russia’s President Vladimir Putin SAMBO Cup”.