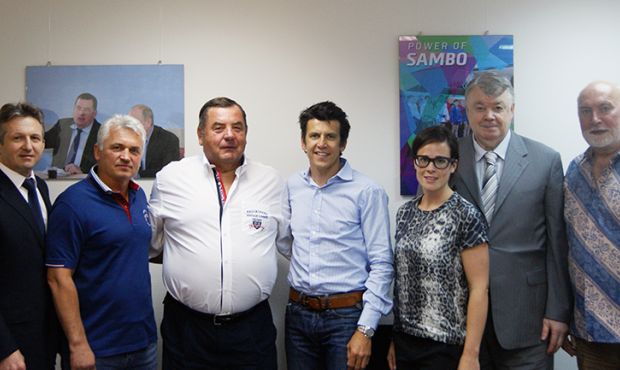 Today, August 8 at the office of the International Federation of Sambo in Moscow management of FIAS held a working meeting with the representatives of the International Olympic Committee (IOC). IOC was represented by the sports director Christophe Dubi and employee of the Sports Department of the organization Hannah Burns. Alexander Kozlovsky - Vice-President of the EOC presented the Olympic Europe. FIAS was represented by FIAS President Vasily Shestakov, Vice-President of FIAS Sergey Eliseev and FIAS Executive Director Sergey Tabakov. Topic of discussion: the most exciting for all sambists of the world - FIAS recognition by the International Olympic Committee.

Expressing gratitude for the warm welcome and the opportunity to meet with representatives of the World SAMBO Christophe Dubi said: "During our cooperation we have seen how SAMBO has grown, how International Federation of Sambo changed. You have worked hard to promote SAMBO in the world, change its face towards modernity and entertainment. The doors of the International Olympic Committee are open for everyone there are no figures for the federations - the members of the IOC, which would hold us back or limit us. From you at the moment we expect only a few changes in the structure and system of work that will result in full compliance of the Federation with all the requirements of IOC and recognition will be received by you immediately."

Changes that are expected from the International Federation of Sambo concern several issues. FIAS must in a very short time, no later than the next Congress, reorganize its leadership, in particular, the executive committee towards reduction of the presence in its composition of the pioneers of SAMBO - the Russians.

It is also necessary to increase the role and participation of athletes in the global SAMBO movement. It can be implemented in different ways: the introduction to the Executive Committee of the FIAS at least one athlete with the right to vote, who could influence decision-making in the FIAS and represent the interests of the main figures in the sport - athletes, and more active work of the special FIAS commission of athletes.

Also, the IOC expects from FIAS certain decisions, such as development by the International Federation of Sambo specific documentation on combating fixed matches, as well as in strengthening the work of the Commission on Ethics of FIAS.

The International Olympic Committee expects from FIAS more clearly reflected additional values of our sport in the philosophy and concept of SAMBO, which FIAS presents to all lovers, admirers and followers of SAMBO in the world.

After report of the FIAS President Vasily Shestakov about the figures that have characterized successful performance of SAMBO in the program of the Universiade in Kazan, namely the 45 member states, 21 - the number of countries whose athletes won medals in SAMBO tournament and 5-7 thousands of spectators daily, Christophe Dubi asked to reflect this and much more what has been done by FIAS since the application to the IOC (September 2012) in the additional document that FIAS will send to the International Olympic Committee very soon.

"This meeting is very important for us. In the near future we will carry out all the necessary work to prepare the documentation in accordance with your recommendations and comments, at the next Congress FIAS will adopt all the decisions that are currently needed. And I hope that our joint efforts will result in success, Olympic success of SAMBO"- summed up the results of the working meeting of the management of FIAS with the representatives of the International and the European Olympic Committee President of the International Federation of Sambo Vasily Shestakov.