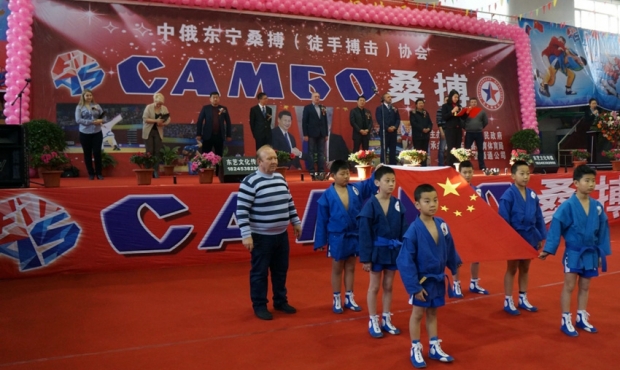 The second school of Sambo opened in the Chinese city of Dongying on December 14. The opening ceremony was attended by dignitaries from China and Russia. Young Samboists from Primorsky Territory and athletes from the Sambo Federation of Suifenhe showed their skills on the wrestling mat. Now nearly 100 children will participate in the second school of Sambo under the guidance of a Russian coach.

The opening ceremony was attended by special guests who came from Russia for the occasion, including the head of the Ussuri Urban District Nikolai Rud, sports director of the International Sambo Federation Dmitry Maximov, member of the Legislative Assembly of Primorsky Territory Valery Kan, Duma deputies for Ussuri Urban District and Roman Klimenko and Anastasia Janiszewski, and president of the MMA Federation of Primorsky Territory Yuri Chernenko. 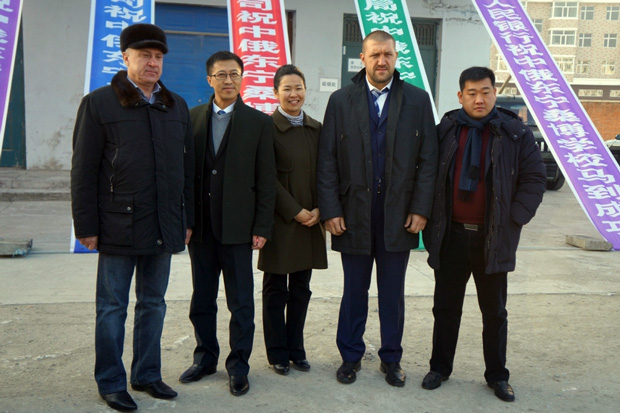 The Russia delegation accompanied by their Chinese colleagues visited the new Sambo hall that opened at the secondary technical college in Dongying.  Members of the delegation visited the combat hall and the gym and then went to the city stadium where the opening ceremony was held. Hundreds of schoolchildren and residents of Dongying were present for this special occasion.

The event began with a welcoming speech by the mayor of Dongying, who noted that the opening of the Sambo school was an expansion of friendly ties between the two nations, strengthening cooperation, and said that Sambo is a traditional Russian form of martial art. 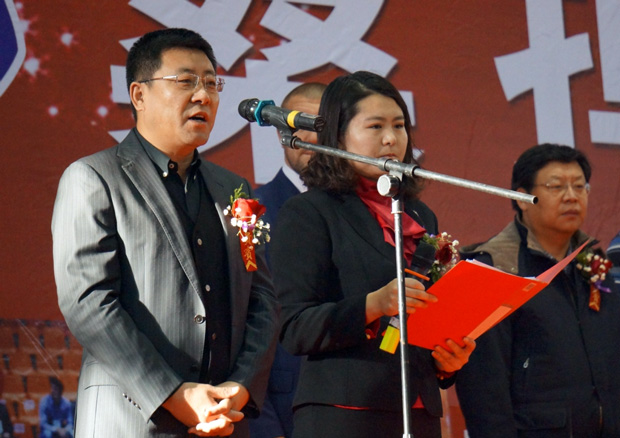 The head of the Ussuri Urban District Nikolai Rud emphasized in his reply that sports are a messenger of peace and friendship, and and expressed confidence that Sambo would be actively developed in China. 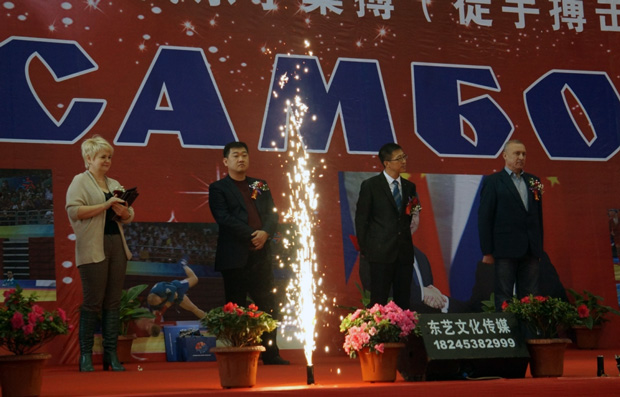 Member of the Legislative Assembly for Primorsky Territory Valery Kan addressed all those present at the opening ceremony for the school of Sambo. He noted that a few days ago a Sambo match between children from China and Russia had been held in the seaside town of Artem.
The young Chinese Samboists made a bold, courageous step in their encounter with the athletes Primorsky Territory. 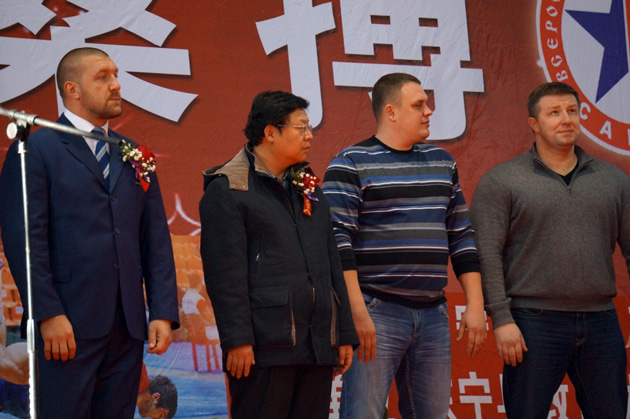 All those present applauded the Chinese boys who were the "pioneers" of Sambo in China.
Young Sambo wrestlers, accompanied by Russian coach Alexander Gorshkov, carried the flag of China around the hall.
Then all the dignitaries and spectators enjoyed a demonstration performances by athletes of the  Sambo Federation of Suifenhe and Samboist from Primorye. 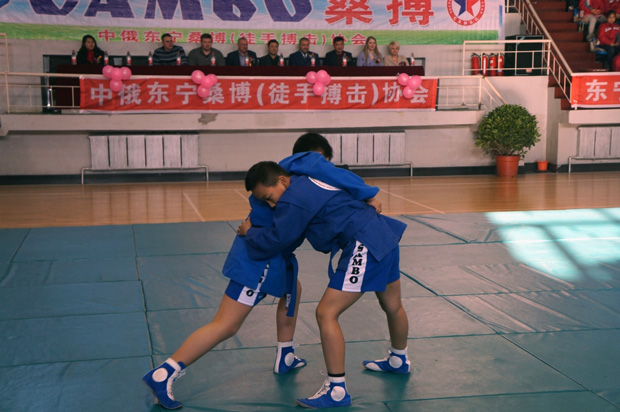 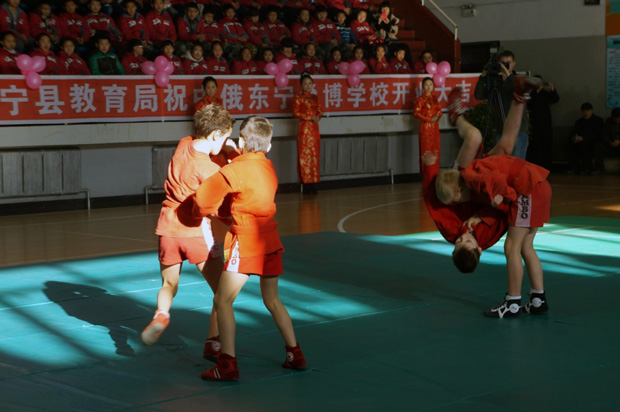 At the end of the ceremony, the Russian and Chinese delegation exchanged gifts and wishes for further productive cooperation. 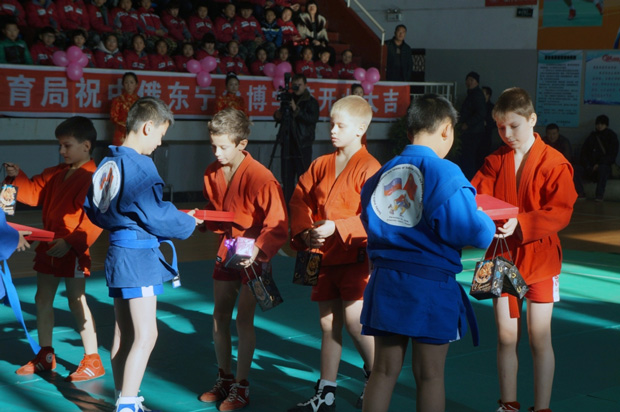 It's worth noting that young Chinese Samboists are very determined. Yang Yong-lin said he wanted to be a world champion in Sambo.  Another young athlete, Zhou Shen-li, who trains at the school of Sambo in Suifenhe, said he'd been practicing Sambo for only six months and still had a lot to learn.  He has already traveled to Artem and talked with the Russian boys, and he really liked it.

The opening of the Sambo Federation and China's first Sambo hall took in the city of Suifenhe on July 11, 2014. The initiative to promote Sambo in China came from member of the Legislative Assembly of Primorsky Territory Valery Kan, with the support of the International Sambo Federation represented by its President Vasily Shestakov.
The Chinese government and entrepreneur and philanthropist Yuan Dae-jung helped to open the two schools of Sambo.
The first school now has 20 children aged 7-11 years, and the second in Dongying will have about 100 people. Alexander Gorshkov, Master of Sports of the USSR in Sambo will be the coach. 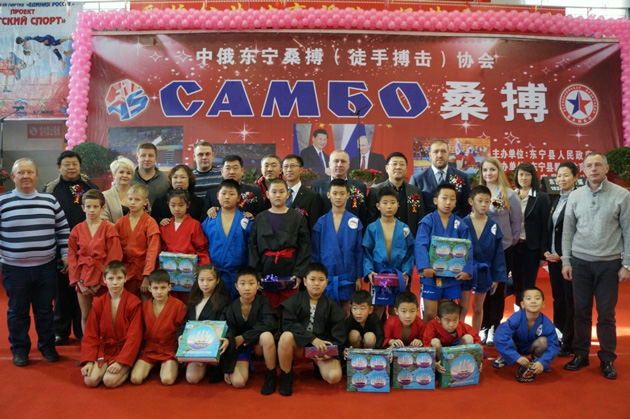