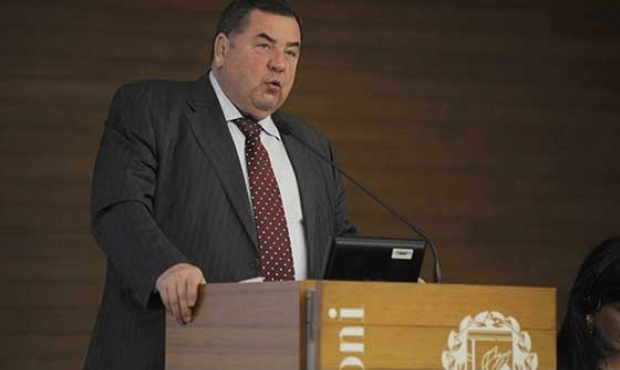 The third Russian–European Economic Forum “Financial Investment in Russia: New opportunities for businesses and investors” took place on 6 November 2013 in Milan (Italy). Senior managers from more than 300 European investment companies and banks, representatives of more than 100 financial institutions and funds, and prominent figures from the world of culture and sport took part in the forum, organised by the General Invest company in cooperation with the Moscow Exchange.

The main aims of all General Invest’s forums are to facilitate investment and financial cooperation between Russia and Europe, and also to create favourable opportunities for developing mutually advantageous relations, to discuss key cooperation issues, and to set up direct links between the business and cultural circles of Russia and Italy.

The Milan forum looked not only at issues concerning financial relations between Russia and Italy, but also at the prospects for cooperation in culture and sport. The International SAMBO Federation (FIAS) was represented at the forum by Vasily Shestakov, President of the FIAS and Deputy of the Russian State Duma, Roberto Ferraris, Secretary General of the FIAS, and Sergei Eliseyev, President of the European Sambo Federation.

Vasily Shestakov, President of the International SAMBO Federation, presented a report at the prestigious economic forum on the contemporary development of sport in Russia in general and on the development of Sambo wrestling in particular. At the beginning of his speech Shestakov noted Russia’s contribution to the global sports movement: “According to research by Sportcall, the authoritative Olympic portal, Russia was one of the three most influential countries in sport in 2012 and acquired the status of world sport leader for the period 2013–2018. Thus Russia today has undertaken important and responsible obligations in the field of the international and Olympic sports movement.”

Incidentally, Manuela Di Centa, Honorary Member of the International Olympic Committee and double Olympic cross-country skiing champion, who was taking part in the forum, also noted this fact in her speech.

The FIAS President went on to talk about SAMBO in his report. In particular Shestakov noted: “SAMBO today is a developing sport that is rapidly growing in popularity. This martial art embodies values such as discipline, commitment, respect for one’s opponent and a high level of skill. SAMBO is undoubtedly a commercially attractive sport at all levels. The values of the SAMBO brand have great market potential, are easy to understand and are well received by the audience, and SAMBO has excellent prospects for becoming increasingly attractive for the media.” The FIAS President also spoke in detail to those present about the social programmes being run by the International SAMBO Federation, about the work being done to get SAMBO recognised by the International Olympic Committee, and about successes achieved in getting the FIAS integrated into the international sports movement.

In conclusion the FIAS President noted: “Please allow me, as President of the International SAMBO Federation, to give you my assurance that the sport of SAMBO is willing to act as an equal partner in business between Italy and Russia. I am sure that by combining our potential and efforts we shall be able to achieve impressive success in developing mutually beneficial relations and direct links between the business and cultural circles of Russia and Italy.”

At the end of the forum the Italian investors, more than 300 of whom had gathered on this day at Bocconi University, were united in their view that there was a lot of potential for financial investment in Russia and for Italian companies to enter the Russian stock exchange. Vincenzo Trani, Chairman of General Invest, who is also Honorary President of the Italian Sambo Federation, emphasised the importance not only of initiating and organising events like this to strengthen relations between Russia and Italy, but also of ensuring a response to them by Italian investors. He said: “The genuine interest shown by Italian investors and companies in relation to Russia, and the steps that they take after our forums, give us reason to believe that there will soon be effective cooperation between the financial markets of our two countries.”

Concluding his remarks on behalf of the International SAMBO Federation at the economic forum in Milan, Vasily Shestakov said:

“It has been a pleasure to see the warm attitude towards Russia which has been expressed by the speakers at the forum. Much has been said about the improvement in the investment climate in Russia, the reduction in the level of corruption and the positive trends in the development of the country’s economy. The participants in the forum have also noted the efforts which Russia is making in terms of developing sport and promoting a healthy lifestyle.

“As far as SAMBO is concerned, Italy, where the European SAMBO Championships were successfully hosted this year in Crema, is a country where the sport has a big following. Italian Sambo wrestlers have recently featured with increasing frequency in the ranking tables of the biggest international SAMBO competitions. People in this country know our sport and love it. That’s why the response to the report by the International SAMBO Federation was very positive.

“I am sure – and this is confirmed by the interest in our sport shown at the forum in Milan – that SAMBO is becoming an increasingly attractive and popular sport for representatives of business. I definitely believe that our sport is worthy of this.”