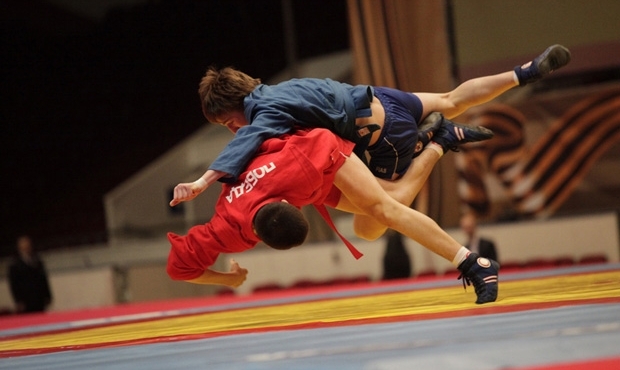 This is the 15th time the international youth tournament "Pobeda" established at the initiative of the Russian President Vladimir Putin is held. Team competitions for sambists of 15 - 16 years are taking place in St. Petersburg, in the Palace of Sports "Anniversary" and can boast the following statistics: 290 participants are divided into teams consisting of 9 federal districts, 9 cities of military glory, and 11 hero-cities. Besides the Russian team, teams from Ukraine, Belarus and Latvia are taking part in the legendary tournament.

Traditionally, the tournament "Pobeda" is not only a sporting event but also an impetus for patriotism, respect for the military glory and deeds of heroes who fought for the peaceful life of future generations. That is why the tournament started at 10:00 Moscow time not with combats in some enclosed space but with a visit of all the participants of the tournament to the Piskaryovsky memorial cemetery where children laid wreaths and held a minute of silence in memory of all those who died and fought in World War II.

Also on May 3 there will be an official opening ceremony and the super final of the tournament where the winners in the hero-cities and federal districts categories will meet.

Photos of the first day of the tournament are provided by the Society of Combat Sports "Otechestvo" (Photographer - Boris Bukhtiyarov).

[Photogallery] XV International Youth Tournament "Pobeda". Day 1
Share
Blog
Recent photos
Latest news
Recent videos
Latest news
Follow latest news You are subscribed!
Thank you! Your confirmation email has been sent to your email.
This website uses cookies to ensure you get the best experience on our website More info Got it!