Japanese SAMBO athletes were honored at the Ministry of Education 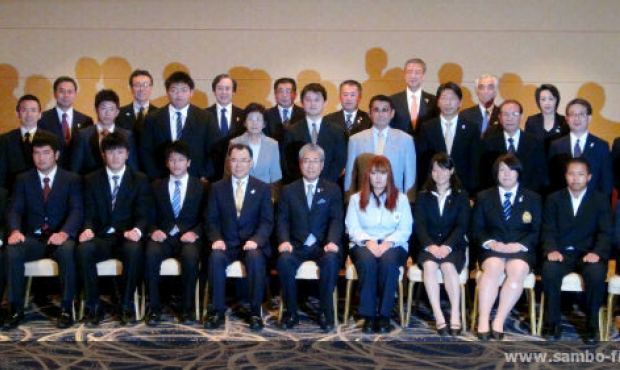 The solemn ceremony of the Japanese athletes’ honoring was held at the Ministry of Education, Culture, Sports, Science and Technology of the country. Minister Hakubun Shimomura presented awards to the gold medalists of the World Championship and Universiade in Kazan, as well as to the world record holders and their coaches. The Japanese SAMBO athletes also appeared to be among the athletes marked at such a high level, as the local SAMBO Federation reports.

Rui Takahashi and Shorey Hamada, who became winners in their weight categories at the 2013 Universiade, where SAMBO was included for the first time this year, were awarded special prizes for athletes. In addition, their coaches Toshikiho Koga (Takahashi’s coach) and Shinobu Taniguchi (Hamada’s coach) were marked with awards for coaches.

– It is a great honor to participate in such a ceremony and to receive such a meaningful award, – Rui Takahashi said. – I’m looking forward to November when the World SAMBO Championship starts and I am planning to fight for the “gold” at homeland of this combat sport – in Russia.

Representatives of the Japanese SAMBO Federation underline that the achievement of good results by their national team at the SAMBO competitions became possible thanks to the substantial support of the FIAS. The results achieved not only made SAMBO fans all over the world talk about the Japanese SAMBO athletes in the superlative degree, but also the Japanese themselves continue the development of SAMBO just recently initiated in the Land of the Rising Sun.