Remarks from commentator positions of the Minsk World SAMBO Championship 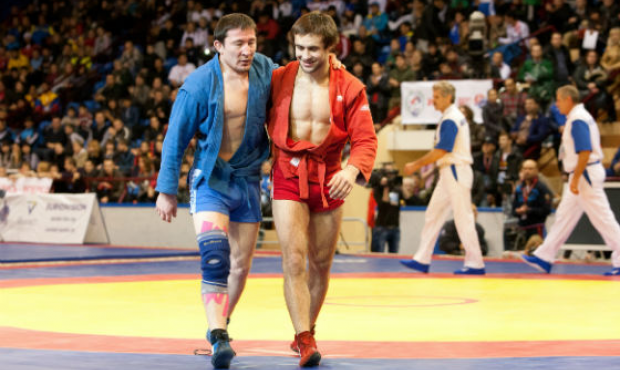 View of what is going on changes a little while one gives the comments on the competitions. In the end there is information drawn from communication with the trainers and sportsmen, chiefs and colleagues, and the television picture commented itself. All of you could see the picture on the FIAS website, and I would like to share the information I heard. 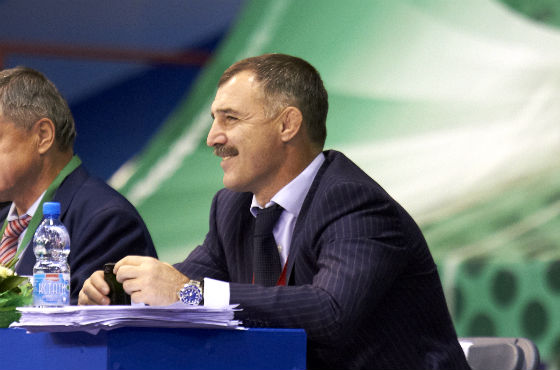 “SAMBO perhaps is the only sport having the method called by a woman name Yadviga. The translation of this beautiful word is “warrioress”. And the name of this method in formal terminology means “reverse shoulder bundle by leg rolling”. The SAMBO practitioners are definitely great romanticists”, Mikhail Martynov, Head Coach of Moscow national team, Honoured Master of Sports, shares his thoughts about the names of the methods in SAMBO.

“I haven’t known such a method like “strigunok” till today, but it is this method performed by Alsim Chernoskulov that deprived me of the golden medal of the Championship. An interesting technique in SAMBO”, Livan Zhorzholiani (Georgia, weight category of 100 kg).

It happened so that I left Minsk after the World Championship together with Fedor. We flew the same flight to Moscow where the legend of SAMBO has recently moved together with the family. We talked about family and work, combined martial arts and SAMBO.

A formal suit and a tie, a classic coat and a small bag and…an umbrella. Moreover the umbrella in a rainless weather looked a little bit strange. My question – his answer. “It rained yesterday, and Vladimir Yaprintsev (President of Belarusian SAMBO Federation) took care of me and presented it to me for my comfort, now I am carrying the present home.” 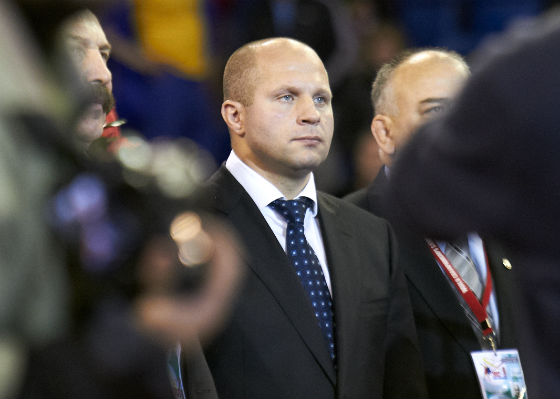 It came to my mind at this moment that the first invention that reminds of a modern umbrella appeared more than 1200 years before the birth of Christ. The habitants of Ancient East countries started to use it as a light protection means. And only high-ranking persons, governors and imperators in particular, could use it. And even here our Russian “Last imperator” corresponds to his high rank.

The Italian woman SAMBO practitioners surprised again and again. The national team of this country sensationally won 3 medals, 2 golden medals and a silver medal, at the World Championship among Youth in Bulgaria. Miranda Dzhambelli (weight category of 80 kg), second winner in Sofia, reached the final in Minsk and gave way very little to the experienced and famous Ukrainian Marina Prishchepa.

Italy is a country where a very strong woman judo school has always been. And the weaker half of the Italian SAMBO national team has been making a significant progress lately. Athleticism, facture (long levers), good technique and constant combative nature of all the young girls who protect the flag of Italy strike the eye. 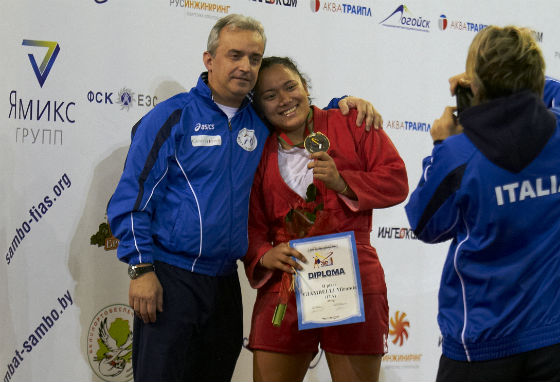 All the specialists in Sofia and Minsk unanimously admitted that the anthem of Italy will soon often sound at the European and World Championships.

About the judo and SAMBO practitioners

The opposition of these two schools of martial arts is an eternal question. Smothering methods in judo, painful methods to legs in SAMBO and common words heard from judo practitioners “There is nobody to combat with in this your SAMBO”. 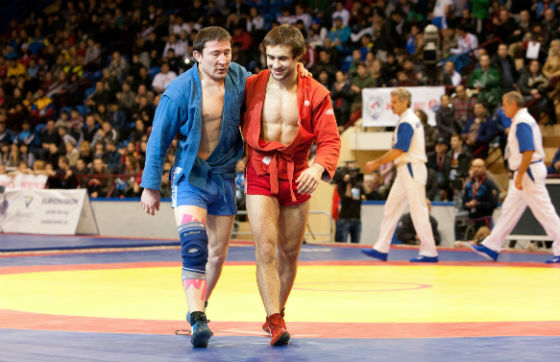 But I wanted to say quite a different thing. Perhaps it is high time for us to cease this discussion and endless comparisons and realise that both judo and SAMBO are wonderful sports. And the sportsmen, trainers and chiefs have to join forces of these two martial arts, borrow the best from each other and become brighter and more interesting thereby to joy of spectators and fans.

The next World SAMBO Championship will be held in Saint-Petersburg, the culture capital of Russia, in November as usually. And now the SAMBO fans all over the world believe that it will be held under the aegis of the International SAMBO Federation which will be recognised by the International Olympic Committee by that time, though yet temporarily. And we would remind that the Conference of the IOC Executive Committee where this decision will be possibly made will be held very soon, at the beginning of December this year.

Little time is left to wait!