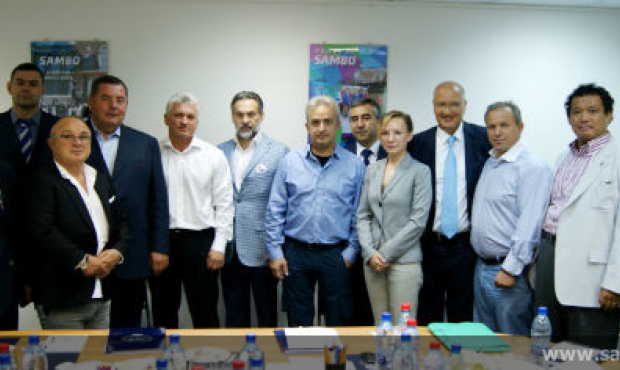 Opening the meeting, FIAS President Vasily Shestakov informed the participants about the situation that has arisen between the group of adventurers led by Michael Schultz, on the one hand, and the International Sambo Federation - on the other. As you know, in July of this year there was an attempt seize the power in the FIAS by creating forged documents into the Trade Register of the canton of Vaud that changed the composition of management bodies of the International Sambo Federation.

As a result of legal proceedings and hearings the Court of Lausanne supported the position of more than 40 National Sambo Federations and delivered a clear-cut judgment of provisional measures in favor of the legitimate management of the FIAS led by President Vasily Shestakov. Thus, an external independent jurisdiction set the record straight. Hereafter the International Sambo Federation intends to bring to justice the perpetrators to lawlessness, including criminal proceedings.

Vasily Shestakov also recalled that the International Sambo Federation has recently achieved tangible results. This year alone, among the achievements of the FIAS appears the Sambo tournament at the Universiade in Kazan (which was attended by 45 teams, 21 of them were rewarded with medals), a record-breaking championship in number of participating countries (26 national teams) of Pan-America, an exemplary organized Asian Continental Championship in Seoul, the first in the history African Championship and many other achievements. The most interesting thing is that in their speeches in the media raiders, who actually not only didn’t help, to achieve those successful results but only mingled everybody in every possible way, are now trying to get credit for all the development of Sambo.

During the discussion of the current situation, members of the Executive Committee of the FIAS concluded the need to inform the authorities of various countries – Ministries of Sports, the National Olympic Committees and the National Sambo Federations – about those people who are involved in precarious actions against the FIAS that only discredit their National Sambo in Federation the eyes of the world SAMBO public.

Next on the agenda was the issue of possibility of discussion at the FIAS Congress of affiliation of the new of the Federations as members of the International Sambo Federation. Combat is actively developing all over the world and is gaining the sympathy among the sport fans across all continents, and this means that the Sambo family will grow and expand. In addition, according to the results of the Congress of the International Sambo Federation, some countries may become probation member for the FIAS - this will give a token for them to move forward in the development of Sambo.

The members of the Executive Committee have also touched upon the FIAS competition calendar for the next year. Kazakhstan, which was planned as a host for the World Cup in 2014, will not be able to host such a major tournament due to technical difficulties. In turn, Japan claimed a desire to arrange the World Sambo Championship yet at the Universiade in Kazan. The members of the Executive Committee of the FIAS reviewed the application of the country of the rising sun and voted for her candidature – it is Japan that will be recommended to the FIAS Congress as a host for Sambo main tournament of the year.

Another addition, which is expected to be brought to the FIAS calendar, is the inclusion at all stages of the World Cup of the competitions in Combat Sambo in the following year. As the president of the All-Russian and European Sambo Federation Sergey Eliseev emphasized today this kind of Sambo has many fans. It is included in the programme of the World Sambo Championship, but is not always represented at stages of the World Cup. Meanwhile, it is a spectacular and popular kind of sport, and many sambo wrestlers would like to participate in as many prestigious competitions as possible.

Recently, some online resources have become confusing for the users, claiming themselves to be the official FIAS website. In this regard, members of the Executive Committee of the FIAS confirmed that the only possible official website of the International Sambo Federation is: www.sambo.sport. It is at this website where you can find all the accurate information on the activities of the FIAS.