Meeting of FIAS Executive Board 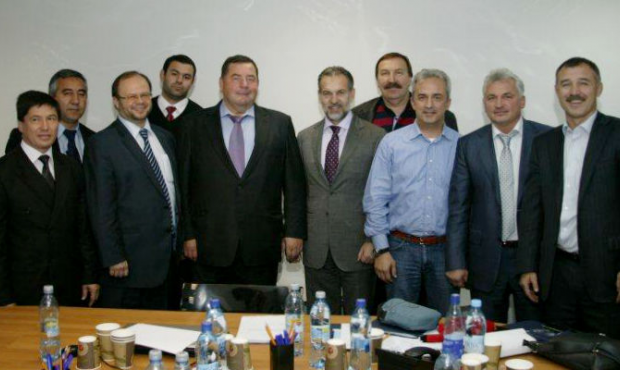 Cream of SAMBO management met together at the meeting of the FIAS Executive Board which took place in the Representative office of International SAMBO Federation  in Moscow on 29 September. The SAMBO management has a lot of issues to discuss and debate on the eve of the main starts of the season – the World Youth Championship among Youth (Bulgaria) and World Championship (Belarus).

Preparing Minsk to the World SAMBO Championship, which will be held in the capital of Belarus from 9 to 11 November, is one of the main issues of the Executive Board. And here Mr. Vladimir Yaprintsev, President of the Belarusian SAMBO Federation took the floor. He told about all the nuances of preparing Minsk to the main SAMBO start of the world season.

Currently the contract with television is concluded, Beleteleradiokompaniya will be a hostbroadcaster of the competitions, which with Eurovision’s (EBU) support will distribute the live broadcast of the Championship for the television companies of 3 continents - Europe, Asia, and America. Internet fans can also watch the Championship online. One can do this on the updated FIAS website where.

The hall, advertising campaign, hotels, and transport – everything has been prepared by now to welcome SAMBO fans in Minsk. One month before the start there left only small corrections and clarifications to have everything on the highest level in November.

Mr. Vasily Shestakov, FIAS President, told members of the Executive Board of his meetings with the leaders of the world and European Olympic movement.

The European Olympic Committees (EOC) is the International Olympic organisation consisting of 49 national Olympic committees of Europe. The EOC is headed by an Irishman Mr. Patrick Hickey, an IOC member, a black belt incumbent in Judo and the participant of the first International SAMBO competitions in Europe by the way.

Negotiations with Mr. Hickey, which were held in the framework of the Olympic Games in London, convinced the FIAS that he is genuinely interested in the development of SAMBO in Europe.

In May this year Vasily Shestakov mainly discussed the issues relating to the SAMBO in Asia at the meeting with him. During the negotiations, it was agreed that in the nearest future SAMBO will be included in the SAMBO programme of major Asian complex events such as indoor games, Beach Games and the Asian Games. Sheikh Ahmad Al-Fahad Al-Sabah also invited FIAS delegation to make SAMBO presentation at the General Assembly of the Olympic Council of Asia (October 2012, Moscow).

One year is left before the Summer Universiade 2013 in Kazan (Russia) start, where SAMBO is included in the Student Games, as an additional sport.

In June this year, Mr. Vasily Shestakov, FIAS President, and Mr. Sergey Eliseev, President of the European SAMBO Federation, had a working visit to Kazan where they met with Mr. Rustam Minnikhanov, President of Tatarstan. Kazan supports all athletes with meals and accommodation, FIAS in its part undertakes a partial payment of travel for 3 persons of each team participating in the Universiade.

TATNEFT ARENA is the home arena of the Russian hockey team Ak Bars, designed for 10,000 spectators. It was built by the Finnish company in one year only, its opening on 29 August 2005 was marked by the performance of the legendary Scorpions.

Mr. Sergey Eliseev, Head of the corresponding FIAS committee, reported on the issue. Several new lines will appear in the calendar of the official FIAS competitions in the future. Specifically, it is decided to hold the World Cup on different continents of the world; this will expand the SAMBO geography. Now World Cups are held in Europe, Pan-America and Asia. In 2013, the parity between the continents will be restored and one of the World Cups of SAMBO will be organised by the African SAMBO Federation which is going to hold it in Morocco.

They also decided to hold World SAMBO Championships on different continents as well. In the meantime, Europe remains the leader of the world's SAMBO Forum organizers; it was there where the World Cup 2011 and the World Championships 2012 and 2013 got a registration. We believe that this tradition will be broken soon, now Africa is seriously interested in the organisation of the World Cup 2014.

The decision to hold the World Championship 2013 among Cadets (athletes 15-16 years of age) was made. The European SAMBO Championship among athletes of this age passed successfully in Tallinn (Estonia) in September. Positive response of professionals, public and the media gave these competitions a rise to “venture” conquering not only the Old World, but the whole world.

The members of the FIAS Executive Board are going to meet next time in Minsk very soon, before the World SAMBO Championship in November this year. There, immediately prior to the FIAS Congress, they will once again discuss the most pressing issues of SAMBO in the world. They will discuss it in order to develop a joint position and move on joining their efforts and strengths.

And the modern SAMBO do need these strengths.