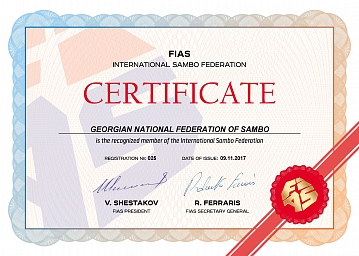 Independent Sambo Federation of Georgia was established on May 24th, 1991.

Since 2012 the President of Federation has been Soso Liparteliani. Tbilisi has seen the first Sambo sport in 1933, in Technical Secondary School of Physical Culture. The first coach was Ilo Svaneli (Tomashvili).

In 1939 the First USSR Championship was held in Leningrad the first champion representing Georgia was Konstantin Koberidze in the weight category - 87 kg.

In Autumn 1957 there was the first international competition between teams of Georgia and  Hungary where Georgian team won.