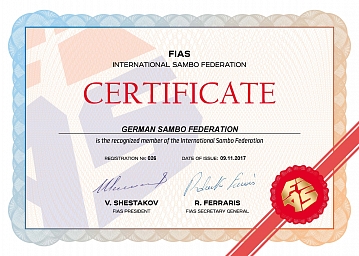 German Sambo Federation was created in 2000.

Since 2001 Federation participates in all the European and World championships. For example, in 2001 the first German team takes part in the World Championships in Krasnoyarsk.

Since 2003 closed championships (about 100 or more participants) are held. In 2003 after two years of struggle Federation is registered as a separate type of martial arts in Germany.

A special role in the development and formation of Sambo was played by a sport society Gut Hale Itzehoe (today Itzehoe Sportsclub) which was the first to open a Sambo club and which is still lead by the Federation President Josef Bart.

Today Sambo is a special way to educate a person where the sport component of particular importance is in a close cooperation with modern effective integration of young people in public life and management system, leading to success, to upbringing an active life position. It was and remains the goal and motivation of activities in Sambo development in Germany.

German Sambo Federation is contacting with the National Olympic Committee of Germany with a view to join the members of the NOC and to the further productively develop Sambo wrestling.