Review: World Sambo Championship 2015 in Morocco (Casablanca, Morocco) — what a joy to witness such an event! 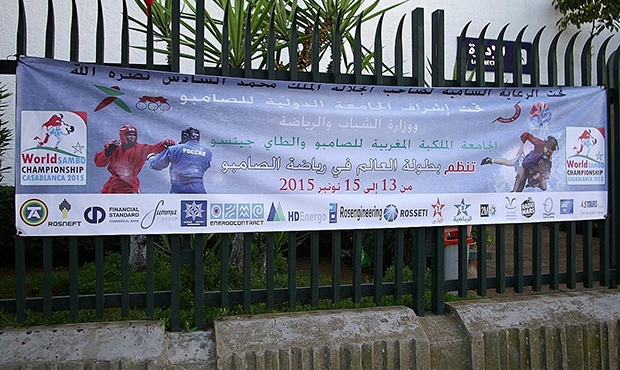 A user with the nickname marokkanka left a review on the www.otzovik.com site about visiting the Sambo World Cup 2015 in Morocco. The style of the author has been retained.

Hello! Yes, we are rarely cheered on in Morocco at such events. All sorts of competitions don't take place here much, and here not just championships, but the World Sambo Championship! Yes, there was this opportunity: our Association of Russian-speaking women were invited to participate in the Championship's opening ceremony.

Honestly, I was captured by the spirit, when we were officially given name badges to go inside the sports complex. The billboard space didn't have enough space for logos of the sponsors and participants of this event. 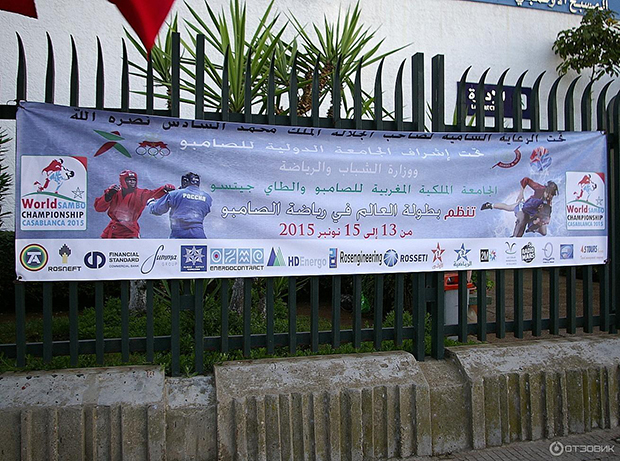 And I walked by the sports complex hundreds of times, but never thought I would get to go inside. 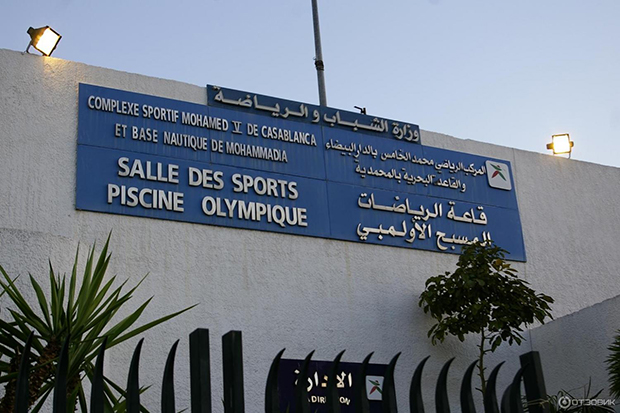 Moroccans made an effort regarding the cleanliness inside the complex, with carpets and flags... But the organization was still somehow quite tight. Invitations for members of our family were printed at the last minute and almost everyone had their names misspelt. My name, for example, was written as SUETLANA, rather than Svetlana. But this is normal for Moroccans: everything is done at the last minute, it is their mentality, and it is futile to fight it.

But strangely, the opening ceremony of the Championship began on time. When we got into the hall, I was surprised to see a small number of people in the stands and a huge number of journalists and reporters. The event was well covered by local and foreign media. There were many journalists from Russia. 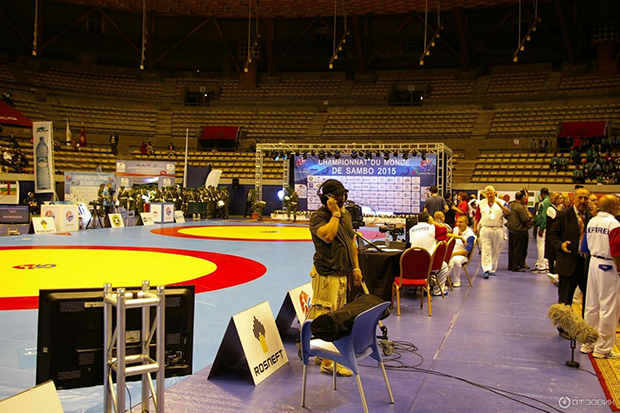 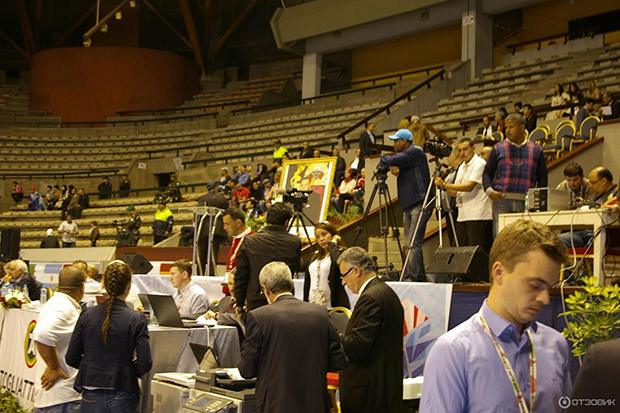 At first, we were busy getting our children dressed up to participate in the concert. But then we took our places in the stands. It was time to look at the hall. Good lighting, billboards everywhere, a large screen to the side broadcasting the performances, and on the other side, pedestals for awarding prizes. 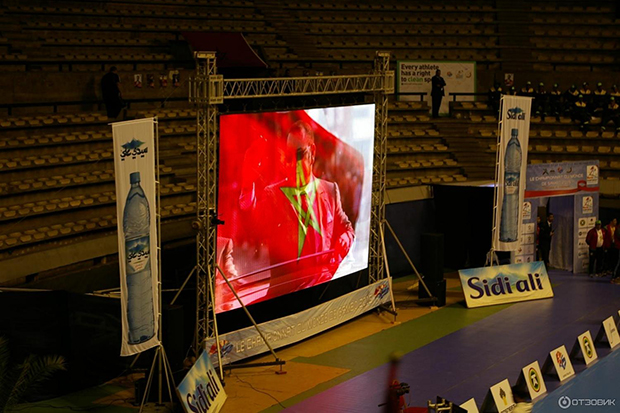 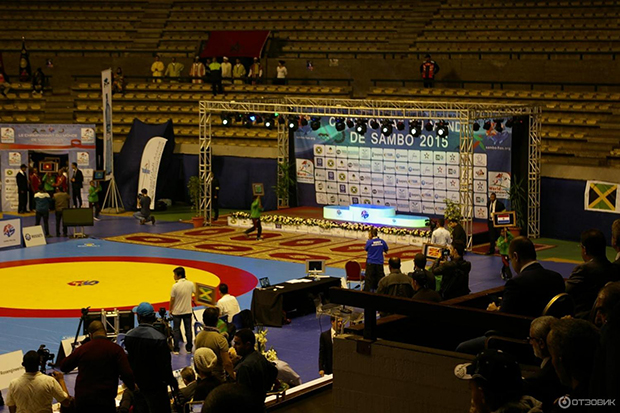 The VIP invitees took a long time to get to their stand. During this time, a Moroccan military brass band came for the warm-up. They played pretty well, better than I expected. And the trumpeters managed to deftly twist their musical instruments. 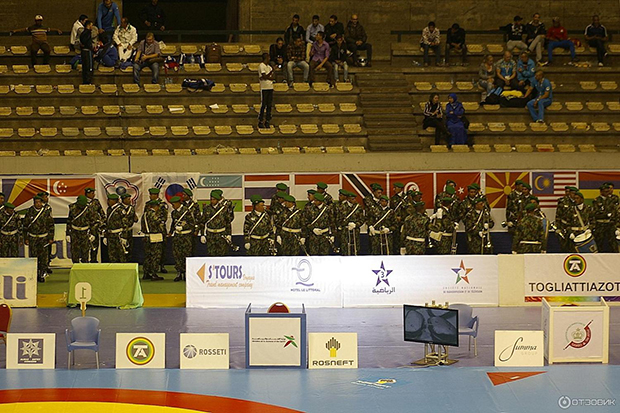 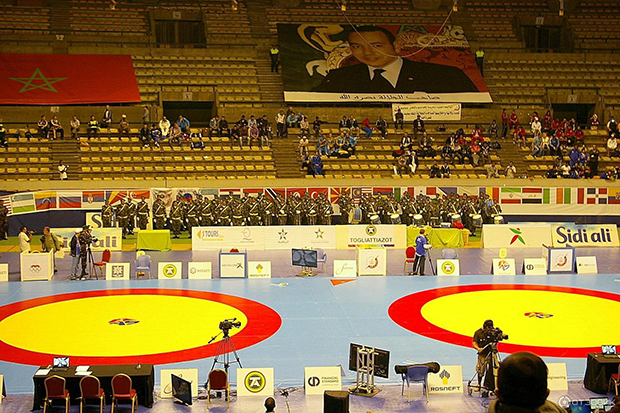 You have probably understood that I was sitting on the opposite side of the hall. It was quite a distance, so not so easy to photograph anything. A procession of children's home residents with placards depicting the flags of countries participating in the Championship started to the sounds of the orchestra in the hall. To my surprise, there turned out to be a lot of placards! I never knew about the size of this event. When the procession finished, the children stood in a row, forming a green wall. 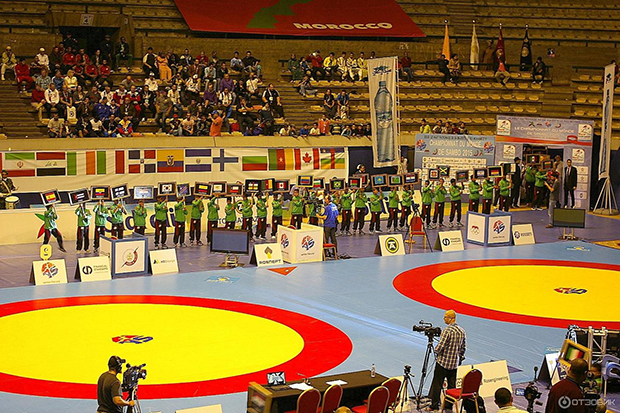 Then all the judges of these sporting events came on to the field. 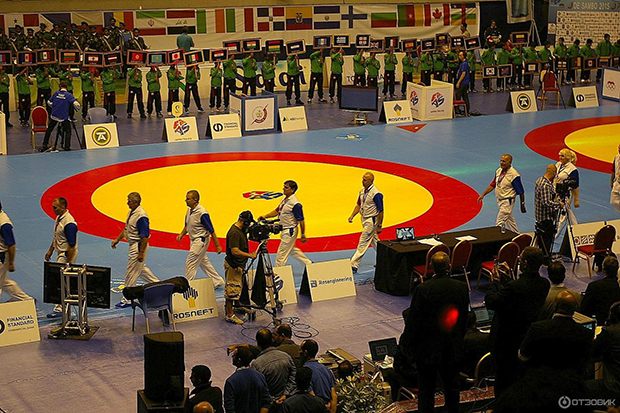 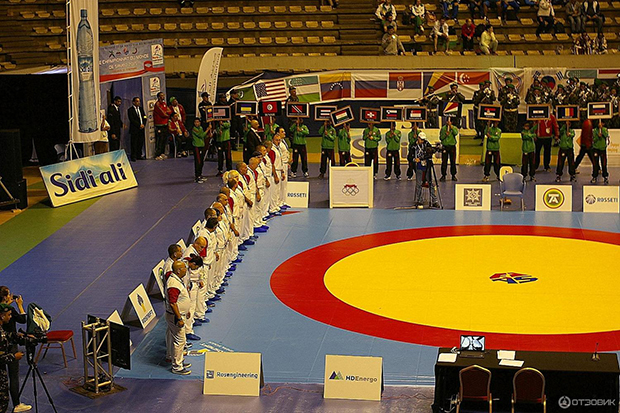 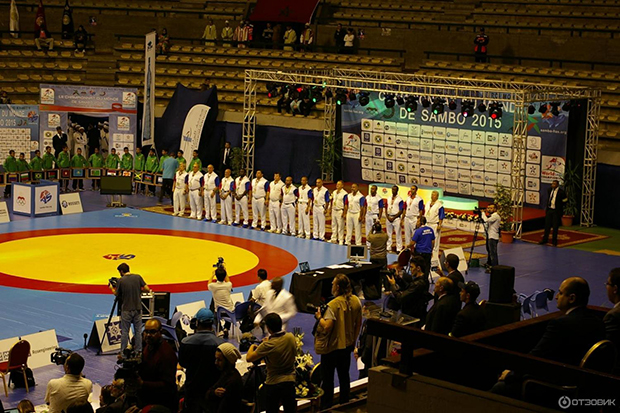 This part of the opening ceremony ended with a solemn procession of Moroccan athletes with the Moroccan banner. The banner was placed in the center of the field, and the entire audience stood up, because the anthem of Morocco was playing. 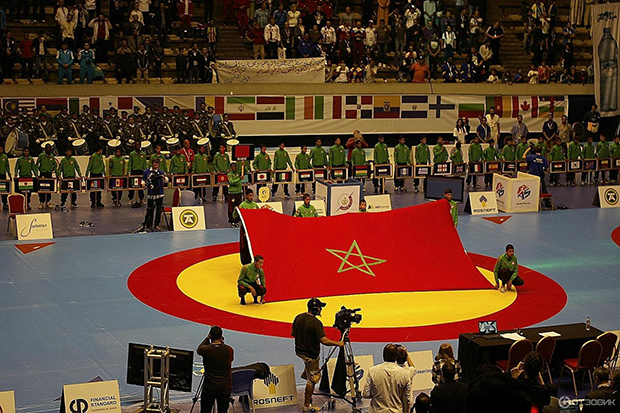 But after this, something happened in the hall that nobody expected. Children of the Russian-speaking women came onto the field and danced a Russian doll dance! It was a real surprise for all the Russian athletes. 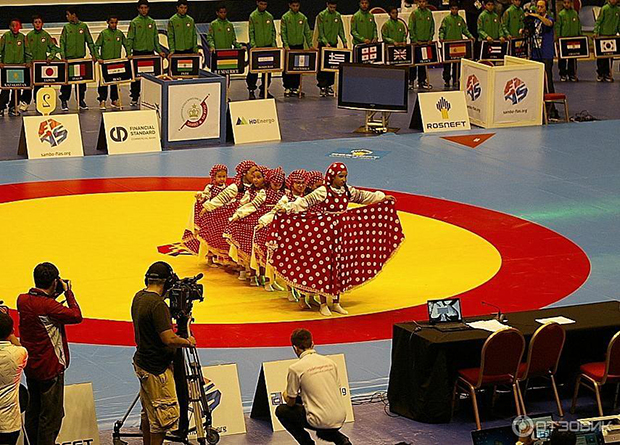 It is a pity that many of the media edited this moment out of their broadcasts, but the local 2M TV channel showed a fragment of the dance on the news, which created a huge impression on all those who knew them.

After the stirring dance, the official part of the opening ceremony followed. Statements were made by various officials, congratulating everyone on the start of the Championship. Thank God, the speeches were brief and concise. Due to the echo, I could not make out words, and it was translated into Arabic. In general, this part went quickly, and nobody managed to get tired.

Then it continued with a small concert. The Russian dolls were replaced by a Moroccan Berber folk group. What they sang remains a mystery to me, but judging by the trembling shoulders of the Moroccan public, it was clear that they liked the performance. 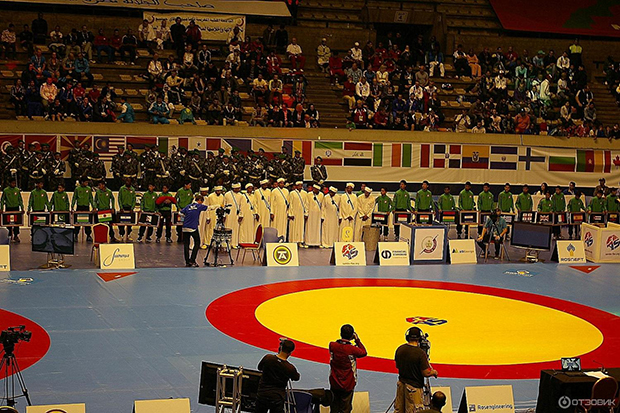 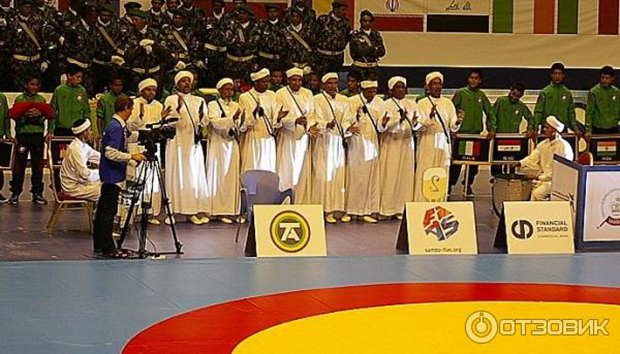 The musical part was concise. After the Berbers the little dolls appeared on the carpet again, this time with the Sunny Circle song. They sang loudly, clearly and simply fabulously! 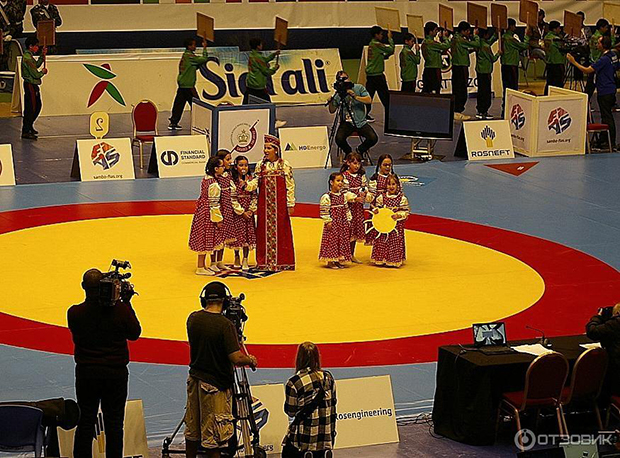 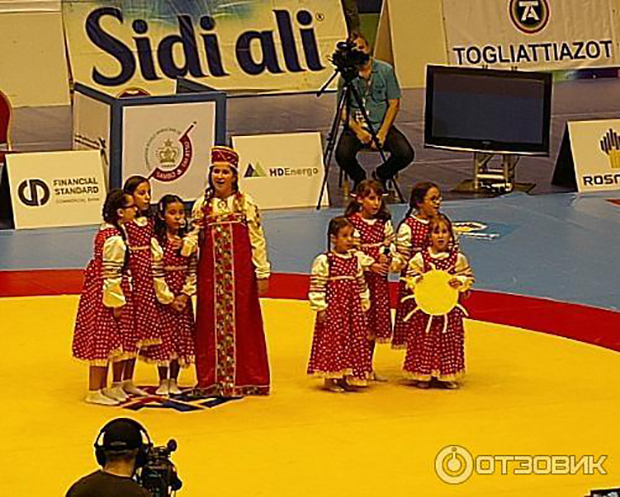 This time, the loudest applause was from the Russian coaches. It was just nice to have such a reception of a children's group. And on this, the opening ceremony ended.

I've never attended the Championship, and then I ended up at the final fights. The fact of the matter is that on the same day in the morning, the qualifying round was held, and in the evening we watched the final match and awards for the winners. First time in my life, I saw real sambo! I loved it. The fights were in multiple weight classes. It was interesting to observe how athletes "grew" in the ring. And as for the men's 100 kg weight category, I have one word: "bogatyrs"!

This summer, I brought a huge Russian flag to Morocco, but I did not even imagine that it would be of any use to me so soon! With us on the stand were representatives of Russian consulate and embassy. And all of them were active supporters of Russian athletes. And the children lost their voices after shouting "Russia" during the performance of the Russian fighters, both men and women. 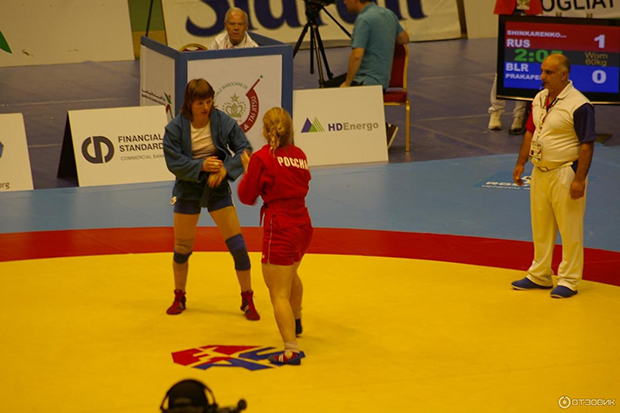 Maybe, thanks to our support, they all won their final matches! How couldn't they win with such a support group: the whole hall could hear us! 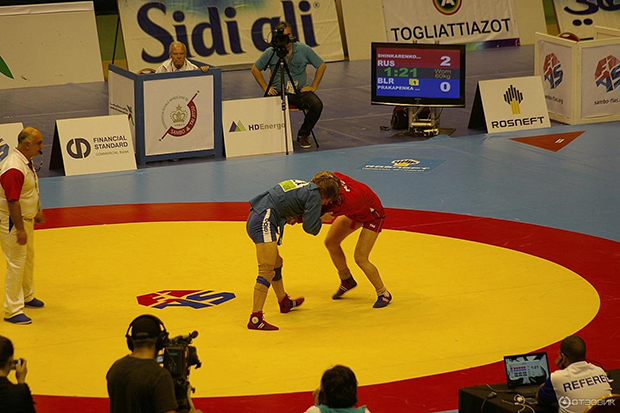 After a few fights, the award ceremony for the winners took place. 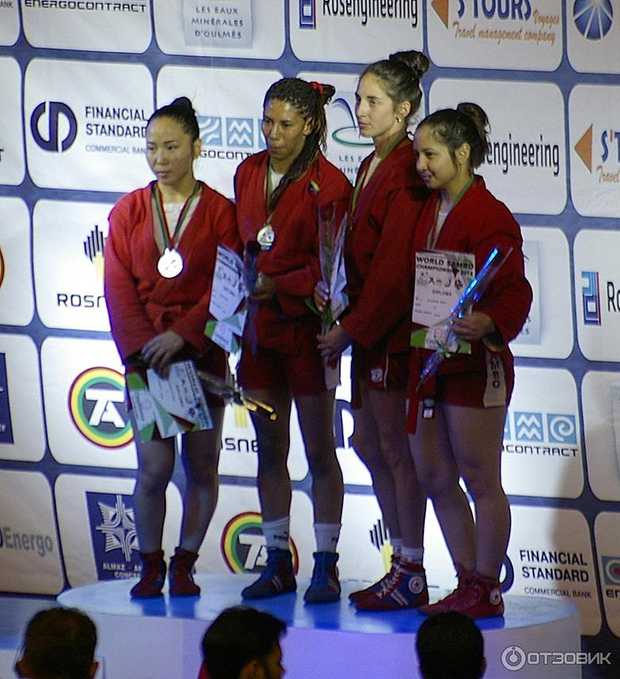 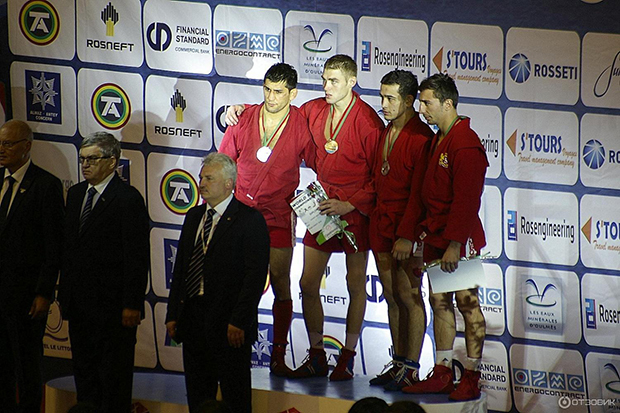 It is a pity that my camera battery ran out before the end, but it couldn't survive such an abundant photo shoot. I can only say that the Russian national anthem sounded as the anthem of the winner more often than for others, and that says a lot! I was proud, although I personally have nothing to do with sambo:) But it was a spectacular and memorable event in my life that I won't be able to forget!

General impressions: What a joy to witness such an event!