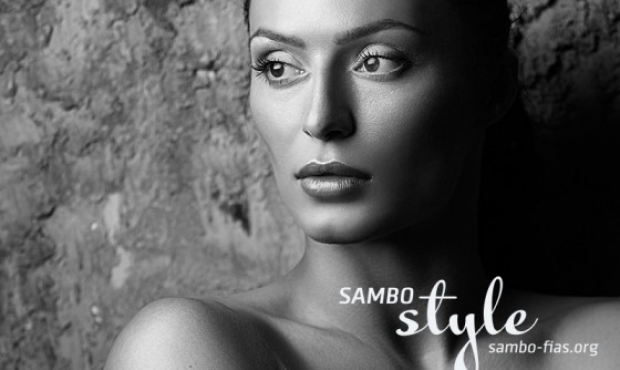 Today there is an opening of a new column Sambo Style. We want to show that female SAMBO athletes are not only the strength and agility on the wrestling mat, but also femininity as well as grace outside the sports arena. And if before athletes’ photo shoots took place mostly on the victory podium, now we are going to show them to you in a somewhat different perspective. Yana Kostenko, the Russian SAMBO athlete, opens a new column. Being the 2012 World Champion, she gained hearts of thousands of fans and millions of television viewers during the 2013 Universiade in Kazan. To begin with, we organised a photo shoot with Yana, and then also talked with her. The result is in front of you.

– Yana, I congratulate you on the photo shoot. What is more difficult for you: to fight on SAMBO mat or sit for the camera?

– I think it’s always a two-edged sword – every profession has its benefits and drawbacks. I can’t say that models don’t strain physically – they strain a lot, because sometimes it is necessary to keep a toe tight, sometimes to hold a back... Of course, athletes have more muscle loading, but these are different things. You fight, derive pleasure, show that you’re the best on the mat. As for the model business it is difficult to prove objectively that you’re the best. 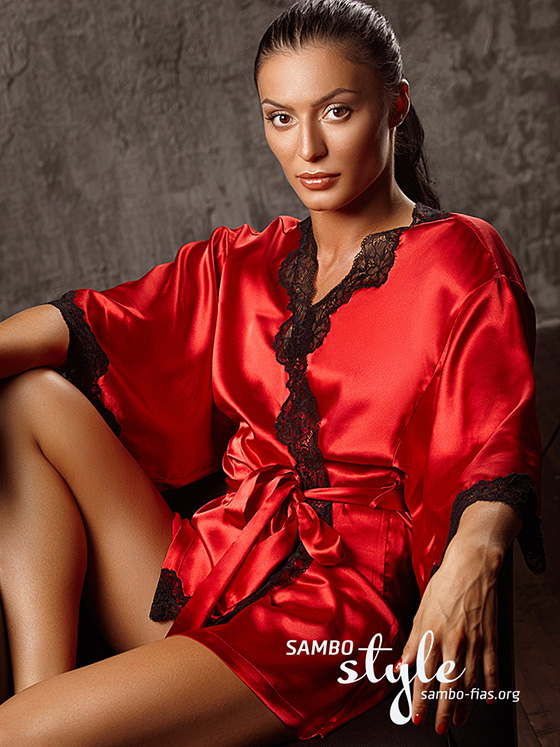 – But this is not your first photo shoot...

– Yes, I have some experience there. I have been photographed for a portfolio twice, I also have an experience of photo shoots for glossy magazines in Vladivostok and Moscow, as well as a stylish photo shoot in the fitness gym. Besides I have recently taken part in a photo shoot for the beauty salon – and has become the face of this salon in Vladivostok. In general, yes – I should be thankful for numerous photos in personal files.

– Then please tell our readers how you’ve gone past the modeling agency and got in SAMBO?

– It happened at a very early age, I began to practice SAMBO when I was four. My mother sent me to the section, and when I was five, I was fighting. I have commendations in weight categories of 24 kg, 25 kg and 26 kg. By the way, just at that time my first photo shoots took place. I showed good results, and short articles with my photos were published in newspapers.

– Why SAMBO was singled out in particular?

– I had a coach Andrey Ivanovich Bugaev, a good friend of my mother. At that time he recruited a group, and my mother got arm-in-arm. I began to go in for gymnastics at him – I was completely stretched: I still have a knack for doing splits and flick-flacks (it is such kind of somersaults) well. And then he began to show us various holds. A thigh blocking turn was my first throw. Imagine, I practiced the same hold for three years every day. So when I was five, I began to fight – my very first competitions were among boys. 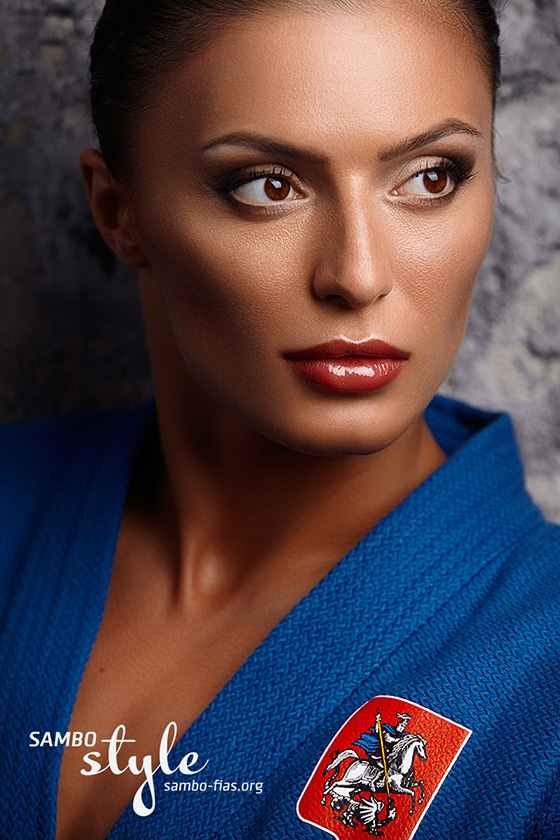 – Did guys have a lot to bear from you?

– When I won boys, they seemed particularly upset. They were not very happy that a girl worsted them. There were such competitions in the city of Nakhodka – the Territory Championship, where girls hadn’t usually performed. I kept the video from the local news: there were 40 people, among whom I was the only girl. One of my rivals is still performing at a good level and at every opportunity recalls how we fought before.

– So does it mean that you were a tomboy as a child was?

– No, I would not say so. I did not have a childhood in the street: I studied in gymnasia, then went to the gym, where were both girls and boys. And my mother sent me to my grandmother to the village for summer where I played with dolls with girls.

I think all girls play with dolls, no matter what sport they practice. When we went to the competitions, I always took a Barbie doll with myself. My coach told my mother: “Your daughter is sitting, playing with Barbie at the competitions and doesn’t even try to follow the competitions. And then I said: “Yana, your turn to fight!”, she comes on and does everything right”. When I came on to fight, my coach told me “a thigh blocking turn” – I do, then “an overhead throw” – I do. Thanks to this I won quietly and continued to play with dolls.

– SAMBO and femininity – how compatible are these notions?

– It’s all compatible. If you initially love heels and skirts, you wear them. On the other hand, when you have two training sessions a day, it all falls away without saying. Only at the weekend and only if you have the desire, you can afford some makeup and smart clothes. Now there are a lot of feminine and pretty girls in our national team. They take care of themselves, make manicure, pedicure. We often hear laterally: “Do you go in for sports? But you’re so cute!”. In fact, more and more very pretty girls are going to SAMBO. 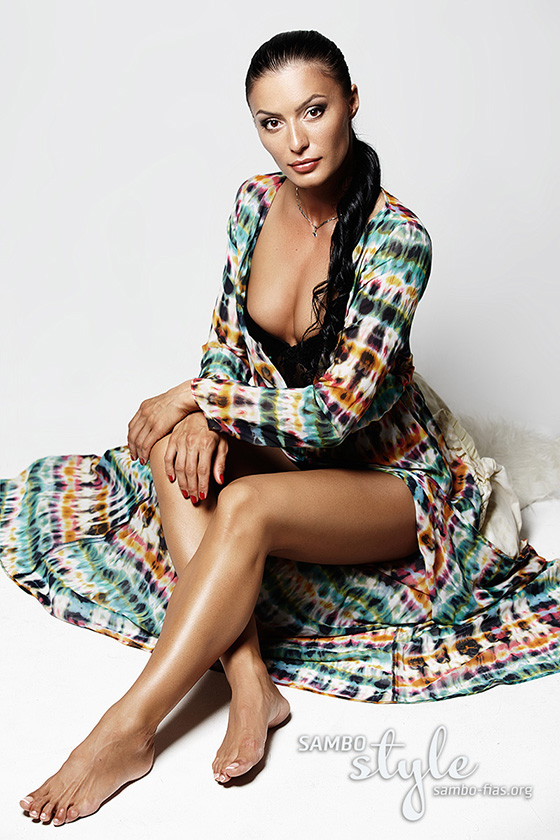 – What’s about bruises and abrasions? Don’t they hinder?

– This is how you set yourself up for. Only complexes hinder all people – this is the only problem. If you don’t have complexes, and you feel good, who cares that you have an abrasion? You will not be loved less because of this. And you won’t fight worse because of this. I love this feeling when I walk down the street, and everyone who sees me, thinks that someone beats me. I find a small advantage in it. Because when they see it on you, they immediately say: “Oh you poor thing, I’d like to take pity on you, give a rap. Who beats you?”. Everybody begins to sorrow for you. 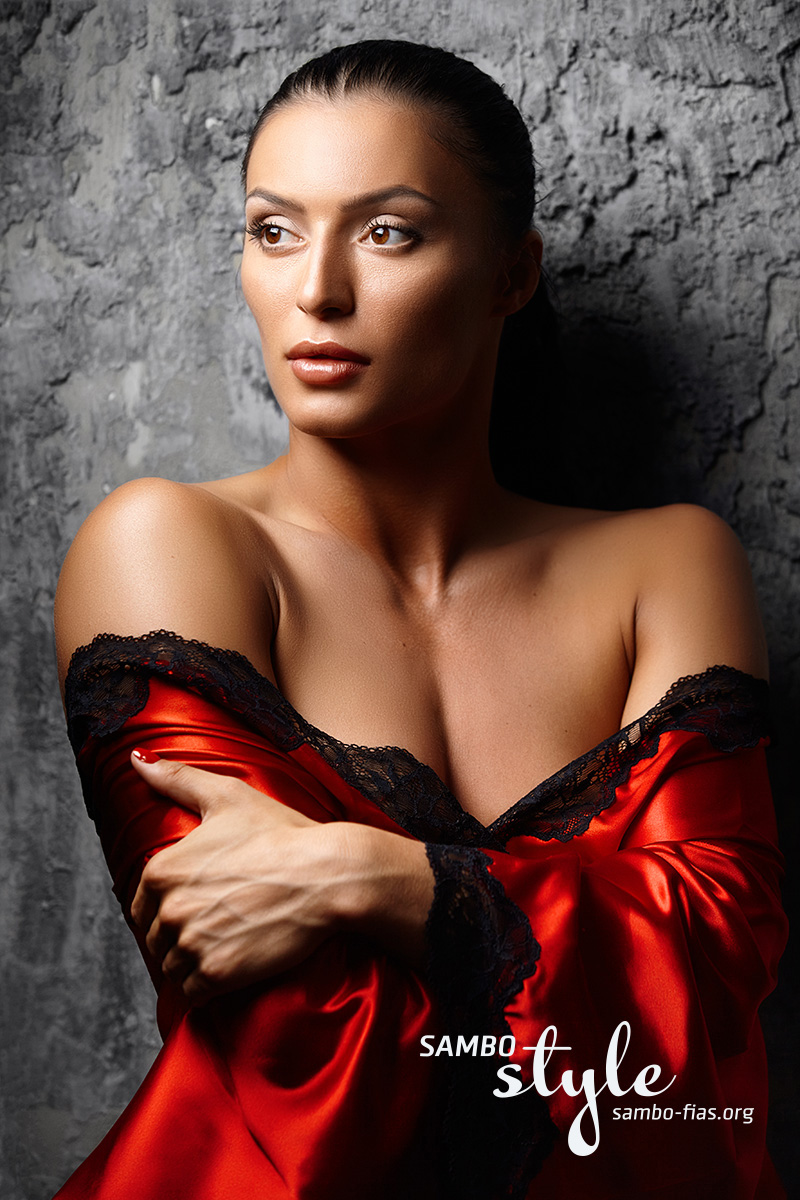 – Do you get acquainted easily?

– Very easily and spontaneous. I can get acquainted for a dare. However, in most cases, I don’t have to do it myself – they get acquainted with me. Recently at the competitions my friend’s acquaintances, cheerleaders came to him. They were standing on the balcony in front of me and all the while I was being watched by them. Then we met, and it turned out that they were professional models. I liked them, and they appreciated my sports figure. In general, they invited to a photo shoot – designers familiar to them created a collection, and I presented it in the end.

– We understand everything concerning girls and how do guys respond when you tell them that practice SAMBO?

– Only inadequate guys respond inadequately. Normal guys behave properly. The majority of people from the outside say: well done. But in general, this is a matter of taste – someone likes me, someone doesn’t like me. 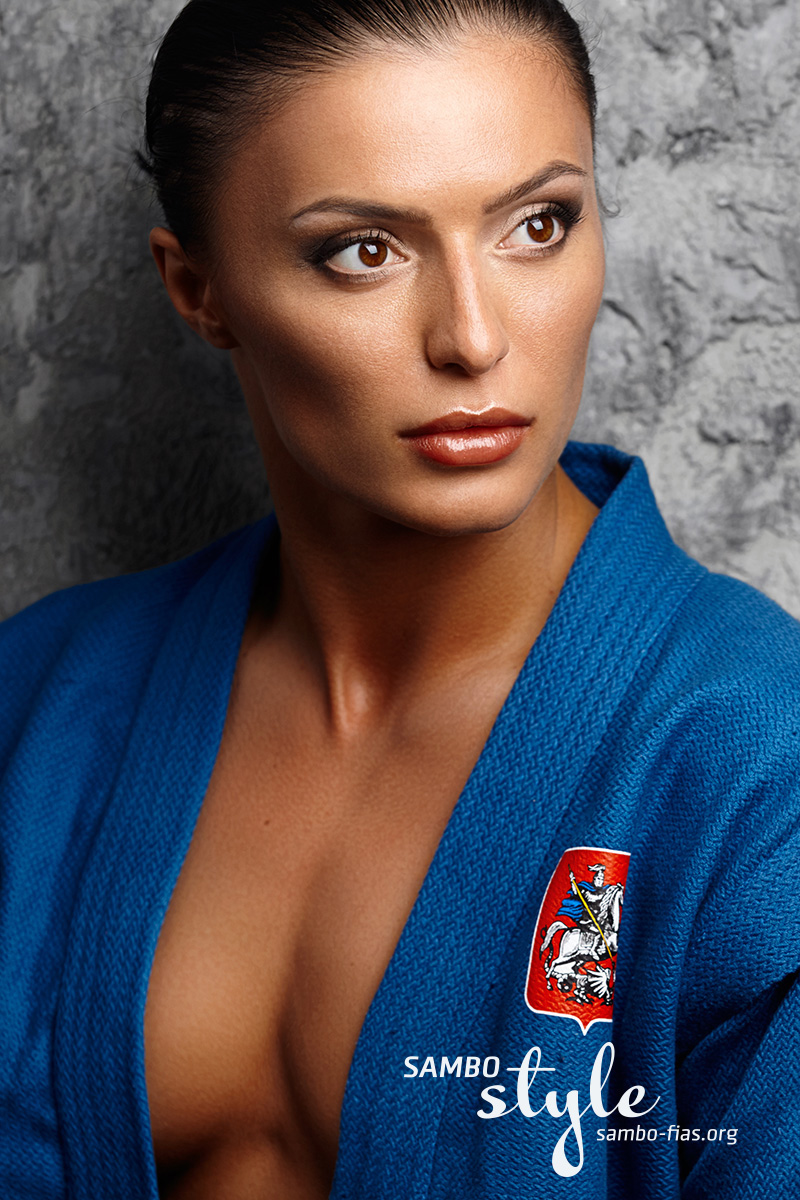 – And have you found someone who likes everything about you and whom you like yourself?

– My prince is still riding somewhere, the horse is completely out of breath. I feel, I will meet him soon.

– My heart should just miss a beat for me to see and understand: mine. Appearance doesn’t play a role, there should be something inside him, plus charisma. I love the sense of humor, I want him to be communicative, understand me. Brutality in a man is a must, I don’t want him to look like a metrosexual. Moreover, I’m afraid to promise, but it shouldn’t be a man of sports. If only a weight-lifter or basketball player. I wish him to be high. I’m not pint-sized, but I want such a man for me to be like a little flower near him. I wish him to be a real pillar of support. Despite the fact that I’m strong, strong-willed and with a tough character, a man must be a man. Said means said.

– Now all the candidates have learned what they should strive for, so in the meantime we will return to the sport. What advances do you consider the most outstanding?

– I want to win the World Championship thrice – it will be my greatest achievement. That’s exactly what I need – pure and simple. The first time – won, the second – confirmed, the third – came to stay! And walked away quietly – to get married, give birth to kiddies, have a photograph taken. 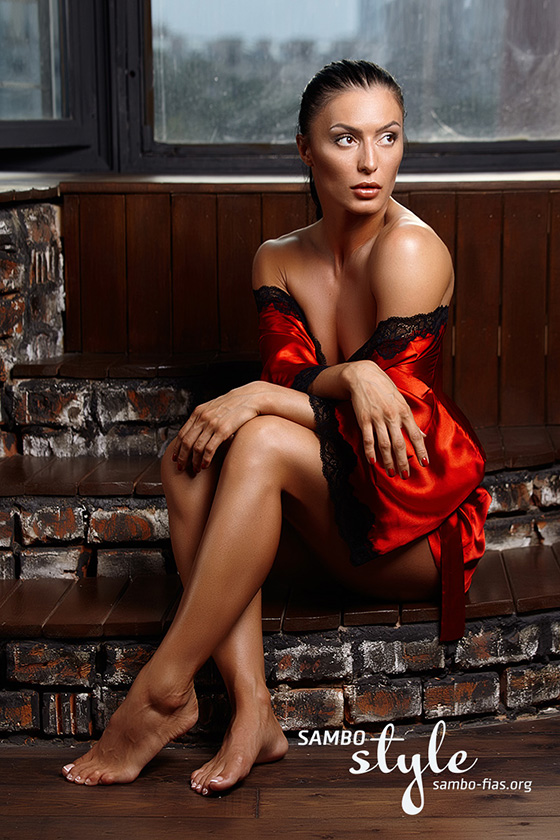 – Haven’t you noticed a star sickness on your own behalf?

– Sometimes people who don’t know me, think that I am arrogant, you can’t approach me for no reason in particular. In fact it is not. I understand that the higher soar, the harder and faster you fall. Plus, they say that the easier you’ll be, the more people will reach out you. But it’s a fine line, which is not always easy to follow. When you won something, the crown begins to drag up the magnet a little. You straighten your back, shoulders and you’re already going in a haughty manner. In such situations, it is necessary to work on yourself, control your inner man.

– Have you had a time when you had to give yourself a dab? 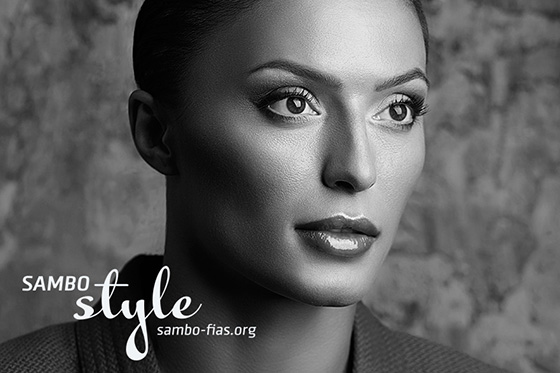 – You moved to the capital of Russia relatively recently. Can you say that Moscow is your city?

– Yes, I get a kick out of it. However, until now I’m very afraid that Moscow can offend me, because the city either accepts you or not. Although my Moscow friends say if the city has already accepted you, it won’t give you up. Moscow cannot deny strong people, and I refer myself to strong-willed and highly motivated people. If I have already gone, stepped on a stage, I should either hold on it, or step up. Naturally, I try to go forward.

I like Moscow, I am glad that it is crawling with a crowd, different people constantly. You have the opportunity to see actors, celebrities, different people – interesting, idiosyncratic, imaginative and creative individuals. I am happy every day, thank God for having woken up. We all should rejoice and appreciate every day.

Now many people are sold on wrong goals and beliefs, people live in disharmony with themselves, and many don’t know what they want out of life. In fact, it is very difficult to find yourself, understand what you want. When I was 23-24, I didn’t know what I wanted. It lasted a year and a half, but then everything fell into place. Now I am in Moscow and I try to move forward every day. 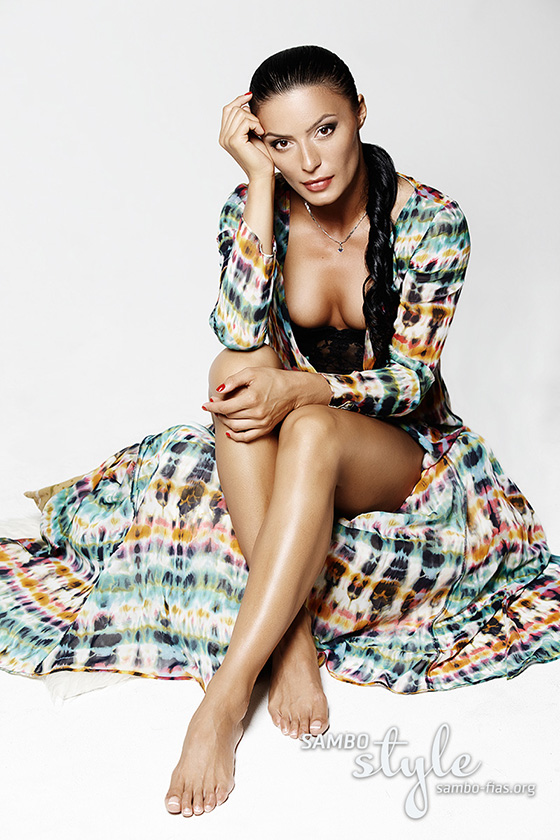 – So, you’re in Moscow, but still without a prince. Where can one meet with you in addition to training sessions and competitions?

– I walk a lot, I walk down the street. I haven’t probably learned the whole city, I love to watch old Moscow. While it hasn’t fully taken down yet, it is necessary to have time to watch. However, it seems to me, I’ve never acquainted in the street. Once a man tried to get acquainted with me at the traffic lights. I walked down the street, and saw a man smiling me out of the car. I smiled him in return. He stopped the car at the traffic lights, went out, wanted to get acquainted with me. I said sorry, but no. Why? I don’t know – I’m guided by my intuition. Besides, street makes me feel doubting or confused.

But in general, I should say to everybody: I saw my man in a dream many years ago. So I know exactly what he looks like. 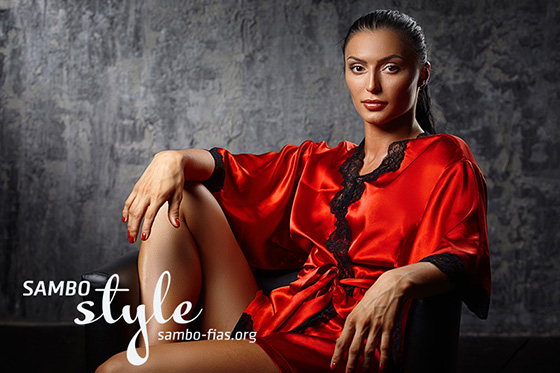