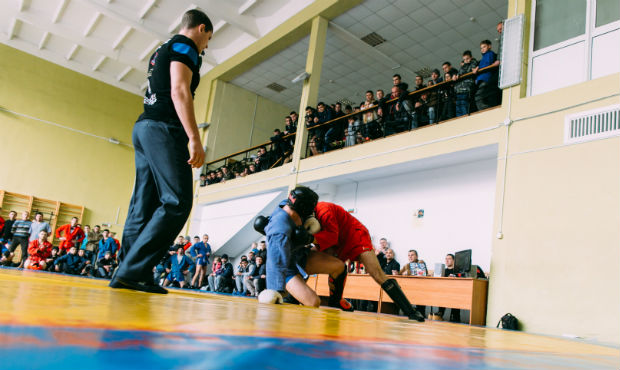 On October 19, Combat Sambo Open Championship among Amateurs first ever took place in Minsk. More than 50 samboists participated in this tournament. Beside the athletes of Belarus, athletes from Russia, Ukraine, Azerbaijan and Tajikistan took part in this tournament as well.

Alexander Voronovich, Deputy Chairman of the Combat Sambo and MMA Federation and international master of sport, greeted all the sambo wrestlers with his speech while solemn tournament opening ceremony.

“Combat Sambo Open Championship among Amateurs in Belarus is organized for those who are only at the beginning of the road in combat sambo or who want to challenge themselves in a sport fight. Only young samboists will try themselves in this competition”, said Alexander Voronovich.

During more than 5 hours, the competitors were finding out who is the best in different weight categories. The competition took place in Minsk, in Children's and Youth Sports School of Olympic Reserve for wrestling. According to www.fight-liga.by, this championship was organized in collaboration of the Combat Sambo and MMA Federation and Liga Sport Club.

Sambo wrestlers in four weight categories struggled to be the best. The fights duration was three minutes. The most ‘light’ athlete turned out to be V. Saparniyazov with the weight of 57 kg 300 gr. The most ‘heavy’ athlete became E. Penkin who weighted 124 kg. A. Gasanov was the youngest participant in age of 15, and the most mature athlete was A. Predekha, 44 years old.

Results of 2014 Combat Sambo Open Championship among Amateurs in Belarus can be found here: RESULTS.