5 facts about the World SAMBO Cup in Morocco 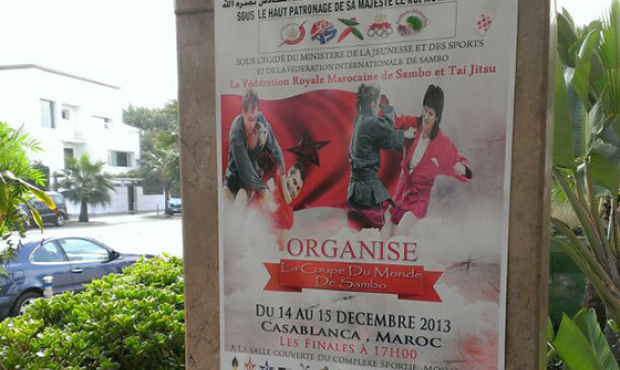 Moroccan Casablanca has become the place where the final point was set at the World SAMBO Cup in 2013. For two days, from 14 to 15 of December, SAMBO athletes from around the world competed not only for victory at the particular tournament, but also for the right to become the best of the year. FIAS website presents you 5 facts about the World SAMBO Cup Stage in Morocco.

1. For the first time in Africa

In 2013 the World SAMBO Cup expanded its borders and established its own flag in Africa for the first time. Morocco has become the country that has received SAMBO athletes from around the world. The most inhabited city in the state – Casablanca – opened its wide embrace and hugged each SAMBO athlete who arrived to show his skills, brotherly. The athletes, in their turn, didn’t only devote themselves to their favorite pursuit, competing on SAMBO mats, but also managed to explore the local attractions. Great Hassan II Mosque is, of course, the chief among them, with the tallest minaret in the world and a gorgeous view of the Atlantic Ocean. Expanding of SAMBO geography is also expanding of SAMBO horizons.

It was originally planned that the final stage of the 2013 World Cup would be held in Morocco in September, but for some reason it was decided to move it to December. From the point of view of temperature conditions, this was, of course, a minus – with a daily average of 22.3 degrees to 14.2. However, the average daily temperature about 18 degrees seems almost perfect to fight in comfortable conditions and show excellent results. From the standpoint of catching up – this was a plus, because all those whom luck showed a grimace instead of a smile, could try to take revenge at the end of the season and approve themselves at a major final tournament of the year. And the blue-eyed boys – to win another title.

3. Victory in overall standings – is a priority

Each SAMBO athlete, who came onto the mat in Casablanca these days, had the current position in the intermediate standings of the World Cup in mind. Of course, nobody likes to lose, but if at the same time you still guarantee the first place in the final rankings thanks to earlier scoring, you can look on the bright side of life. Twists and turns of events in the category up to 82 kilograms among men became particularly interesting from this point of view. Sergey Ryabov and Andrey Perepelyuk qualified for the finals in Morocco. However Perepelyuk was injured and was withdrawn from the competitions by a doctor. Thus, Sergey Ryabov became the winner of the African Open Championship. While another Russian Vladimir Prikazchikov took the third place of the Moroccan World Cup Stage. But Andrey Perepelyuk got pre-term victory in the overall rankings of the World Cup on the basis of all stages, Prikazchikov is on the second line, Ryabov – on the third.

Of course, it can’t be compared with the World Cup, and there is no need to do it. However, participation of national teams from 11 countries at the African World Cup can be considered a success. Teams from 11 countries – Russia, Belarus, Japan, Korea, Tajikistan, Cameroon, Morocco, Algeria, Nigeria and others – participated in the competitions. Of course, the representatives of Russia and other former Soviet countries are still the main favorites, but the stubborn resistance of the countries where SAMBO has only recently begun to develop, gives evidence of the emergence of serious competition in the world. And attention of the King of Morocco Mohammed VI to the competitions gives evidence of the fact that SAMBO in Africa is gaining in weight.

One can talk about the World Cup Stage in Morocco long and enthusiastically, but all the fans and athletes are certainly eager to learn the final results of the tournament. We would like to bring them to your attention.