SAMBO at the Arnold Schwarzenegger’s Festival 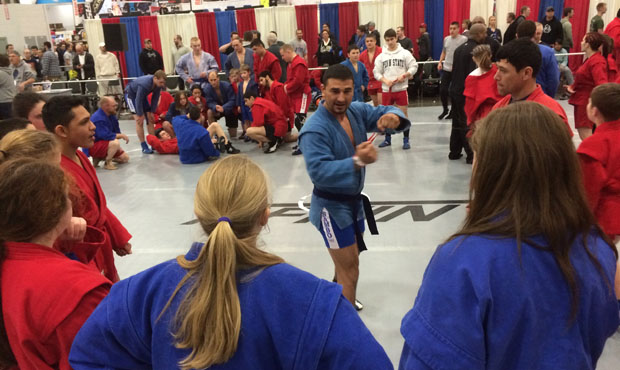 The largest U.S. multi-sport festival - Arnold Sport Festival - was held in Columbus, Ohio, from February 27 to March 2. Its programme includes 50 most spectacular sports, according to the organisers. SAMBO is among them for two consecutive years.

More than 18,000 participating athletes, hundreds of thousands spectators, hotels overcrowded in this connection and the exciting action where Arnold Schwarzenegger was personally present and even accompanied by Jason Statham – the scale of the event was really striking. SAMBO athletes’ performances at the Arnold Sport Festival were held on March 1. 100 SAMBO athletes from various US sports clubs participated in the Tournament.

– This event has a great potential. The presence and assistance of such iconic person as Arnold Schwarzenegger gives a powerful impetus to the rise of SAMBO popularity, comments on Michail Kozitsky, First Vice-President of USA Sambo Inc. – It is possible that in the future, if we manage to enlist the FIAS support in this matter, we will be also able to organise an international Tournament within the international Arnold Sport Festival. It is the largest multi-sport festival in the country, and many Americans will have the opportunity to learn more about SAMBO thanks to this smart interaction between the two worlds – the world of sports and the world of show business.