The European SAMBO Championship in Bucharest: The Most Important Just Before The Start 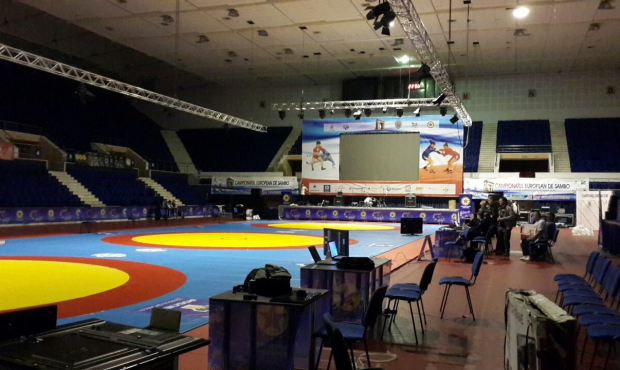 The most populated city of the South-Eastern Europe, “Little Paris” and the main city of Romania – Bucharest is hosting European sambo these sunny May days. The name of Bucharest origins from the Romanian word “bucurie”, which means joy, and the main symbol of the city is the Palace of Parliament. It is this city, which is ranked as the second in the list of the largest architectural buildings of the world after the Pentagon. All participants of the main start of the year in the European sambo will be able to see this Palace as well as many other places of interest of the city during the excursion, which the Romanian Sambo Federation organised for the guests of the Old World Championship. But this will come later, and today, on May 15, the European Championship has started with its daily routine.

Athletes, coaches and official persons were accredited, some sambo athletes had to “adjust” their weight and train. It was easy to do this: the organisers had thought everything through so that the athletes did not consume their spare energies, and a sambo mat was laid right on the first floor of Grand Rin Hotel, which is meeting the guests of the Championship these days.

While the sambo athletes “tuned up” the body and spirit by means of a warm-up, the official persons of the sambo Europe have held the next Congress of the European Sambo Federation (ESF) right here, at the conference hall. The agenda included issues typical of such events - report on the work done for the previous 2013 year, as well as a discussion of the state of affairs for promotion and development of sambo both in Europe and the world.

One can also emphasise several organisational adjustments, which were adopted by the today’s Congress in Bucharest. For the destructive activities contributing to hurting of the image of sambo in the world Dmitry Stoyanov, Dmitry Samoshchuk and Eduardas Rudas were expelled from the ranks of the Executive Committee, the main body of ESF. Also, new members of the Executive Committee were elected, those were Vsevolod Zeleny, President of the Latvian Sambo Federation, as well as the head of the Spain Sambo Federation, Anjel Lopes Rojo. Minor reshuffles of the ESF management took place as well. Pursuant to the Resolution of the Congress, Roberto Ferraris was released from the occupied position of the General Secretary of ESF in advance (due to work load, connected with the similar position, occupied by him at FIAS), who was replaced by Rumen Stoilov on this post.

Due to the change of the status of several federations being ESF members, they have been expelled and admitted as members of the European Sambo Federation again at the Congress today. This situation also concerned Sambo Federations of Turkey, Italy, and the Czech Republic. Sambo Federation of Macedonia has become a new member of ESF. It is worthy of note that the newly admitted federation is already participating in the championship, which starts tomorrow, the athletes of this country will fight for the medals of the European sambo tournament.

The delegates of the Congress have also discussed a calendar of European sambo athletes for 2015-2017. Next year the capitals of sambo in Europe will be Austria, which will host a cadet championship, Serbian Novi Sad, a youth tournament will take place there, while Croatian Zagreb will meet adult sambo athletes traditionally in the middle of May. In 2016 the European Sambo Championship will take place in Russian Kazan, while the youth will fight for sambo medals in the French capital of Fashion. In 2017 Czech Prague and Turkey will meet European sambo tournaments, however, the hosting country of the cadet European competition, which is held once in two years, is still unknown.

Also, a decision has been made to start holding the European Cup in Sambo next 2015 year. The Congress has brought up a proposal for discussion that this event would be held in the framework of the traditional tournament in Madrid, “Memorial Santiago Morales”, which will get a new, prestigious status in September of 2015. The format of the tournament, which will probably envisage participation of 2 athletes in the weight category from each team, will be adopted by the next meeting of the ESF Executive Committee.

That was the “official part” of today, and starting from tomorrow, we will be watching for the next three days a sports part filled, as always, with a bright, beautiful and uncompromised fighting. You will be able to see it on the official website of the International Sambo Federation at www.sambo.sport. The direct broadcasting will start at 10 am (Romanian time). Do not be late!