Demonstration of sambo in a shopping center of Nicaragua: new trend gains momentum 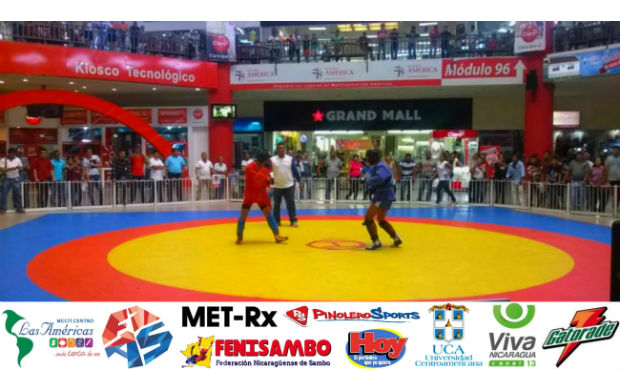 In September, sambo saw to a new trend: formerly the competitions in this type of combat were held in sport complexes, but now the shopping centers become a new arena for sambo athletes. FIAS website has already made a report about the President’s Cup that took place in Great Britain on September 27 in one of the largest shopping malls called Bluewater. However, not everybody knows about an event held 2 days later in a shopping center of Nicaragua. And today we will set this right.

On September 29, the Federation of Sambo of Nicaragua organized and successfully held a demonstrative tournament in combat sambo. During several hours an exciting and unconventional for this city show was going on in the central part of the shopping mall Las Americas which is the most popular shopping center in Managua. About 25 sportsmen from different schools and academies being members of the Sambo Associations of Managua, Granada and Carazo made their exhibition performances showing sambo combats not yet known to everyone, but still trending in the country.

During breaks in between the sambo performances, the stage was occupied by rappers from Carazo and animators with musical accompaniment. The audience was also happy to see athletes from sambo schools of Central American University of Nicaragua and Sandino. Demonstration of their techniques and acrobatic feats received a tumultuous applause from the audience.

Despite the fact that the spectator seats were not provisioned, the audience gathered on several floors along the perimeter of the combat ground. As per organizers’ estimates, the tournament was viewed by around 1,000 people. The organizing committee did not stop there and posted the video taken at the demonstration on the Internet where it rapidly started to get viewings. Here is this short movie brought to your attention.

The traditional mass media were not left behind as well. The information concerning the tournament popped up in TV news, printed media and on specialized sports sites.

“The principal goal of this event was to develop and rehearse a new attractive format of conducting presentations and tournaments. Realization of such events in public places allows for attracting attention of population and sponsors to sambo,” says the President of the Federation of Sambo of Nicaragua Carlos Perez. “In spite of a huge number of legal difficulties that interfere with our development as an independent organization, sambo demonstration in a shopping center helped us to attract the first sponsors.”

In this regard, Carlos Perez notes the enthusiasm and professionalism of young managers of the Federation of Sambo, Sayra Laguna and João Maldonado, together with the Sport Coordinator of the Central American University Amaru Canales, who have all been working with the sponsors. “And we believe in a real possibility to conduct the next national championships according to this system,” adds Carlos Perez.

“I would like to say thank you to our brothers from the combat federation who have lent us a mat for battling. I send many thanks to the President of the International Federation of Sambo Vasily Shestakov for the sambo uniform given to us as a present and which we currently use, and also for sending Tigran Karkhanyan and Vladimir Dutov on a business trip here, all of which would not have been possible without the help of FIAS Development Director Andrey Moshanov,” Carlos Perez returns his thanks for the help.

Summarizing the past event, the President of the Federation of Sambo of Nicaragua emphasizes: “Our Federation demonstrates that the help provided to us is used to the fullest, and we are ready to organize more and more important and large-scale events. We strive for hosting the next Pan-American Championship in 2015 and assure our readiness to do so.”