The Victory Day on the legendary British cruiser Belfast 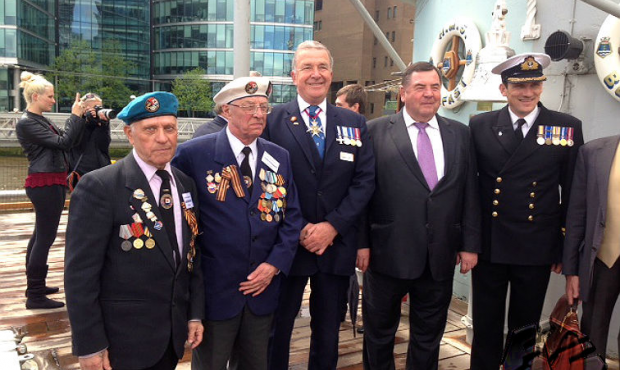 The visit of the International SAMBO Federation President Vasily Shestakov to the UK wasn’t limited only by the Order of Liberty of London conferment. On May 9, the Victory Day, Vasily Shestakov came on board of the legendary cruiser Belfast. What happened there and how it was – in our today’s report.

For about 30 years the ship museum Belfast has permanently ridden the anchor on the River Thames in the center of London, one of the most famous and popular tourists’ sightseeing – opposite the Tower of London and the famous Tower Bridge. In due course time Belfast was one of the most powerful light cruisers in the history of the British naval services. Today, it is the only surviving ship of this type, which took an active part in the Second World War. The Cruiser Belfast served as a covering ship for a group of transport ships of the Arctic convoy (the famous novel by V. Pikul “Convoy PQ-17”) and travelled a heroic way from Murmansk to Canada and back more than 20 times, heroically repulsing the German submarines attacks.

According to one of the Russian veterans, the aid brought to Russia by this convoy, helped to save a great number of soldiers lives and gain time – a minimum of one and a half year for the expansion of Soviet military industry in the Urals.

Having been the servant of Britain for 32 years, Belfast played an important role not only in the Second World War, but also in the Korean War, carrying out a peace-support mission during the 50-60-ies of the last century. Saved from the disposal and splicing in 1971, Belfast has become an important and interesting part of the Imperial War Museum.

The Victory Day gathered together more than 100 Russian and British veterans of the Arctic convoy on board of the 9-deck cruiser. The Britain’s Prince Michael of Kent congratulated the invited veterans of the Great Patriotic War to the Victory Day and read a personal message of the Queen Elizabeth II, in which it was stated that during the Second World War the Russians and the British fought shoulder to shoulder to share the laurels of the winners on the Victory Day.

“This holiday is a reminder of the greatest contributions of the Russian and British troops in our common Victory, – quoted the Queen her cousin. – I would like to convey my warmest congratulations to the Russian veterans who came to London, as well as their British comrades. You – are the winners, and you meet together this historic date”.

During the state reception on the cruiser Aleksandr Yakovenko, the Russian Ambassador in the UK, Vasily Shestakov, the President of the International SAMBO Federation, Deputy of the State Duma of Russia, Lord Alan West – the former Commander-in-Chief of the United Kingdom naval forces (2002-2006), Simon Hughes, Member of Parliament of the Kingdom on behalf of the Liberal Democratic Party, and a number of partners and sponsors of the event made a speech.

Vasily Shestakov said in his speech: “Today is a great day – the day of memory and commemoration, but also the day of warning. The warning to all of us – living now that the war lesson is always with us. We must always remember it and prevent the recurrence of military disasters. Eternal glory to those passed this war. And the eternal memory to those fallen in this war”.

“What do you remember on the London Victory day?” – we asked the International SAMBO Federation President.

According to Vasily Shestakov: “I was deeply moved, to be in such a unique place on the legendary date –it is a great honor and responsibility for me. It was nice to talk to veterans. They – are our guarantors of the truth about the war. That truth, which should not be distorted by modern political and public figures in favor of any interests. So I find that such meetings – are a must for us, the imperative that we urgently need now to implement the continuity of generations. Such continuity helps to instill patriotism, right moral guides and correct position in life in the younger generation”.

“On this day I also was able to talk to Prince Michael of Kent and Aleksandr Yakovenko on the SAMBO prospects in the world and, in particular, in the countries of the British Commonwealth, – continues the International SAMBO Federation President. – Sport has always been an ambassador of peace, and SAMBO, except of carrying a sports component and a serious social burden, is of great demand in the world today. In the world where values of tolerance and social responsibility take the central stage. This is what we were discussing, speaking about the development and promotion of SAMBO in the world”.

Here is the event that took place on the legendary cruiser Belfast on May 9, and this official ceremony on the banks of the Thames ended by a moment of silence and gun salute.

Eternal memory to all who fought in that war!