Participants of the XXV FIAS Congress are speaking 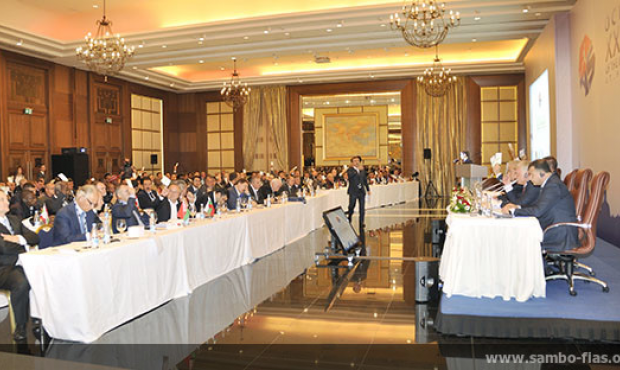 The XXV Congress of the International SAMBO Federation in St. Petersburg has already become a part of history. Members and guests of the event went home to share impressions with their colleagues, friends and loved ones. And some of them brought out their own opinions on the Congress in an interview to the FIAS website. We would like to bring them to your attention.

Martin Clark, the President of the British SAMBO Federation:

“90 countries were represented at the XXV FIAS Congress in St. Petersburg. When our British SAMBO Federation began its activity in 1996, there were only 20 countries, developing SAMBO. During this time not only the number of states has increased. Standards of the competitions organization got really high. As for the Congress, it is perfectly organized. I didn’t agree with all the decisions, but this is democracy. I got my view across to all members of the Congress, but that doesn’t mean that they all have to agree. Ultimately, the decision is taken by the majority.

If we talk about how SAMBO developed earlier, not much was done for the development of our sport. However, with the advent of Vasily Shestakov everything has changed significantly. The national federations are supported by the FIAS, seminars for training coaches are conducted, our athletes participate in the international tournaments, which are organized at the highest level. Very soon we will participate in the 2013 World Cup, which will be held in St. Petersburg. I remember how this Tournament was organized 5 years ago in this city – it was really gorgeous. I think, this time we will also see something amazing”.

Monique Athanase, the President of the Seychelles SAMBO Federation:

“I am happy and proud that I’ll be able to represent the African continent at the FIAS Executive Committee: all the African countries are behind my back, and I will try to live up to their expectations. Of course, there is hard work ahead of me and all of us, but this work, I’m sure, will be effective.

It’s the first time I have been to the Congress of the International SAMBO Federation, before that I had an experience of the similar events in judo. I’d like to say that the organization is just wonderful, but the main thing is the number of federations participating. They showed the scale of SAMBO development in the world: it was clearly seen that SAMBO is such a big world family. And I also liked the general mood of all the participants very much – friendly and inspiring to work. I have a lot of positive emotions and impressions from the debut of the Seychelles in the work of the main governing body of the FIAS”.

Joseph Barth, the President of the German SAMBO Federation:

“The German SAMBO Federation is one of the most fast-growing sports federations in the country. In 2001, when we took part in the World SAMBO Championship in Krasnoyarsk for the first time, in Germany nobody knew about SAMBO. Today land federations function in 12 out of 16 Lands (regions). Over the years, more than 5000 athletes have got acquainted with SAMBO, and we are the largest in number SAMBO Federation in Western Europe.

One of the main objectives of SAMBO in Germany is to help young migrants to integrate into the German society. Also, I want to show the native-born youth what a wonderful sport SAMBO is. A lot of young people break up at the difficulties of life and demonstrational attractiveness of the street. We provide facilities for mass sports activities – and someone of guys who comes to practice just “for himself/herself”, in the end decides to dedicate his life to the sport and performs at the international tournaments”.

Svetlana Neubauer-Sokolik, the President of the Austrian SAMBO Federation:

“Of course, I expected that I would be nominated for election to the FIAS Executive Committee, after all I have been working in full view of everybody for so many years. In principle, I have been ready for such an important job long ago, but it’s very good that this decision has been taken now. All of us had the time to get a sense, understand what is happening in SAMBO, where and with whom to move.

I can say that I already have the first proposals which I want to bring up for discussion of the Executive Committee: it is the ability to support national federations at the national championships. At home I started from scratch, we had nothing. Now we have 4 SAMBO clubs, tournaments are regularly held, we cultivate love for SAMBO in children from an early age. Regarding the work at the Executive Committee, I have been a member of the Executive Committee of the European SAMBO Federation for 2 years already. I think, it is easier with men than with women. Especially here in SAMBO – where actually real men are gathered!”

“We’re looking forward to the next year, for which SAMBO Cup of the Russian President is scheduled in Great Britain. We hope that Vladimir Putin, the Russian President, and David Cameron, the British Prime Minister, will be able to attend the event. It will help to get off on the right foot and strengthen relationships between the two countries and further develop our partnership.

I’d like note that SAMBO athletes “have already come to light” in London. This happened at the state reception at Kensington Palace dedicated to the 75th anniversary of SAMBO in June this year. And the event found public response, because members of the Royal Family, Michael of Kent, Alexander Yakovenko, the Russian Ambassador to the UK took part in it. The Russians’ exhibition performances in tuxedos on the lawn outside the Palace will be discussed in the British sports sidelines for a long time.”

Antonio Ramirez, the President of SAMBO and Combat SAMBO Association of the State of Guerrero of Mexico:

“I liked the Congress, it was special. I saw people, representatives of 90 countries – that’s great. But I saw not only a large number of delegates, what is more important, I saw the unanimous decisions. This suggests that now we are truly a union, and if it the union - so we are very strong. I saw it with my own eyes while voting, which took place at the time of the Congress: there were hardly delegates who voted “no”. The neutral – yes, there were, but there were almost always unanimous decisions.

I think this shows that Vasily Shestakov, the FIAS President and his team are working properly. The course taken now by the International SAMBO Federation, is correct. I think this Congress has rallied us even more. If I had to characterize this Congress in just three words, I would have said: “Friendship! Unanimity! Union”.