How SAMBO Becomes An Engine Of Innovations In Ukrainian Educational System 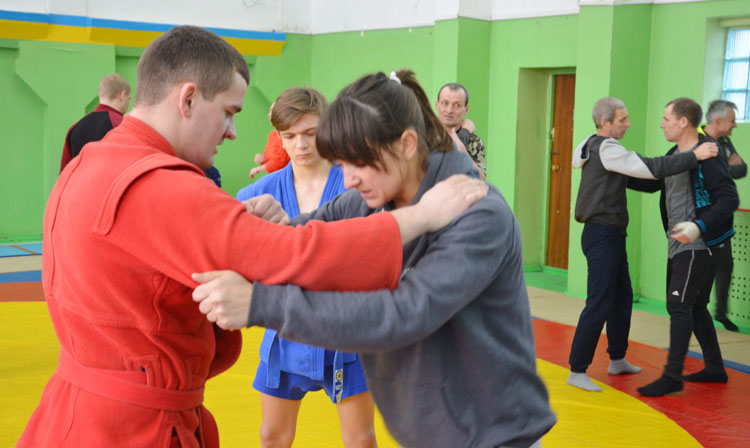 The ‘SAMBO To Each And Every School’ program gains momentum in Ukraine, with more than 50 Ukrainian schools participating in it at present. In the framework of the project, the national educational system employees attend seminars arranged in various parts of the country by the National SAMBO Federation of Ukraine (NFSU). On February 21-22, the next scheduled classes in theory and practice of SAMBO were given to PT instructors in Kyiv.

The event attracted about a hundred participants not only from the country’s capital and its central regions but also from its Southern and Eastern parts. The Kiev professional college with advanced military and physical training curriculum that had also joined the program provided the venue for the practical seminar.

Its organizers remark that the practical part of the course aroused the keenest interest. It was opened by a demonstration performance of sambists and coaches from the capital. The athletes were saying jokingly that the school students had given a lesson to their teachers. 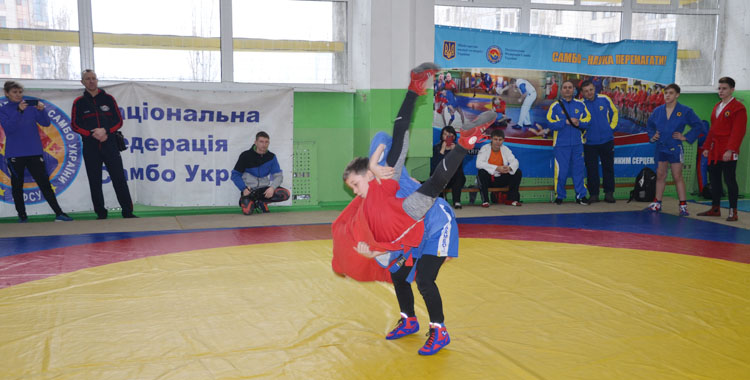 Later on, the participants began to work through the elements of a sambist’s training which included limbering up, exercises in safe falling, practice on dummies, resistance band exercises, and the most popular one, throws. All these elements are detailed in the instructional program of the project. 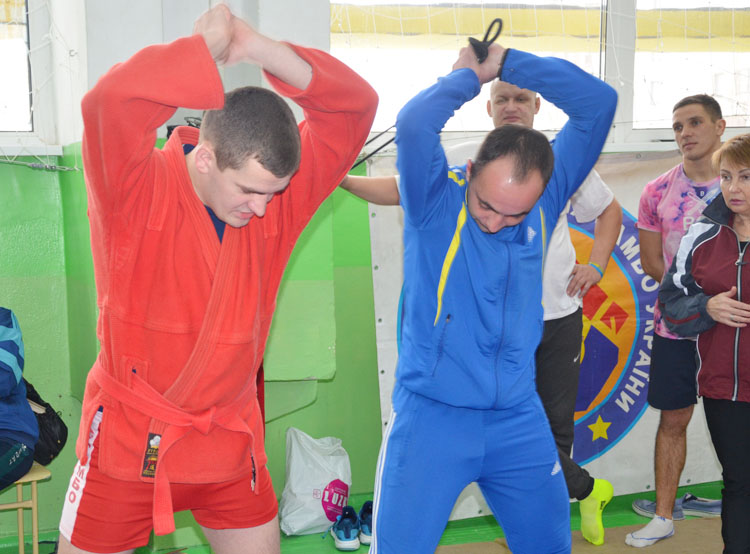 – The main thing here is that we’ve witnessed strong interest shown, that is to say, by the most important people in this whole arrangement, the PT instructors, – says Vadim Rogach, President of the National SAMBO Federation of Ukraine. – Yes, we’ve got “green light” from the pertinent ministries, those of education and sports, yet you can do practically nothing if those who work directly with children are unwilling to cooperate. 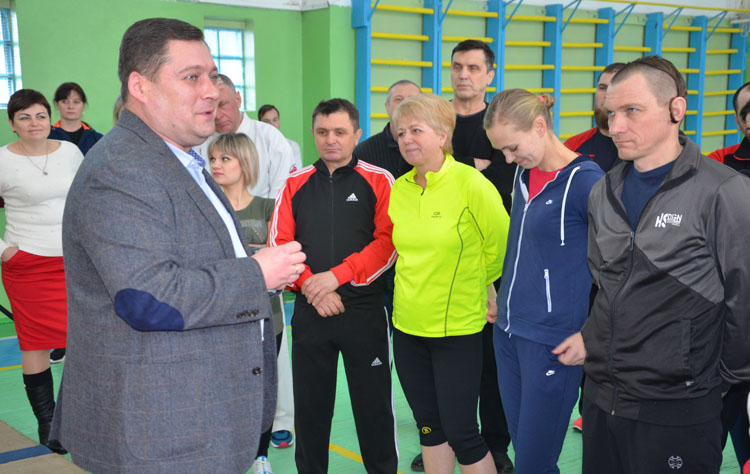 He also remarked that some experts take the initiative and plead with sambists to carry out a seminar in their region. That’s what occurred in January in Kamyanka, Kakhovsky Region, Kherson Oblast.

– A school PT instructor Elena Shanina addressed the regional SAMBO federation that provided instructors. And in January a full-scope seminar was held in that small settlement attended, among others, by the chief supervisor of the program, a research fellow of the Institute of Modernization of Educational Content Galina Kolomoets, – said the NFSU President.

According to him, SAMBO is now called an engine of innovations. There is an understanding in the NFSU that modern children should rather be enthused with their PT classes, not bored. That’s why three other sports had been coupled to the ‘train of innovations’: petanque, frisbee, and cheer-leading. Together with SAMBO, they formed an integrated module of an interdisciplinary PT lesson. 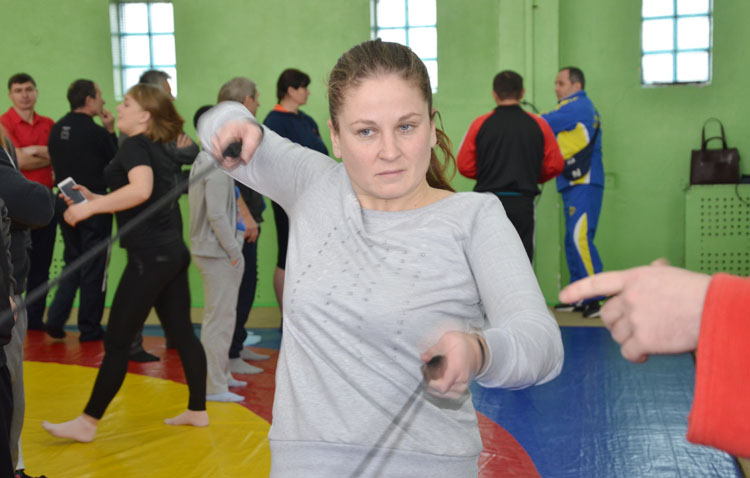 – I’ve told this already, yet I wish to say this again: we`ve realized, that not every child in a class would be willing or able to do sambist’s exercises, due to their health condition – carries on Rogach. – So we have found new interesting sports that would embrace even kids with health limitations. The main goal of all those people working in the sphere of sports is to instill a physically active lifestyle in school children who might then choose to become sambists, gymnasts, basketball or football players, at their own discretion.

Vadim Rogach emphasized that the NFSU is one of the leading participants of the «JuniorZ» TV project by a popular Ukrainian TV host Alexander Pedan, the gist of which is to involve today’s computer ‘generation Z’ kids into physical activities, to show that to be strong and dexterous is fashionable.

– This project is aimed at ‘customization’ of the PT classes system which only agrees with our own objectives, – claimed the NFSU President. 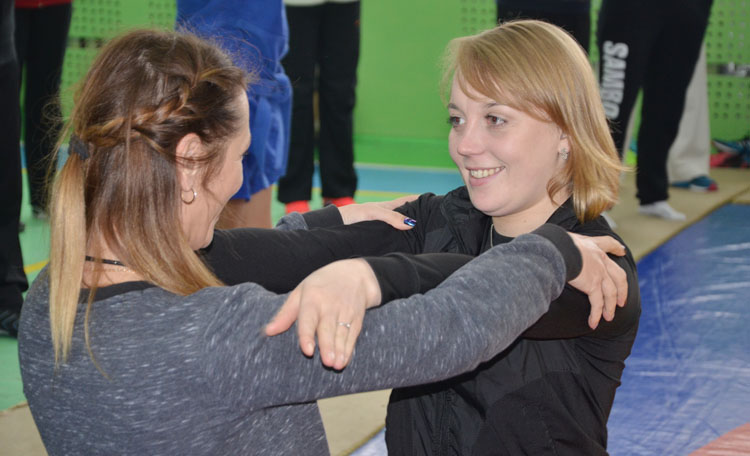 By the end of this year, in the framework of the ‘SAMBO To Each And Every School’ program, it is planned to provide more than 200 schools located in various regions of Ukraine with all the necessary equipment, such as mats, dummies, uniform, and instructional materials.

– These educational establishments have already submitted their forms. A link to the registration form has been posted on the Federation’s website since last autumn, – explains the NFSU President. – Now, they are all waiting for their turn, for, as you can guess, a mat is made not in a day. Of course, when supplying schools with the equipment we leave supervisory rights to ourselves. Because we are running this project not for statistical reports but to make it truly functional.