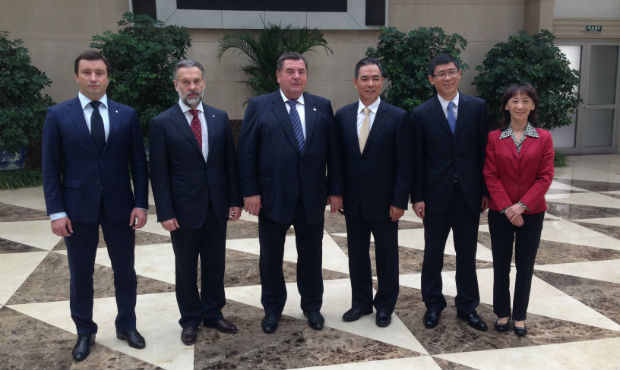 The meeting between the executives of the International Sambo Federation headed by FIAS President Vasily Shestakov with the executives of China State General Administration of Sports, headed by its Deputy Director, the Vice-President of the National Olympic Committee of China, Cai Zhenhua, took place in Beijing. The main outcome of the meeting is the intention of the Chinese side to fully explore Sambo and their commitment to active development of this sport in the country. FIAS, in its turn, is ready to provide its full support and experienced professionals to train Chinese athletes.

FIAS President Vasily Shestakov during his talk to the Deputy Director of China State General Administration of Sports, Cai Zhenhua, said: "We are pleased to help and provide our coaches for the Chinese athletes, this is a well spread practice in FIAS. We are also ready to accept Chinese athletes in Russia. We can arrange training camps, hold coaching and referee seminars, can assist in providing athletes with the necessary outfit, and quite soon, I am sure the Chinese athletes will be able to take part in international competitions held under the aegis of FIAS."

"We are pleased to help and provide our coaches for the Chinese athletes, this is a well spread practice in FIAS".

It should be noted that the International Sambo Federation has already sent its experts to the Celestial Kingdom to hold Sambo training camps. For example, in 2012, FIAS representatives helped the Chinese team in their preparation for the Universiade in Kazan. This work resulted in not only merely decent participation of the Chinese athletes in the Student Games, but also in winning of the bronze medal for their country.

Such a rapid result of the Chinese in Sambo has an easy explanation. Martial and combat arts have been developing over ten centuries in China. The most popular martial arts include wushu, judo and taekwondo. But until recently such a powerful country hardly knew anything of Sambo. Today, however, the situation may change.

"I believe Sambo is a very good sport with a combination of wrestling and judo. We know this is a traditional Russian martial art and there is a section of Sambo at Peking University. We are very pleased that Sambo develops successfully in China as well- said Cai Zhenhua. - We appreciate the work of FIAS in promoting Sambo and plan to work on the development of this sport in our country".

"We appreciate the work of FIAS in promoting Sambo and plan to work on the development of this sport in our country".

Vasily Shestakov stressed that China is the world sports leader with notable sports results in various sports. "In 2014, Sambo continued its active development in the world, and by the way it was very successful in Asia. Earlier this year, our martial art was recognized by the Olympic Council of Asia and was included into the Asian Games. This November Phuket will see the start of SAMBO tournament included into the program of the Asian Beach Games", - said Shestakov.

As to China, FIAS started the development of Sambo in this country back in 2011. "In this regard it is worth noting the commitment of the Director of the Center for the Sports Training of the National Teams - Professor Yang Binche, and the manager of the project" Sambo in China "Igor Radchenko. Professor Ian Binche has created favorable conditions for the formation of the team and its preparation for the Universiade in Kazan,"- said FIAS president.

"In 2014, Sambo continued its active development in the world, and by the way it was very successful in Asia".

"I think we will fully explore Sambo and try to start its active development - said Cai Zhenhua. – We will appoint persons responsible for this sport, as well as study the experience of Professor Yang Binche gained in the Center for Sports Training of Chinese Teams. It is possible that athletes from the related sports will try themselves in Sambo to fight at the international level".