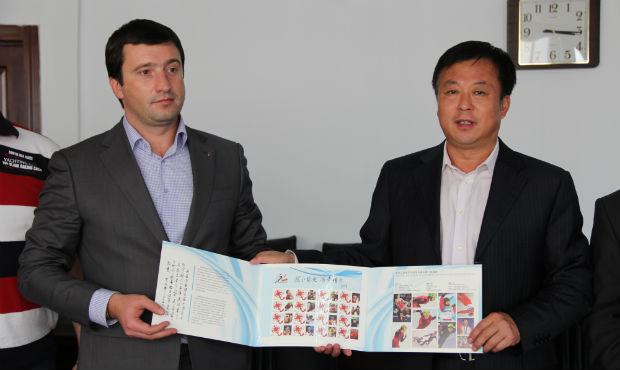 Head of FIAS Presidential Administration Aleksey Gradov made a working visit to Heilongjiang Province. The name of Heilongjiang Province literally means "Black Dragon River". It's worth noting that 80 % of Chinese Olympic Champions originate from this region. The Province has a common border with Russia and its total length exceeds 3,500 km. Perhaps, due to the neighborhood with Russia such originally Russian sport as sambo has established itself in the region and successfully continues to spread there.

FIAS management had a chance to ascertain this fact by meeting with the Head of the Province’s sport administration, Mr. Guo Ming Yu. A number of important decisions were made according to the results of meeting between FIAS representatives and sport management of the Province. The possibility for Chinese sambo athletes to participate in the World Championship in Narita, Japan, will be considered in the nearest future, and coaches from the Celestial Empire will have a chance to undergo training in the home country of “self-defense without weapons” – in Russia. Moreover, it is planned to place a Russian specialist among the coaches of sambo clubs in Heilongjiang Province who will help to improve both the athletes’ level of tactics and techniques and the coaches’ professional skills.

Following the results of these negotiations, Chinese party decided to consider a possibility to organize a Sambo Federation of the People's Republic China in the Heilongjiang Province itself as long as it is the most active sambo Province of China. The next step is to approve this initiative with the management of China’s Main State Directorate of Sport.