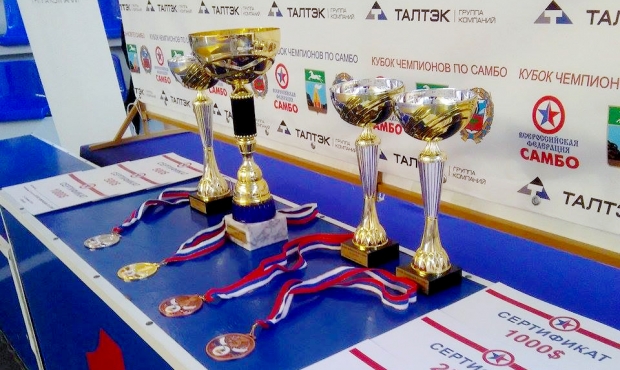 A unique event — the Champions Cup — took place today in the Pobeda Sports Complex in Barnaul, Russia. The format was 11 people, all champions and winners of world and continental championships, in the 100 kg weight category, 5 participating countries, and solid cash prizes of $4,500 for the gold medalist, $2,500 for the silver medalist, $1,000 for bronze medalists, and $500 consolation prizes for SAMBO wrestlers who lost the fight for 3rd place. Read all about the passions, throws and winners in today's report.

Georgian David Loriashvili won the gold medal in the tournament, proving that his title at this year's World Championship in Morocco was well deserved, and today he is the unquestioned leader of world SAMBO in this weight category. On his way to the final, David defeated Belarusian Vasily Kuznetsov; and in a tough fight in the 1/4 final, he was stronger by a margin of only 1 point than Russian Sergey Samoilovich, bronze medalist of the World University Games in Kazan and World Championship medalist.

But the most striking, spectacular and dramatic fight was definitely the semifinal match between Loriashvili and Russian Arsen Khadzhyan, 3-time European champion and 2014 world champion, but in the weight category up to 90 kg. People were saying it was worthy of final. And it really was. The start of the match favored Khadzhyan, who "pleased" the audience with both a perfect combination of an over the back throw with clinch of both arms — an inside undercut throw under the same leg — and a pickup throw under one leg, leading almost the entire match with a score of 7:2. Maybe Arsen didn't have enough "physics", though he was used to "beating" fighters a little lighter than 100 kg, or maybe it's hard to reach the peak of fitness early in the season. We should note that all the SAMBO wrestlers looked a bit heavy today, but this is understandable, since the first major start — the A. Kharlampiev Memorial World Cup — is another 2 long months away, and everyone is stressed out and just entering the season. So even though he was losing to Khadzhyan 2:7, the Georgian was able to win. One minute before the end of the fight, with an overhead throw for 4 points and several attacks to the legs, he not only managed to level the score, but also take the lead. It was 9:7 on the scoreboard, and Loriashvili moved to the final.

Belarusian Andrey Kazusenok, 4-time world champion, multiple winner of world and continental championships, was waiting for him there. On the way to the final, Kazusenok won a TKO over Russian Eduard Kurginyan, European champion and multiple world championship winner, "cheering him up" with several technical overhead throws. In the fight for the final, Andrey was stronger than the 2014 world champion, Russian Dmitry Eliseev. A point for the throw with leg clinch, and overall Kazusenok fought skilfully, closely and technically by constantly attacking and preventing the Russian from attacking.

So in the final, it was Loriashvili against Kazusenok. At the start of the fight, David made a very effective and spectacular counter throw — an inside hook under the same leg — and then attacked during the whole match, beating the Belarusian , both in holds and in the speed of attacks, going on to win the prestigious tournament with a score of 3:1. Sergey Samoilovich and Arsen Khadzhyan were on the third lines of the final Champions Cup protocol.

You can view all the Champions Cup fights here: https://www.youtube.com/watch?v=T96lQWvQbYA