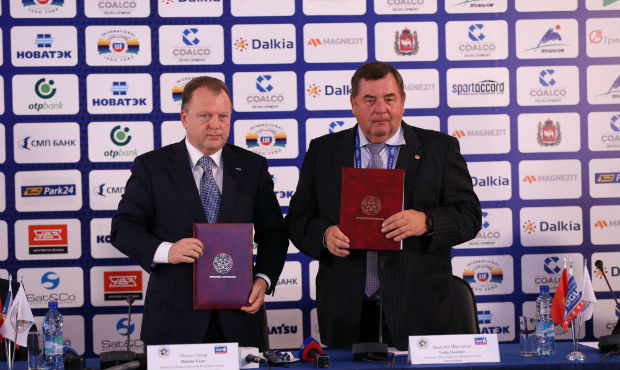 Mr. Vizer expressed his hopes that the collaboration will help sambo to enter the Olympic program. “As a result of continued negotiations, we have reached an agreement on cooperation between judo and sambo,” Mr. Vizer said. “We belong to one family, we share the same values. This agreement provisions one-year collaboration and can be prolonged. We seek to develop our friendship and marketing, to cooperatively work with mass media. We would like sambo to become more and more independent kind of sport. I wish sambo to achieve recognition of the International Olympic Committee (IOC). We hope that our cooperation will help sambo achieve this status.”

Vasily Shestakov noted that Sportaccord organization led by Vizer has also supported sambo in this field. “I would also like to mention the support of FILA (International Federation of Associated Wrestling Styles) and its President Nenad Lalovic. We will do our very utmost to live up to expectations of these organizations.”

FIAS President stated that judo is an example for sambo to follow. “Sambo and judo are fraternal sports, and we would like to achieve the same level as judo,” emphasized Shestakov. “We observe how the world’s judo works and it poses an example for us”.

Vasily Shestakov also reminded that this week sambo has been recognized by the European Olympic Committee and has been included into the list of twenty sports that will be competing at the first European Games in 2015 in Baku.