FIAS official news: the Asian one and not only 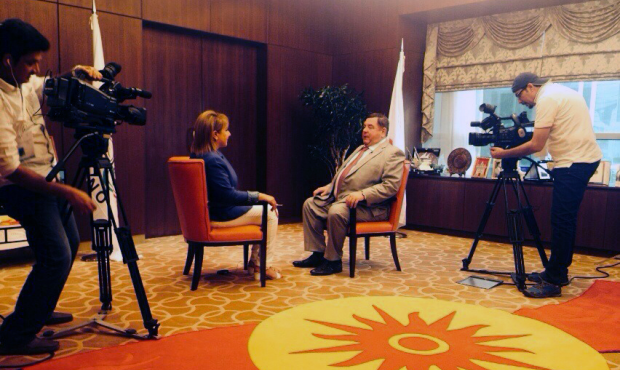 These days in Kuwait the regular General Assembly of the Association of National Olympic Committees (ANOC) is held, Sheikh Ahmad Al-Fahad Al-Sabah was elected to its Presidency in Moscow two years ago. FIAS delegation was invited to the most important event in the world of the international sports in which frameworks a series of official meetings was held. A meeting with Head of the ANOC, Sheikh Ahmad Al-Fahad Al-Sabah was, of course, central of them. Recall that in January this year the Olympic Council of Asia, which since 1991 Ahmad Al-Fahad Al-Sabah has headed, recognised the Asian SAMBO Union and SAMBO as a sport at the Assembly in Manila (Philippines). It is the joint work of the Olympic Council of Asia and the Asian SAMBO Union that the FIAS representatives – the President Vasily Shestakov, Alamzhon Mullaev, the President of the Asian SAMBO Union and Michal Buhel, Head of the FIAS Office in Lausanne – discussed at the meeting with the Asian Olympic leader.

Sheikh Ahmad Al-Fahad Al-Sabah and FIAS delegation also discussed the upcoming SAMBO participation in the program of the Beach Games, which will be held on the Thai island of Phuket in November this year. There were negotiations on the details of SAMBO participation in another multisport event of the continent – the Asian Indoor Games and martial arts, which will be held in Ashgabat (Turkmenistan) in 2017. The Sheikh was also interested in the project patronised by Vasily Shestakov – the International Scientific Congress “Sport. People. Health”. Recall that research activities of the Congress in the field of martial arts were presented as part of the cultural program of the II SportAccord World Combat Games in St. Petersburg (Russia).

During the meeting Sheikh Ahmad Al-Fahad Al-Sabah noted that last year the International SAMBO Federation made a tremendous breakthrough in SAMBO development and advancement in Asia and the world, and its inclusion in the program of the Asian Games – a natural process and confirmation of the increasing attention to SAMBO on the Asian continent.

Then FIAS delegation took part in the informal dinner with Thomas Bach, the President of the International Olympic Committee (IOC). Within the negotiations with Head of the IOC Vasily Shestakov discussed interaction between FIAS representatives and Christophe Dubi, Director General of the IOC, and Keith McConnell, a new IOC Sports Director, as part of work on the bid book of the International SAMBO Federation. The official meeting of the FIAS President and Head of the Olympic sports will be held a week later. The leaders – both of the IOC and FIAS – agreed to meet within the SportAccord Convention on April 8, which begins its work next Monday in Belek (Turkey).

There also will be held a meeting of Vasily Shestakov with Marius Vizer, Head of the SportAccord and President of the International Judo Federation there. In Kuwait, Vizer and Shestakov discussed details of the agreement on cooperation between the two sister International Federations – judo and SAMBO, signing of which is scheduled for April 7.

Not only the leaders of the modern sports, but also the media showed interest to SAMBO. An interview with Vasily Shestakov, the FIAS President, to the world’s largest TV channel Aldzhazira became one of the outcomes of this interest. In the near future a special program where Shestakov told about SAMBO, its history and origins, modern development and achievements, globality and uniqueness of this combat sport, will be aired on television in the Arabic and English languages.

We will tell you another batch of official news of the International SAMBO Federation from the Turkish Belek as early as in a week. FIAS delegation participation in the SportAccord Convention and Exhibition, which is traditionally held in the framework of the major international sports event, will become the reason.