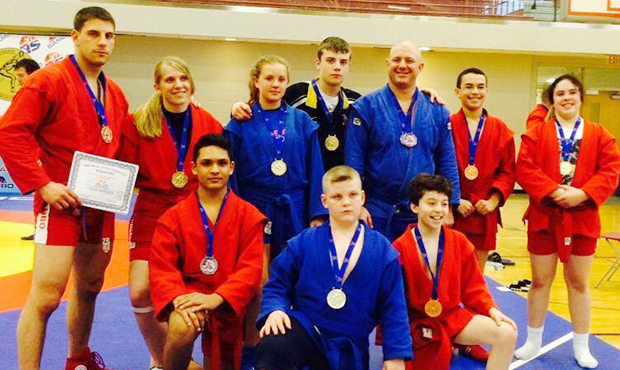 The U.S. National Sambo Championship took place on April, 12 at the Asplundh Field House sports complex. This is the first championship for the local Sambo Federation - USA Sambo Inc. - as a member of the International Sambo Federation. Following the tournament one should say that the debut was a success - the number of participants, the level of organisation and the sports component rose to the occasion.

The Asplundh Field House Sports Complex is in a suburb of Philadelphia (state of Pennsylvania), the city of Bryn Athyn. The cosy sports hall hospitably hosted athletes from across the country, who came to check who was stronger. The competition was attended by about 100 sambo athletes, which is comparable to the sambo tournament in the programme of the Arnold Sport Festival known as the largest multi-sport festival that has been held recently in the United States.

Distinguished guests also attended the tournament which does prove its level. Among them was member of the City Council for Special Affairs David Oh. At the ceremonial opening he presented a Certificate of Honour to President of USA Sambo Inc. James J. Binns. Commander of the Mid-Atlantic Battalion of the U.S. Army lieutenant colonel Brian Davis and member of the Board of Directors of the Greater Philadelphia Chamber of Commerce Kenneth Wong also visited the tournament.

The tournament was attended by athletes who have been engaged in sambo for a long time, and by those who practice related martial arts and only watch our favourite sport. Judging by their opinions, everyone liked the sambo competition, so the next wave of interest in sambo may happen and the number of athletes will increase in the American Sambo clubs.

- All participants enjoyed our martial art. The tournament brought together athletes who have come from different disciplines. And when seeing their reaction, I can say with confidence that sambo has the future in the U.S., and we will be able to achieve good results, - first vice-president of USA Sambo Inc. Mikhail Kozitskiy shared his impressions.

He also expressed gratitude to the people “without whom this event could not take place.”

- Being the good athlete in the past (silver medalist of the 1990 World Junior Championship, multiple winner and medalist of U.S. sambo and judo Championships), Dr. Roman Zinder acted as the Secretary of the competition. His contribution, as well as that of his assistants Michael Hall and Joseph Cianfarra, is hard to overestimate. And, of course, I would like to note the work of the referees under the guidance of Chief Judge Mikhail Zhidelev. They judged impartially and gave us the sports festival, - Mikhail Kozitskiy summed up.

[Photogallery] USA Open Sambo Championship 2014
Tags:
Share
News on the topic
Blog
Recent photos
Latest news
Recent videos
Latest news
Follow latest news You are subscribed!
Thank you! Your confirmation email has been sent to your email.
This website uses cookies to ensure you get the best experience on our website More info Got it!